The 17 Scandalous Affairs That Shook the White House | 22 Words 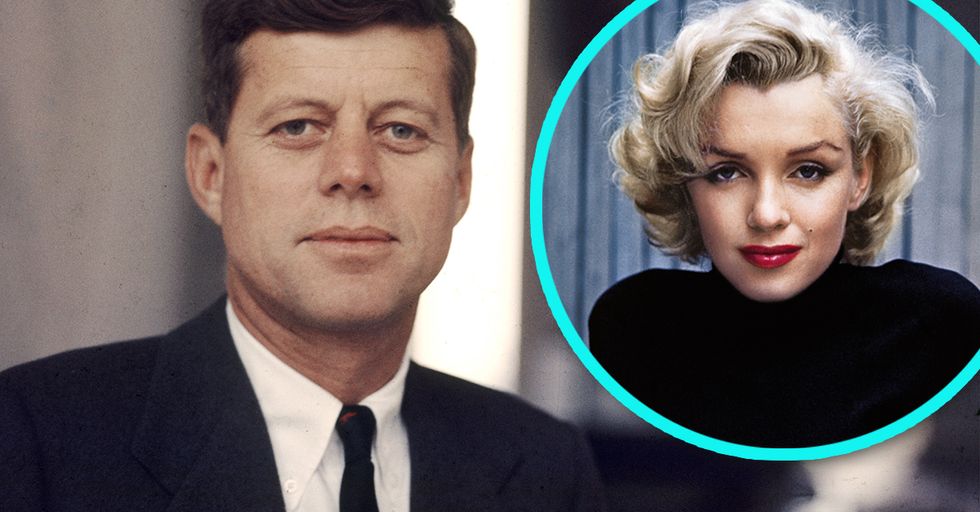 The 17 Scandalous Affairs That Shook the White House

Except for a few notable exceptions, Presidents have always had their First Ladies. The position of First Lady is an institution. So, however, is the presidential mistress. Most presidents, with very few exceptions, have had women (or men) that they had affairs with.

Here are the most notable ones.

1. George Washington probably had an affair with a slave named Venus

Our nation's founding president is rumored to have had a relationship with Venus, a mulatto slave owned by his brother, John Augustine Washington and his wife, Hannah.
While this has never been confirmed, Venus had a son named West Ford, who she said was Washington's, and the boy served as Washington's personal attendant. They were so close, Ford often accompanied Washington to church, where he had a private pew.
Once Washington became president, however, he stopped visiting Ford in public. Descendants of Ford are hoping to use DNA evidence to prove their claim.

2. Thomas Jefferson had an affair with 14-year old Sally Hemings that spanned decades

George Washington isn't the only founding father to have had relationships with slaves, the nation's third president, Thomas Jefferson had a notorious affair with the mulatto slave Sally Hemings which spanned generations and at least six children.
Visitors to Jefferson's home always noted a large amount of very fair-skinned slaves in the household who had striking resemblance to Jefferson.
DNA evidence would later confirm that the founding father indeed had an entire black family – although many of Washington's children were so fair-skinned, they eventually married well into white society.

3. John Tyler probably sexually exploited his slaves and sold his own children

In December 1841, editor Josua Leavitt wrote an article in the abolitionist newspaper The Emancipator accusing John Tyler of sexually exploiting at least one of his slave, the implication being that there were many more.
Tyler is the most fruitful president ever, having fathered 15 children on two wives. In the article, Leavitt accused Tyler of fathering two mulatto sons with of one of his slaves and selling other slave children.
Specifically, Leavitt wrote that it was "altogether probable that he had supported his family by selling the increase of his slave stock."

4. Abraham Lincolna had a hot and heavy relationship with his male bestie, Joshua Speed

Debate has raged for years as to whether Abraham Lincoln was gay or bisexual. Two things are certain, however.
The first is that he had four children with wife Mary Todd. The second is that he spent several months per year practicing law on the circuit. Oh, and he slept in bed with a man, his close friend, Joshua Speed.
One writer, Carl Sandberg, who wrote a 1926 biography of Lincoln, described the pair's relationship as having "a streak of lavender, and spots soft as May violets." "Streak of lavender" is a euphemism for effeminate men. Well...

1884 saw one of the ugliest elections in United States history. Why? Because the Evening Telegraph broke the news that presidential candidate Grover Cleveland had paid child support to a widow named Maria Crofts Halpin for her son Oscar Folsom Cleveland.
Things took a turn when Cleveland admitted to the affair, adding that Halpin was a whore who slept with many of his friends and that he'd been an honorable man who took care of her child, even though he wasn't sure it was his.
Halpin, who had been forcibly committed to an asylum after giving birth, had a different and more horrifying story. As the Tribune explained:

Halpin said that Cleveland had pursued her relentlessly, and that she finally consented to join him for a meal at the Ocean Dining Hall & Oyster House. After dinner, Cleveland escorted her back to her boarding house. In an 1874 affidavit, Halpin strongly implied that Cleveland’s entry into her room and the incident that transpired there was not consensual—he was forceful and violent, she alleged, and later promised to ruin her if she went to the authorities.

That one feeling you get in the bottom of your gut, there's a word for that! WATCH THIS VIDEO to see 10 emotions that actually have a word for them.

When you think of Warren G. Harding, a stern face and distinguished bearing comes to mind. But did you know old Warren G. was a complete and utter horndog?
In the 1890s, when Harding was still a senator, his wife, Florence Harding, had a close friend called Carrie Fulton Philips, who was so pretty, she was the model for the Gibson Girl, considered the epitome of beauty in the day.
Harding and Philips engaged in a sultry affair, which culminated in hundreds of very steamy love letters written on Senate stationary. When Harding became president, Philips successfully blackmailed him into paying her a stipend for the rest of her life to prevent the letters from getting out.

Warren G Harding's horndog ways did not stop with Carrie Fulton Philips. When he was 50, an Ohio teenager named Nan Britton became infatuated with him and would sit on his lap whenever she came to visit.
Things quickly took a turn for the scandalous when Harding took Britton to a New York Hotel to take her virginity. After the deed was done, the cops burst in, but they quickly backpedaled when they discovered who they'd busted.
Harding and Britton continued their affair for six years, and she even had a child by him, for whom he paid child support until his death. He even once told reporters, “It’s a good thing I’m not a woman. I would always be pregnant. I can’t say no."

8. James Garfield had an affair with the thoroughly modern Lucia Calhoun

In the 1860's, James Garfield was a busy man, fighting in the Civil War and waiting between that time for assignments in Washington.
It was in this period that he met Lucia Calhoun, a thoroughly modern New York Times journalist who had once opined, "The remedy seems to be to give women as thorough mental training as men receive, to make their training tend directly to the business of earning their bread and their pretty feminine adornments, and for the same work to pay them the same wages."
After some time, Garfield was struck by guilt and eventually came clean to his wife about his affair, who gave him an ultimatum – the mistress or me. Garfield chose his wife – a smart choice, considering Calhoun was now already engaged. Garfield was, by all reports, never unfaithful again.

9. Dwight D. Eisenhower had a passionate relationship with his chauffeur Kay Summersby

During the last year of the World War II, then Supreme Allied Commander Dwight D. Eisenhower had a very striking chauffeur and personal secretary – a former model named Kay Summersby.
A member of the British Mechanised Transport Corps, Summersby spent a lot of time with Eisenhower, a man years her senior. This personal time eventually led to romance.
In her autobiography, Past Forgetting: My Love Affair with Dwight D. Eisenhower, Summersby alleges that they went on dates and kissed but did not have sex because Eisenhower couldn't get it up.

10. Franklin D. Roosevelt has an affair with his secretary Lucy Mercer

In 1914, Eleanor Roosevelt hired Lucy Mercer, the daughter of a once-prominent family fallen on hard times, to be her secretary. Roosevelt and Mercer were close friends. What she didn't realize was that Mercer and her husband were more than that.
Eleanor Roosevelt found out about the Mercer affair when she discovered letters between Mercer and her husband.
Furious, she offered him a divorce, but Roosevelt refused, fearing for his career. He stayed with Eleanor, but continued the affair with Mercer until his death in 1945. Mercer was even in the room when he died.

11. Eleanor Roosevelt has a steamy affair with journalist Lorena Hickok

FDR wasn't the only member of his household to engage in affairs. Decades later, Eleanor Roosevelt would find her own passion... with a woman.
Lorena Hickok was the most successful female journalist of her era, covering political stories for the New York Times. After she did some stories on Roosevelt, the two of them quickly became pals, then besties.

And, of course, they were lovers. During the 30 years they were together, the women wrote almost 4,000 letters to each other. Here is an excerpt from one Eleanor Roosevelt wrote:

“Hick darling, All day I’ve thought of you & another birthday [when] I will be with you, & yet to-night you sounded so far away & formal, oh! I want to put my arms around you, I ache to hold you close. Your ring is a great comfort, I look at it & think she does love me, or I wouldn’t be wearing it!"

For a solid decade, Pennsylvania Senator James Buchanan – the man that would become known as the worst United States president ever – spent all his time with then-Alabama Senator William Rufus King. The pair even lived together and were seen everywhere together.
President Andrew Jackson is alleged to have referred to the pair as "Miss Nancy and Aunt Fancy." When King left to become the U.S. minister to France, Buchanan was devastated.
"I am now 'solitary and alone,' having no companion in the house with me," he wrote his friend, Cornelia Roosevelt. "I have gone a-wooing to several gentlemen, but have not succeeded with any one of them."

13. John F. Kennedy has a one-night stand with Marilyn Monroe

Marilyn Monroe was known as the most desirable woman of her era. John F. Kennedy was the most powerful man of his time...
And one of the most sexually rapacious presidents ever. It was inevitable they'd have an affair. But strangely, it didn't last that long.
According to biographer Donald Spoto, Monroe and Kennedy consummated their mutual lust on March 24, 1962, during a party at Bing Crosby's Palm Springs home. Her friend and masseur, Ralph Roberts explained,

"Marilyn told me that this night in March was the only time of her 'affair' with JFK," Roberts said. "A great many people thought, after that weekend, that there was more to it. But Marilyn gave me the impression that it was not a major event for either of them: it happened once, that weekend, and that was that."

Monroe, apparently, knew he was a massive flirt, and didn't want to settle down with a man like that.

14. John F. Kennedy has an affair with Jayne Mansfield

Marilyn Monroe wasn't the only blonde bombshell JFK had an affair with. He also hooked up with her frequent competitor, Jayne Mansfield.
Mansfield made it her mission to sleep with JFK, and Peter Lawford, JFK's brother-in-law and a member of the Rat Pack, facilitated the affair,
Mansfield, unfortunately, didn't get everything she wanted out of it. She complained, "And once he's done, he's done; it's like you don't exist any more!"

15. Bill Clinton has an affair with Monica Lewinksy

It was the affair that shook a nation. In 1995-1996, President Bill Clinton had an affair with White House intern Monica Lewinsky.
The pair conducted their affair in the Oval Office until Lewinksy's supervisors began fearing she was spending too much time with the president, and transferred her to the Pentagon.
When an inquiry started into the allegations, Clinton famously declared, "I did not have sexual relations with that woman." A soon-to-be infamous blue dress proved him wrong.

16. Donald Trump has an affair with Stormy Daniels

17. Donald Trump has an affair with a playboy model

Former Playboy Playmate Karen McDougal detailed her affair with the president, which lasted from June 2006 to April 2007, around the same time that Trump conducted an affair with Daniels.
Trump was reportedly very careful not to leave any financial trails and would reimburse her after she booked hotels and flights. He also offered to pay her for the sex – an offer she declined. The president called the allegations fake news.