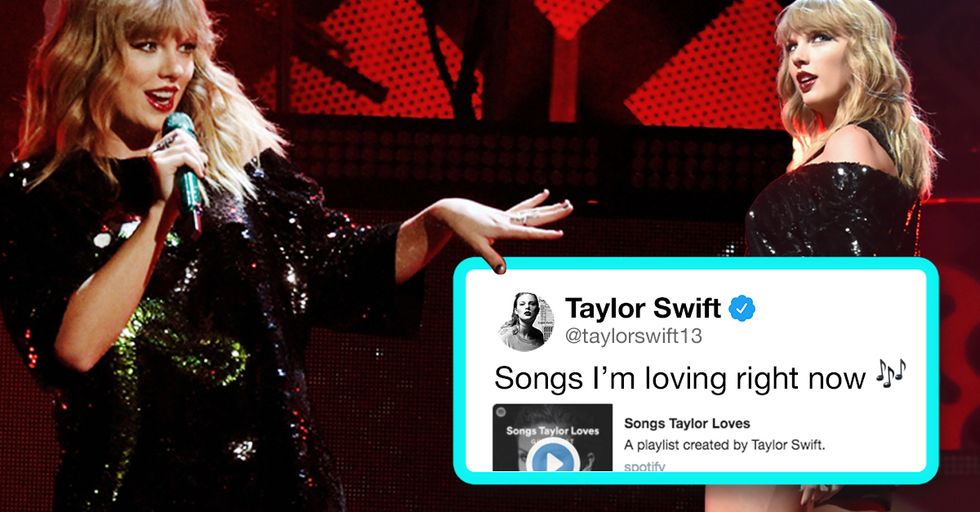 Taylor Swift is known for her music tastes, and she's been introducing the world to new musical talent for years. For instance, she was one of the first early champions of Grammy winner Alessia Cara, whose song "Here" dominated the 2015 airwaves. Now, Swift is back with a just-released Spotify playlist, and while there are some familiar songs on it, like her very own "Delicate," there are lots of songs to listen to from newer, not as established artists.

We could reorder the playlist to show you which songs we think is the best, but this is Taylor Swift's playlist, and she knows best. So here are her top 20.

Singer-songwriter Bazzi just hit the Billboard Hot 100 chart with "Mine," which debuted at No. 56. The song's sudden popularity was due to an internet meme which focuses on the lyric "You so f**kin' precious when you smile." Bazzi reached out to Swift on Twitter saying, "woah. hi @taylorswift13

"Rhythm of Your Heart" - Marianas Trench

Canadian pop rock band dropped this eighties-sounding single in December. It's a complete departure and definitely would not sound out of place in your fav eighties playlist.

British singer-songwriter Rex Orange County – real name Alex O'Connor – originally wanted to be a drummer, but then realized he wanted to be at the front and not the back of the stage. This is the result.

Taylor Swift must really like LANCO because here they are again, this time with the song "Win You Over." They reached out to Swift via Twitter to say, "Ooh this playlist has a “big reputation". Thanks for the love @taylorswift13!"

Country music duo Dan Smyers and Shay Mooney somehow manage to make the word "tequila" sound heart-breaking and lovely in this ode to bravery and love.

Cash Cash is an electronic dance music (EDM) group from Roseland, New Jersey, Dashboard Confessional is a rock group from Boca Raton, Florida. Together, they made this dreamy song that has hints of eighties influence.

"There Are Many Ways To Say I Love You" - Sylvan Esso

Since their debut with the eponymously titled album, Sylan Esso, the pop duo from Durham, North Carolina have been releasing songs left and right, and this is one of their newest efforts.

Yoke Lore is a musical project by artist Adrian Galvin, and "layers the harmonies of Panda Bear, the soulful beats of M83, and the modern pop of Blackbird Blackbird to tell 'the stories of how we are bound.'" We honestly don't know what that means, but the song is a pretty good cover of Savage Garden's original track.

Androgynous artist Børns is often mistaken for a woman at first glance (an appeal that has led to a collaboration with fashion house Gucci) but no one can deny his sugary sweet vocals, especially not in this track.

Charlie XCX is one of the more familiar names on this list, but Jay Park is a Korean rapper not as well known the United States, although that's rapidly changing.

This one is a bit of a claim by Brooklyn duo Eighty Ninety, whose debut single Three Thirty catapulted to No. 2 on Spotify's Global Viral Chart. Honestly, it's an okay song, but decidedly not our favorite.

This song by Los Angeles electric-dream-pop duo Allie McDonald and Mike Derenzo is a dreamy remembrance of past love.

Singer/songwriter Woodson Black is at number fifteen with this ode to German city Cologne. He explains:

There was a certain magic about Cologne. It struck me as a place that I might've had another life in if I hadn't lived the life I have. When I was back home, off tour, I remembered that feeling and tried to imagine a life there and the story of what might have been.

American country group Lady Antebellum has been churning out the hits ever since they joined together in 2006. This is another of theirs. Video's pretty good too.

This sleek and seductive entry from the Fifty Shades Freed soundtrack features the very suggestive lyric "They say good boys go to heaven/But bad boys bring heaven to you." Well.

"Always Be My Baby" - Anderson East

We never thought there could be any improvement to Mariah Carey's "Always Be My Baby," but rhythm and blues musician Anderson East (real name, Michael Cameron Anderson) proved us wrong with this raspy reggae rendition.

This feel-good ode to enjoying life by G-Eazy & Kehlani could easily be 2017's answer to the "I Got a Feeling" of earlier years Black-Eyed Peas.

Here is the entire playlist

We skipped Swift's original number 19 because it's her own song, "Delicate." By the way, super baller of her to add herself to her own playlist, but then, if you don't enjoy your own music, don't expect anyone else to either.