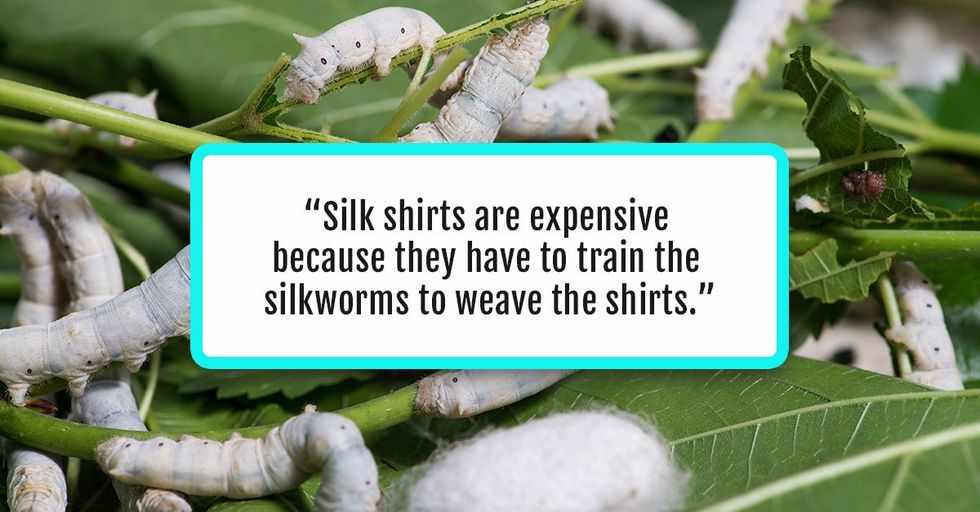 We all have our moments of idiocy. But not all of these moments are created equal. Some are truly astounding.

In this Reddit thread, people shared the dumbest things that others have said to them 100 percent seriously, without so much as a wink in their eye. So read on because this list will definitely make you feel better about yourself.

Silk shirts are expensive because they have to train the silkworms to weave the shirts. –jigga19

My grandma was talking to me and my sisters about how Tom Cruise was running for president. –superchid3 Pretty sure she meant Ted Cruz...
I girl I once knew said she didn't drink water because it dehydrates you. She would only drink sports drink. –CoolnessEludesMe
I was at court, using the restroom. Someone in the stall was talking on their phone. "Of course they dropped the case, I told you they would... we should go out and celebrate, maybe have some shots... no, it won't hurt the baby at all." –Hoarf If you think that's bad, you'll get a kick out of the next one...

A girl I used to go to school with in Oklahoma said we should road trip... to Japan. Me: ...How would we get to Japan in a car? Her: You know, from Cali! Me: ....... Her: We would use the bridge that goes from California to Japan! Me: .....Do you seriously think there’s a bridge that goes from California to Japan? Her: ....That’s what my mom told me. I never really thought about it. –StrompyFrimp
I work in an Escape Room so I have a lot. But the best one is probably when the group got a code 1337 to put into a lock, and a woman went looking around for places to use it. She found the lock the code went too, but said it wouldn't fit because the dials were only 0-9 and that they didn't go up to 13. –coconut2219

Was talking with a friend and told her I was tired because I only slept about 4 hours last night. She responded, "yeah me too, I only slept from 12 am to 8 am... but I don't know how many hours that is..." –Seanininho

"Why do you think I grew up so rich? We weren't rich. It's not like our staff lived with us or anything." –angrystan Infuriating, sure, but this next one is going to blow your mind...

When I was in law school, they were increasing security in the building. They let us vote on whether we wanted key fobs or ID cards. I heard some 1L students engaged in a conversation about how the key "swabs" would be too much of an invasion of privacy, and how at least the ID cards wouldn't require a DNA sample. I'm pretty sure they thought they took a cheek swab and had to match your DNA to get in the building. –thecapedemancipator

On a European vacation my step mom thought the Louvre was "The Lube", the Eiffel tower was the "Awful Tower", then she asked "Where the hell are we?" we answered we're in Venice, Italy, she responded, "I thought Venice was in Paris!" Oh, she also thought the Sistine Chapel was the sixteenth chapel and asked what happened to the first 15. –boobsalad

I work at Home Depot, paint dept. Customer: hey this tarp is 8x11, but I need one that’s 11x8. Me: (laughing) that’s funny Customer: (deadly serious look) Me: wait are you serious? Customer: yeah, I’m f—ing serious Me: um, just turn it. Customer: oh, just turn it huh guy? I’ll go to Lowe’s and find someone who knows what the f—- they’re talkin about. Me: (laughing again) ok, dude. I still doubt someone out there is that stupid. I wonder if I was just being messed with. –jagdbogentag

My sister, in Canada..."I’ve always wanted to see how they celebrate 4th of July in another country." –dcappy3

A girl I had class with in college said she gave up carbs for lent... she wasn't Catholic... her solution was to eat BREADED fried chicken because the breading was "basically nothing" –Vipernadiaper Oh, we're not done yet...

"I'll get a gluten-free pizza and a pitcher of beer" –Johnny2Steaks Um yeah, beer definitely has gluten in it.

Ah, dear Anita... "I don't know how anyone could use recycled toilet paper, that's just gross!" Someone had to point out it wasn't used toilet paper being used again. –yogorilla37

During a trip to America, I visited a restaurant called Noble Romans. The kid working there told me I had a funny accent. I told him I was English. He replied ‘your English is pretty good, what do they speak over there?’. –[deleted]
"I quit my job because no boss is going to tell me what to do" –RedRoscoe1977 Definitely not with that attitude!