The 23 Most OMG Twist Endings in Movie History | 22 Words 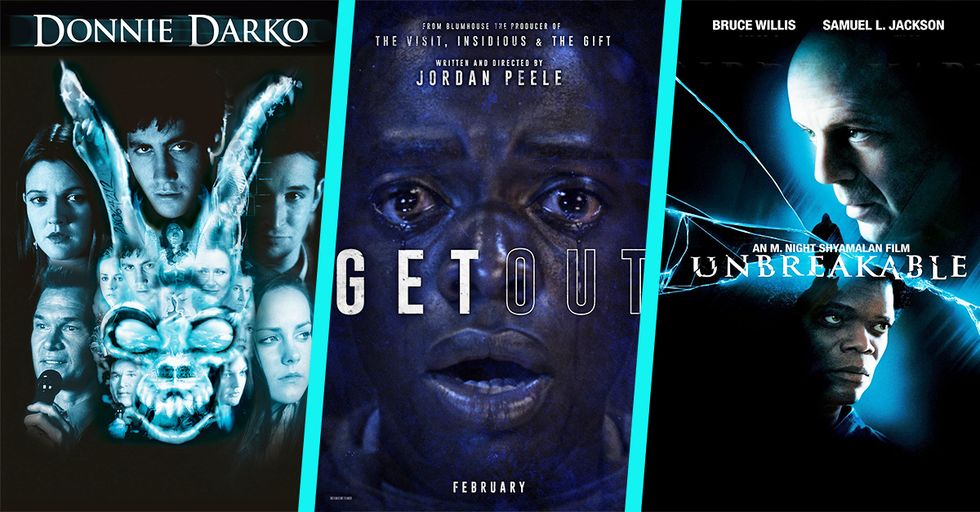 The 23 Most OMG Twist Endings in Movie History

There's always that one friend who can predict the ending to any movie ever and always leaves feeling proud of their accuracy. Deep down they are probably devastated because there are no surprises in their life. But there are a handful of great movies out there that have a serious plot twist, good and bad, and have left most viewers speechless.

It seems surprise endings are becoming less common in theaters, maybe because it is getting more difficult to surprise viewers. Sometimes it seems like you can guess the ending within the first ten minutes. But these are some classic, modern and unexpected films that, for the most part, created quite a sense of awe from viewers.

There was no way to see this one coming. Or maybe there was and I was just totally blindsided. The thrill and creepiness throughout this movie is enough to keep your attention, even if you were slightly confused majority of the time. For a moment, this movie has you thinking that you might be the one losing it.

James McAvoy I think surprised himself in this movie. So much was happening, so many characters to meet--I don't think anyone knew what was going to happen in the end because it was all over the place. Once Kevin started eating people... yeah I don't think anyone could have seen that coming.

Maybe not an incredibly complicated ending but it's still pretty messed up. I mean, who dresses up like monsters to keep people trapped in a crazy village? The elders in this village use fear to control their townspeople and restrict them from living normal lives outside of their village. I was mostly just mad at the elders for being crazy jerks and scaring their friends and families; that's just mean.

*Still shivers when thinking of this movie* In 1999, when this film was first released, I don't think anyone could have seen this ending coming. Even today it still has first time watchers shocked. This is truly a surprise ending, in every way possible. When you watch this movie for the second time, which I highly recommend you do, you notice so much that you didn't see before, like the fact that Bruce Willis' wife is actually ignoring him the whole time because he's dead. Just a classic, creepy plot twist that has scarred many viewers for the rest of their lives.

This movie intertwines stories of people who, on the surface, have next to nothing in common. You follow Will Smith's character, Tim, who is actually pretending to be his brother, Ben. Tim is on a journey of redemption, guilt, shame and sacrifice. The ending is beautiful, tragic and actually makes a lot of sense. Not your average, scary plot twist, but an amazing story of humanity and the urge to atone for past mistakes.

Bruce Willis is at it again with a thriller that has you on the edge of your seat until the very end. This movie is a journey of destiny, survival and what it means to be a hero. Samuel L. Jackson plays an ominous role that ultimately holds the key to what makes this movie so surprising in the end.

Wow. What a film. The ending was intense, creepy and powerful. This is just a movie that gets weirder and better at the same time. This movie created a genre of its own and the response from viewers was overwhelmingly positive. One of the highest rated horror movies on Rotten Tomatoes, the surprise ending left majority of movie-goers freaked out and afraid of anyone who stirs a cup of tea.

The original. The first of its kind. The most disturbing, gory movie that I have ever seen. The first movie really set the tone for the rest of the series that has taken over the gore/horror genre of movies. In the ending, we find out that Jigsaw was actually in the torture room the whole time. Which is just, I mean kind of impossible, but mostly mind-blowing. The overall theme of unreal gore of this movie is what makes it so surprising, disturbing and weirdly addicting for some people.

This movie ends in a surprising tragedy. No one wants to see a man kill his own son. This one is hard to watch; the ending is one that you should rejoice for but are too filled with grief and sadness to be excited when help finally comes to save David, the main character, from the poisonous mist, after it's just a few moments too late.

The title of this movie actually solves a part of the mystery. A lie once told by a little girl ultimately ruins her older sister's life. This movie contains fiction within fiction, the ultimate betrayal of the viewer. The sad, honest reveal at the end of this film leaves quite an empty feeling within yourself, but still worth the watch. Oh, and you'll probably cry so get your tissues ready.

Now You See Me

A movie about magicians? There's got to be a surprise ending. You think you're tracking the whole time, following the frustrated Mark Ruffalo as he tries to stop the magicians. Then you find out he is the ultimate magician and this was all apart of his big, insanely detailed, trick to fool even the best magicians, and the whole world that was watching.

This woman (NOT a girl) is quite literally insane. We find out the orphan that this unsuspecting family adopts turns out to be a 33-year-old with a growth disorder, making her look like a small child. She's creepy, violent and she kills pigeons. No ghosts or gimmicks in this movie, just a scary serial killer woman acting as a little girl who secretly tries to hit on her new adopted father. Fake teeth and a necklace that covers up some serious scars. Yeah, it's weird.

I feel like this was a truly underrated film. A box with a button inside is presented to a family. If they press the button, they get a million dollars, but someone in the world dies, someone they don't know. A pretty simple story line creates an ending that is a combination of everything you didn't want to happen in the movie. Basically everyone loses, lots of death and we find out that money doesn't solve anything. More money, more problems is the theme of this movie.

I want to tell you the ending, but we all know the rules.

I guess this ending makes sense, but it was still a surprise to most of us. I mean, there was no way one guy could have been everywhere at once, doing all that killing by himself. Of course he needed a steady sidekick. Also, that mask is just unbelievably creepy.

A young Jake Gyllenhaal stars in this sci-fi thriller that fools the viewer again, taking us on a psychological rollercoaster ride where a man in a freaky rabbit costume is the one calling the shots. The ending is basically the reason I have trust issues. Baby Gyllenhaal had me fooled the whole time.

Planet of the Apes

The 1968 version probably had the surprise ending of that generation. Creepy monkeys inhabiting a planet that turns out to be earth. This is one of those movies that I hope will never actually be true but part of me thinks it could be...

Another magician movie that *surprises* us with a magical reveal at the end. If having Hugh Jackman and Christian Bale in the same movie doesn't already have you convinced of the awesomeness of this film, then know that the ending will definitely have you hooked. I have been fooled again by the slight of hand of magicians and this time I actually quite enjoyed it.

Will Smith steals the show again with this beautiful story of love, time and death. The ending will most likely have you crying as you find out something you kind of knew all along but were still surprised by. The whole cast commits to a story that defines beauty and regret, shame and healing.

This is one of my favorite movies and the ending STILL GETS ME HEATED. Ernesto de la Cruz cannot be trusted. His "Remember Me" song is a scam! There's still a happy ending to this movie and it's actually much happier than I could have imagined. But I am still pretty upset over de la Cruz's ability to lie.

This movie gets a lot of things wrong, like everything that has to do with scuba diving and the ocean, but the ending really took a turn for the worse. You'll be sweating and nervous basically the whole time and might not set foot into the ocean for awhile. This may not be the best movie ever but at least the ending is intense.

This is not a love story to root for. The ending is kind of graphic and then...just disturbing. All I can say is...poor Ben Affleck.

The Girl on the Train

Similar to "Gone Girl",there is an ending that is quite gory and unexpected. The women in this movie deal with some psychosexual drama and confused relationships. Mix in Rachel's alcoholism (played by Emily Blunt), everything is kind of a blur. A great modern thriller with strong characters, the ending really ties together an all around great film.
I'm sure I missed a few great surprise endings out there, but this covers the basics. Let's hope 2018 is filled with more thrilling endings and less traumatically terrible or pathetically predictable movies.