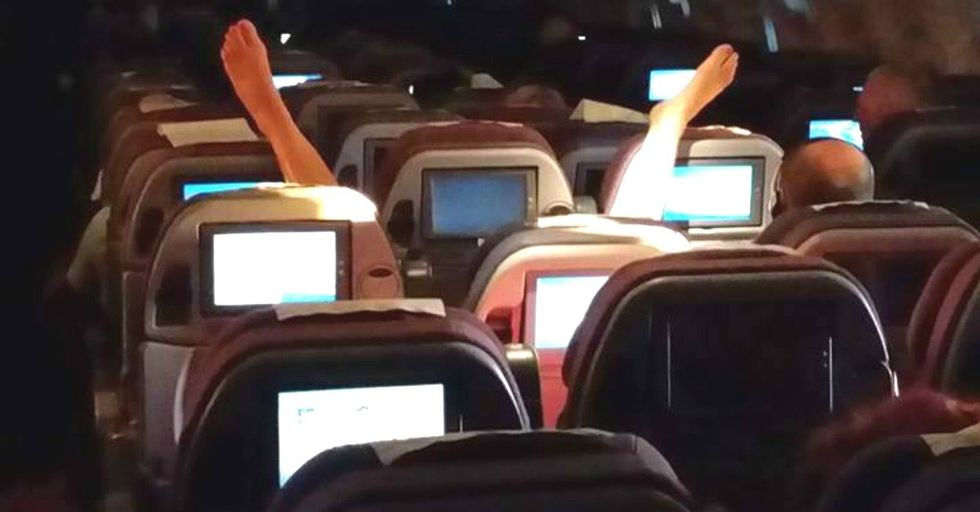 The 35 Most BIZARRE Things That Have Ever Happened On Planes

Not only do planes move big ol' crowds of human beings from one place to another through the air, but those same aircrafts also seem to somehow bring out the very worst in nearly everyone they service. Like, emotionally.

Here are thirty-five times air travel made people get hilariously bizarre on planes.

Honestly... I would have done the same.

This is it. This is as happy as Nick Offerman gets.

Alright. But also, I feel like present-day plane hijackings typically aren't done by people interested in keeping the planes afterwards...

I know the eyeroll whilst facial massaging is what we're laughing it... ...but also, her lips!?

And Then This Happened...

I have so many questions... ...and my heart can handle answers to literally none of them.

Also, though, is it just me... ...or does that statue have a mustache?

And just like that... ...flying over anything but ocean became terrifying.

That’s a Lot of Leg, Brah

I just want to give that dude on the left a hug. And slip the dude on the right's fingers into a glass of warm water.

Trap people between an insanely long security checkpoint line and a delayed flight and these $5 bottles of water just sell themselves! #Capitalism

Best Friends In the Making

Ma'am, I Think You Forgot Something...

You Heard Me, Spread 'Em

Let's be real...Thanksgiving is always just drama drizzled with gravy. If you disagree, you're doing it wrong.

Dude. Be better at personal space.

Planes Are Not Trash Cans!

Flight attendants literally walk up to you regularly asking for your trash, and this is where your gum ends up? No words.

And also probably warts. But life's a give and take.

Okay. Now my heart is broken.

Wait. I need to know this woman.

Omg. This is my worst nightmare.

When You're Finally Honest With Yourself