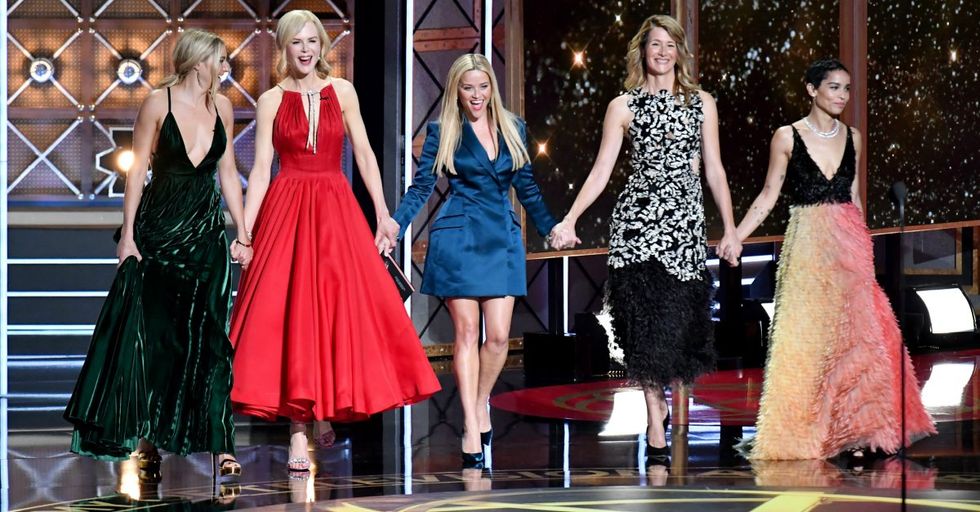 Every year, TV's biggest stars bring their best looks to the Emmy red carpet, and this year was no exception. From the demure to the totally outlandish, these women are all seriously making it work. Whether they won or lost, we think all of these celebs deserve an award for their gorgeous gowns.

Keep scrolling for this year's best dressed at the 69th Primetime Emmy Awards!

Sofia's white hot Mark Zunino dress served curvy goddess realness. Just look at her! The fact that this woman is 45 still blows our mind. She looks incredible, regardless of age. We also love that she brought her son, Manolo, as her date tonight.

Slay, Viola! This orange creamsicle gown is truly the stuff of dreams. To be fair, we have never seen Viola wear something we don't like, but this one takes the cake. The elegant cut and splashy hue make this a winner in our book.

This one is sweet like candy, baby. Yeah, we went there. In seriousness though, this dress feels like a modern take on Audrey Hepburn's iconic black-and-white My Fair Lady gown. Anyone else?

Tessa's technicolor Rosie Assoulin gown shined in every light. The look was somewhere between very chic court jester and avant-garde art piece. Either way, it definitely caught our attention. Check out the next page for even more incredible looks...

This is a dress that would certainly make Jane from Jane The Virgin blush. This red hot Naeem Kahn gown features a plunging neck, long sleeves, and a delicate geometric patterned overlay. Even more beautiful? Gina's confidence.

You may know Sonequa from The Walking Dead but we wouldn't blame you for not knowing that. Her red carpet glo up is real, people. Speaking of red, we love the red of Sonequa's gown, and it looks like we weren't the only ones. Red popped up on the carpet all night in different iterations.

We bow down to Queen Tina always, but this oversized sequined houndstooth look by Carmen Marc Valvo is both understated and elegant. What's so remarkable about Tina is that whether she's in costume as the hapless Liz Lemon or dolled up on a red carpet, she always exudes mountains of confidence. And that's a look we can get behind.

We just did a double-take. Jane? Is that you? We are LIVING for this bold, hot pink gown combined with the fierce ponytail + bangs look. We can only pray to look this good at 79. Keep scrolling for even more stunning looks...

Black-ish starlet, Marsai Martin, might only be 13 but she is already crushing the fashion game. This pale blue number is age-appropriate and seriously stunning. We can't wait to see her fashion sense evolve as she grows up!

First of all, if you're not watching Transparent, stop what you're doing and go binge it on Amazon. Okay, now that that's out of the way, LOOK AT JUDITH LIGHT. Not only can the woman embody the mom of our 90s dreams, but now, at 68 years old, she is blowing our collective minds with these dramatic shoulders and leg slit. Overall, 10/10, Judith.

This slinky Dundas number is sexy and striking, but the double-armed bangles take it from meh to YAS. Heidi was at the Emmys representing Project Runway so you KNOW she was on the lookout for the best dressed.

Modern Family's Sarah Hyland wowed in an A-line printed cut out Zac Posen number. The fall leaf print makes us want to curl up with some cocoa and a warm blankie.

BAAAAAAARB! Stranger Things' favorite deceased homebody stunned in a custom Sachin and Babi emerald gown, adorned with black butterflies. This is exactly the kind of "extra" we are looking for in an Emmy ensemble. Check out the next page for more!

We will never be able to separate Jane Krakowski from Jenna Maroney in our minds, but that isn't necessarily a bad thing. This dramatic v-neck feels like something that Jenna would wear, but also perfectly suits Jane. Win win!

Rashida's remarkable acting can make us laugh, make us cry, and inspire us, and we think this stunning lavender number is the perfect accoutrement to her stunning acting chops.

Stranger Things' Millie Bobby Brown's Calvin Klein tea-length dress is the absolute definition of classic. She may not have one an Emmy tonight, but at only 13, we think she has a long and amazing career ahead of her!

Madeline is a chameleon. From her tattooed, cornrow wearing stint as Tricia Miller on Orange is The New Black to her turn as the repressed, one-eyed, pregnant handmaid on Handmaid's Tale, Madeline is certainly a jill of all trades. Tonight's Emmy look is no exception. She stunned in a glittery Berta getup that made her sparkle like a disco ball. But it didn't end there. Keep scrolling for more amazing celebrity looks...

Ellie plays an eternal optimist in Netflix's The Unbreakable Kimmy Schmidt so this dark, moody, sheer Judith Leiber dress feels like a departure for her. Safe to say we're loving it.

Queen of Our Hearts, Issa Rae, has never made a fashion faux pas. All she does is win win win, no matter what. That said, this custom Vera Wang gown in firey red feels like the perfect compliment to Issa'a megawatt smile and massive talent.

Also in Naeem Kahn, Laverne Cox looks like a metallic goddess tonight. Not only did she wear a custom gown, but she also co-designed a custom nail look with Orly! We're loving the whole look.

Elizabeth won best lead actress in a drama series tonight for her incredible work on Hulu's The Handmaid's Tale but she also won our hearts in the sweet, pink strapless number. It's classic, it's elegant, and it reminds us of Gwyneth's 1999 Ralph Lauren stunner in the best way.

Lena made Emmy history tonight as the first black woman to win for Comedy Writing for her 'Thanksgiving' episode of Netflix's Master of None! On top of that she wowed us in this stunning, ornate tuxedo. Click 'Next' for more!

This look is sending us to 7th Heaven.  The voluminous hair, architectural dress, and overall vibe are just giving us life. Justin Timberlake is one lucky man.

Kate took home the Outstanding Supporting Actress in a Comedy Series Emmy tonight for her amazing and hilarious work on NBC's SNL thanks to her portrayal of Hillary Clinton and so many other hysterical characters. On the fashion side, she kept it cool in this sleek black and white Narciso Rodriguez dress, Roberto Coin jewels, and Stuart Weitzman shoes.

Ariel's double slit, animal print, beaded Zuhair Murad gown has a lot going on, but if anyone can wear a dress like this, it's her. We love her confident strut, lustrous brunette locks and towering stilettos. That said, we still can't believe how grown up little Alex Dunphy is now (sobs quietly at the passing of time).

Chrissy's stunning custom lace Lela Rose emerald gown had delicate, incredible pearl embroidery on the neckline and hemline. The This Is Us star absolutely slayed her first Emmy red carpet and we can't wait to see what she comes back with next year.

And last but certainly not least, Priyanka Chopra rocked an ornate, extravagant silver and white Balmain dress replete with sparkle and fringed with oodles of white feathers. Is it a lot? Yes. It is marvelous? Also yes. Go on, Priyanka. Come through, girl.