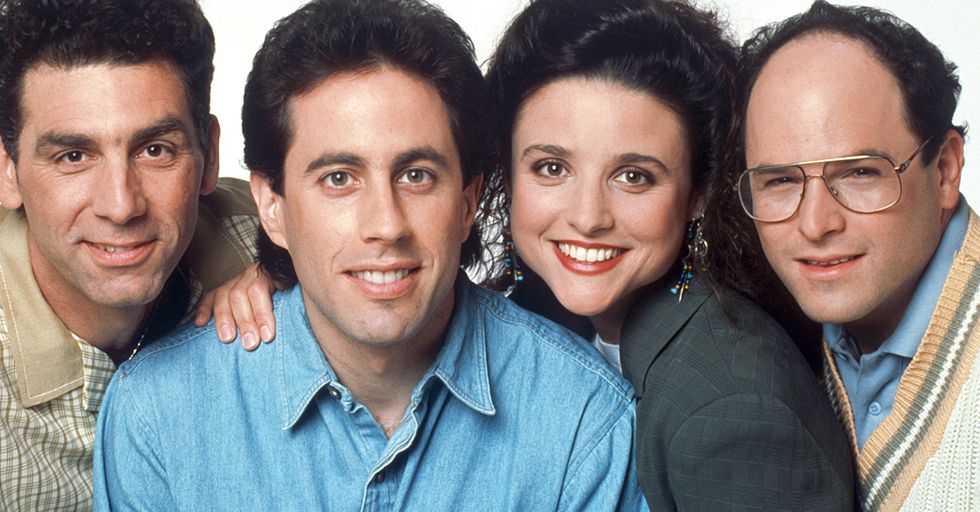 The 40 Best 'Seinfeld' Quotes of All Time

Seinfeld is perhaps the most classic sitcom of all time: a show about nothing that somehow became wildly popular. With a full 10 Emmys (plus 86 nominations), the show clearly has something going for it. If we were to guess, we'd say that its quotability is a significant factor.

After all, we're still quoting the show and it's 20+ years since it's been on the air. That's some serious staying power my friends. In honor of the high-quality quotes of Seinfeld, we've pulled 40 of our favorites (it was hard to narrow it down even that far). Let's spend some time with Jerry, Elaine, Kramer, and George. It's time for some major nostalgia that will leave you yearning for a time when those episodes were dropping weekly.

You may even find yourself getting some brilliant life advice in the process. Or maybe you'll just learn about nothing...after all that's what the show is about, isn't it?

In fact some of Seinfeld's most stand out moments were the kind of wisdom that only comes from utter stupidity. Kramer brilliance.

Sometimes being obvious is truly hilarious.

In fact sometimes Seinfeld was so obvious that it was boring.

And so boring that it turned back around into funny again. Magic! Or maybe just George.

But enough about the obvious...let's get into an area where Seinfeld truly shines. Dating.

Seinfeld dove deep into one of the most terrifying parts of dating: self-awareness. Please, no one inform me of how attractive I really am, I love my ignorant bliss.

I can talk for DAYS about how undateable they are.

Dating is super hard y'all.

Pro-tip: using a pick-up line about crop circles to a random woman in an elevator? Not the best method.

People aren't just awful when it comes to dating.

Seinfeld gave us a truly revolutionary premise: all people are awful.

One of us. One of us. But like...not really in a group or together because again, people are awful.

They're so bad that they can even silence Elaine.

And you know it's pretty tough to get Elaine to zip those lips.

Men are a particular kind of awful. See: manspreading.

Is manspreading even the worst thing men do?

No apparently that's what Elaine would call "diddling the maid" (so undignified).

Even when people are nice they're awful. Wrap your brain around that.

But just so you know, Elaine's got some choice words for those who aren't nice.

Sometimes a metaphor takes on a life of its own, takes a trip to the store, and picks up a few smokes. This metaphor is one of those metaphors.

Is anyone else getting some weird Snakes on a Plane vibes?

And WHY are people the worst?

SHEER INCOMPETENCE. I mean, among other reasons.

Small talk is also high on the list of "awful human" traits.

I swear that if anyone asks me "how's the weather" I will run straight out the door.

But usually it's just people.

But while Jerry prefers his misanthropy to be upfront...

George is more about hating people from a distance.

But George has never been what you'd call a bold guy.

Remember that time he was convinced he had lupus?

At least George knows his role in the world.

It's to be a quitter. To quit.

He's the kind of man who loves nothing more than dodging a phone call.

And listening to his own answering machine.

Except possibly for velvet.

He does have a luxurious side after all.

Plus he's SO easy to make fun of.

But hang on how did we get distracted by George?

This is about Jerry, right?

You can't fool us, you are definitely a pirate, and we will not rest until we hear you say "arrrr matey".

He seems to have a lot of clothing-related problems.

Like the time he tried to return a jacket "for spite".

But if there's one topic that Seinfeld truly loves, it's food.

If I could give the show a new tagline it would be "a show about food" instead of a show about nothing.

Holy moly Batman, the possibilities for comedy are endless.

Are you haunted by the Soup Nazi as I am?

Literally every time I eat soup, I simply imagine having it snatched from my very hands. Tragic.

And what happens when Jerry doesn't get his soup?

There are some Seinfeld lines that are absolutely iconic.

Fun fact: dingoes ate my baby was so popular that one band named themselves after it.

And there's NO way we could make this list without one reference:

FESTIVUS FOR THE REST OF US. I do spend most of my holidays wandering around yelling that at strangers.

Seinfeld really knows how to celebrate the holidays.

Don't you just love gathering together during a frosty winter day, grabbing some gum, and just being together with your friends? Classic.

We've kept his one-liners for the end because they're so flipping good.

It's time for some KRAMER my friends.

But seriously, if you're looking for someone to utterly destroy another human being in just a few sentences...

Look no further than Kramer. Such wit. Such candor.

Even when he's feeling overwhelmed...

He somehow manages to give us words of wisdom. Meditate with me: serenity now.

Honestly Kramer might be the only thing keeping us from falling into chaos.

He's got rules, he's got serenity, he's got that HAIR.

But sometimes Kramer is ok with breaking a couple of rules...

If it means he gets to be...the assman for a few days.

Not all the quotable quotes come from our leads.

Uncle Leo's dang eyebrows could basically be a character of their own, and that character would definitely have a "demeanor".

And how could we end this without the classic...

The "yada yada yada": a phrase that will haunt George for the rest of his life.