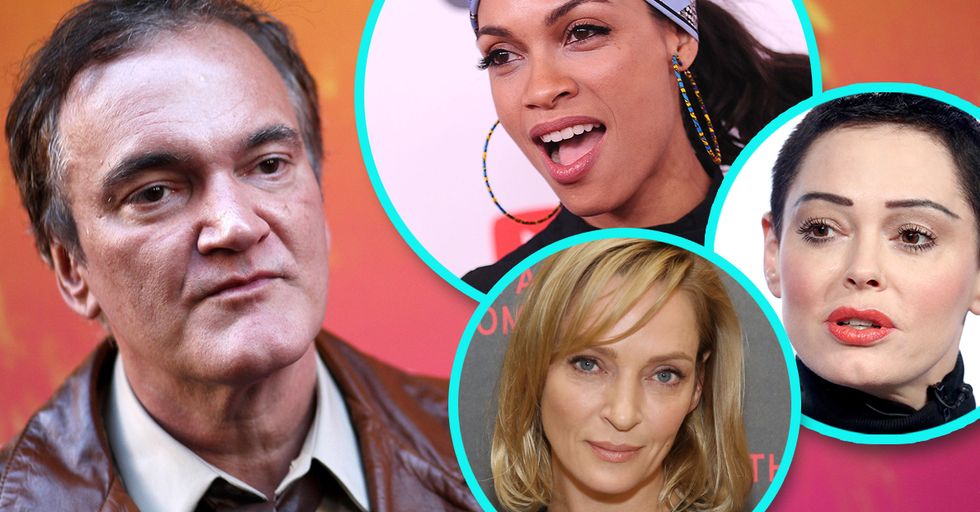 Tarantino movies are known to be bloody. That's the nature of the beast. There are always gruesome deaths and torture scenes, all liberally seasoned with the saltiest, filthiest curse words known to man.

And then, there's the women. Except, perhaps for Pam Grier as the exceptional Foxy Brown, women never fare well in Tarantino films.

Here are the worst things that happen to them by movie. Be forewarned, there are heavy spoilers.

Remember Reservoir Dogs? The first entry in the Tarantino oeuvre exploded across our consciousness like fireworks in the night.
The film, which exhibited all the gory violence and double-crossing that would become Tarantino's trademark, focused on a group of bank robbers who turn on each other after a bank robbery went wrong.

There's only one woman in the entire movie, and she doesn't even have a line before Mr. Orange shoots her as he attempts to carjack her. She manages to shoot him in the gut before she dies.

Pulp Fiction is one of Tarantino's most beloved and influential films and centers on a varied cast of characters, including two hitmen, a boxer, a gangster's wife, as well as a pair of diner bandits, all of whose stories intertwine in violent and criminal ways.

One of the most memorable characters in the film is Mia Wallace, wife of gangster Marsellus. Wallace is an assertive cocaine addict who snorts heroin mistaking it for cocaine and has to be revived with an adrenaline shot straight through the heart.

One of Tarantino's more obscure pieces, the 1970's blaxploitation style Jackie Brown centers on airline hostess Jackie Brown, who smuggles drugs from Mexico to make ends meet.
When she's caught by law enforcement, she engages in a desperate gambit to steal money and flee the country.

Brown fares surprisingly well in the film, but one of her accomplices, Melanie Ralston, does not. Melania is killed by her own boyfriend after making fun of him for his age and shaky memory.

The Kill Bill duology is full of death, murder and mayhem. Focusing on the Bride, a dangerous assassin who goes on a murderous rampage after she gets left for dead by her own team, Kill Bill spans multiple continents and countries, and raises the bloodiness factor for Tarantino movies.

One of the first scenes we see is the pregnant Kiddo in her wedding dress being shot by her lover, the titular Bill. From there, the horrors continue.
While Kiddo is in a coma, she's pimped out for rape by her hospital aide, Buck. When she goes out to seek revenge, she's shot in the chest with rock salt and buried alive in a coffin, which she then has to dig herself out of.
Maybe, instead of asking what bad things happen to Beatrix Kiddo in Kill Bill it would be easier to ask the question – what bad things don't happen to Beatrix Kiddo in Kill Bill.

Green is one of the deadly assassins responsible for Beatrix Kiddo's death, so she's one of the first people Kiddo comes after. Green is a cool and collected killer who has enough wherewithal to hide her knife when her daughter comes home from school. That doesn't stop Kiddo from killing her, though.
Even though she did deserve it, Green gets stabbed with a knife in front of her daughter. Rough...

Kill Bill - Gogo gets nails in her head

One of the standout characters to come from the Kill Bill series, Gogo is crime boss Oren-ishii's quiet and acerbic henchmen, who has talent for both the sword and meteor hammer.
Kiddo kills her by driving a broken chair leg studded with nails into her feet, and then driving nails into her head.

Another henchmen of Ishii's is Sofie Fatale, who gets her arm sliced off when she attempts to help her mistress.
Fatale's fate is unknown, but after a wound like that, the likelihood of survival is very low. Then again, there's always potential for a third Kill Bill movie.

Poor O-ren Ishii. Her parents were brutally murdered, and when she became an assassin, she had go up against a pedophile to avenge their deaths – and she was still only a child at the time.
As if all that's not bad enough, she gets confronted by a revenge-bent Beatrix Kiddo who not only massacres all her men, and her favored henchmen, but slices off her head with a Hattori Hanzō sword. Brutal.

It's very difficult to feel sorry for Elle Driver. She's a ruthless assassin who has no problem poisoning someone with lethal injection or black mamba.
So when her left eye is snatched out by Kiddo – the right already having been plucked by her kung fu master (who she then poisoned) – there's a sense of poetic justice.
Oh, and did we mention?  Kiddo leaves her locked in a trailer with an angry black mamba, so there's that too.

One of the most obscure Tarantino movies, Death Proof is an homage to grindhouse films, and follows a maniacal stuntman who murders young women using his "deathproof" stunt car.

Death Proof – Pam gets the ride of her life

When charming and affable "Stuntman" Mike offers her a ride in his car, little does Pam suspect that he's a psychopathic killer intent on ending her life.
He then proceeds to whirl his car around, causing Pam to roll around until her head smashes against the dashboard, killing her.
By this time, of course, Mike has told her that his car is death proof – but only if you're in the driver's seat.

To be more specific, he puts off his lights and rams into them. The accident rips one woman's leg out the window, sends another's body flying out the windshield, and – most gruesomely of all – rips a woman's forehead off via flying tire.
Tarantino, of course, replays the scene multiple times. From multiple angles.

Death Proof – Zoë is thrown from the hood of the car

Three women, Abernathy Ross, Kim Mathis and Zoë Bell are joy-riding, with Zoë on the hood holding belts fastened to the car.
When Mike T-Bones them, Zoë is thrown from the hood. She's okay, though, and she and her friends proceed to unleash unholy fury on their would-be murderer.

One of Tarantino's most popular films, Inglorious Basterds rewrites history to tell the story of a group of men who set out to kill Hitler during the height of WWII. Unsurprisingly, it's not a very gentle film to women.

One of the standouts of the film is German actress Bridget von Hammersmark, who is also a double-agent. When the film's villain, Hans Landa, discovers her duplicity, he strangles her.

Another of the film's primary heroines, Shosanna is shot to death by an angered suitor after she spurns his advances. This, of course, is years after Hans Landa has her entire family killed.

Django Unchained Broomhilda Von Shaft is punished for running away

Broomhilda Von Shaft, or Hildi, as she's known throughout the film, is Django's wife. Hildi is punished for attempting to run away with Django by being beaten, branded with an "R" and left in a hotbox without food or water.

After Django kills her brother, primary antagonist, Calvin Candie, Lara sends him to works in the mines. Django escapes and comes back to shoot her in the chest. Oh, and he sets Candyland on fire too.

The latest Tarantino film, The Hateful Eight is a slow-burn thriller which follows eight strangers forced to seek shelter from a blizzard in the same stagecoach stopover after the American Civil War ends. As with all Tarantino films, mayhem and bloodshed ensue.

Jennifer Jason Leigh stars as Daisy Domergue, a dangerous murderer and gang leader who is the primary antagonist of the film. Domergue is slapped, punched in the face, shot in the foot, then the belly and then ultimately hung from the neck till dead. Not a pretty way to go.