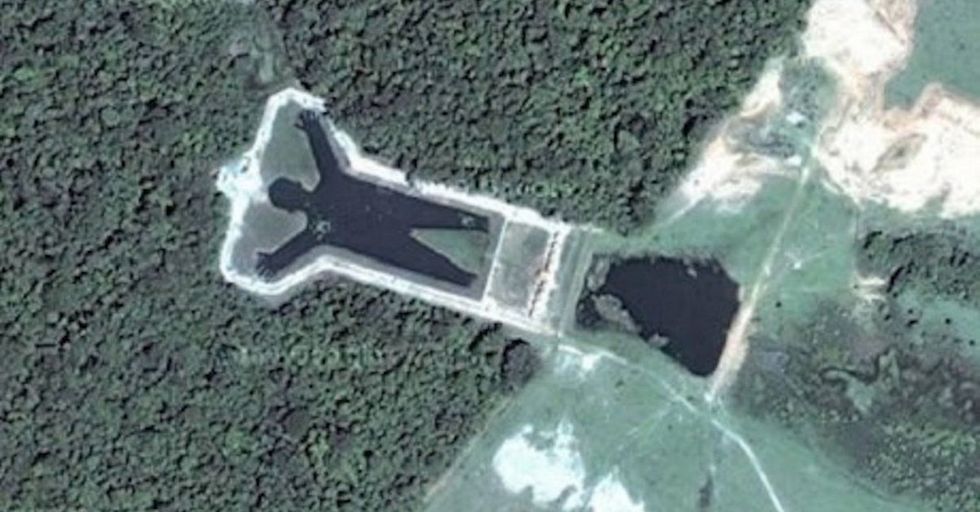 Click here to Start Free Trial Today
And sometimes when we see what’s been collected, we find some shocking stuff. Google has worked hard to give us bird’s eye views of much of the Earth, as well as street views, and in doing so, has caught more than a few moments that creep us out or, at the very least, make us scratch our heads. Take a look at the weirdest ones below.

We've gotten used to the fact that there's ALWAYS someone watching these days. Even when there's no one around, we've got companies like Google taking inventory of the world around us.

And sometimes when we see what's been collected, we find some shocking stuff. Google has worked hard to give us bird's eye views of much of the Earth, as well as street views, and in doing so, has caught more than a few moments that creep us out or, at the very least, make us scratch our heads. Take a look at the weirdest ones below.

There has to be a good explanation for this damning photo. Right? RIGHT?

This is a blood-red lake in Sadr City in Iraq. The weirdest part? No one knows why it's red.

This is apparently a Street View shot of a woman being kidnapped out of a building, about to be tossed in a trunk.

In 2016, near Deception Island off the coast of Antarctica, this photo was taken. It's admittedly very grainy, but it's not hard to see some sort of sea monster in the pic.

Ok, this one's more romantic than creepy, but we're still dying to know the outcome.

This is a natural landform in Alberta, Canada. It's really hard NOT to see a person's head and neck here.

Apparently, the land "naturally" formed into this image of a man riding a horse, but...what are the odds?

This lake outside of Sao Paolo, Brazil was intentionally built to look like a person, but that doesn't make it any less creepy.

This strange arrangement of rocks was captured in Cumberland County, Maine.

This is a guitar-shaped mansion, so I guess the creepy thing in this photo is the lack of taste.

In rural Georgia, outside of Atlanta, a devil head seems to appear out of the landscape.

Meanwhile, in Hungary, a likeness pretty similar to Jesus has appeared in a field.

Nobody knows what this was, captured over an Italian town. Nor does anyone know what caused it.

This has to be either a prank or an emergency landing...in Brooklyn.

That's a 200-foot-long knitted pink rabbit in a field in Piedmont, Italy. No big deal, right?

Just a gravity-defying Spider-Car, chillin' on a wall.

There's gotta be a good story behind this naked dude getting out of a trunk in Germany. Unfortunately, we don't know what it is. Fortunately, we've got good imaginations and can create our own story.

This is pretty clearly a missile test that was caught in Utah. Were we supposed to know about this?

Is that a lens flare from Google Street view or something a little more...interesting?

That's a crop circle in the Nevada desert. Maybe it's Burning Man-related?

Rectangles up to a mile long can be seen from space above the Gansu province of China.

This sure looks like a dead body, but the Internet solved the case several years ago and found out that it was a girl pranking her friends. And us.

Ah yes, just a giant pentagram in the grass. Nothing to see here.

OK Noth Sentinel Island is CRAZY. It's totally tree covered and it's home to the Sentinelese, an indigenous people that violently reject any attempts at communication or contact with the outside world. As such, the island and its inhabitants remain a total mystery.

Surely some glitch happened with the Google camera. Because this is not how human legs work. Flamingo legs, maybe, but not human legs.

It's hard to tell what exactly is going on here, but between the masks and the scary looks, I can say with certainty that I do not like it.

Are you seeing two of Grandma? Yeah, us too. Don't worry. It's just a trick of the camera. This isn't what the girls from The Shining

Not only is this a skull, but it seems to be a human skull. Kudos to Google on the spookiest photo maybe ever.

Oh wait, no. Spoke too soon. This is definitely more terrifying. What is going on here? You know what? Nevermind. I don't want to know.

At another angle, this giant bunny in Italy sort of looks like it's hanging from a noose, which is extra scary and weird.

While these are just mannequins, there's something totally eerie about the sheer number of them and the positions they're in.

Google caught poor Gumby getting pelted with a shoe! That's no fun, and these bully kids need to be taught a lesson.

This definitely looks like a plane crash, but someone said it's the set of Mythbusters, which is a plausible and also more desirable option.

This looks like the album cover of the saddest, loneliest indie musician in the world. Notice the arrow pointing to Hell.

Apparently, in Japan, there is a whole town of these old lady scarecrow figures just standing around and made to look like they're performing tasks. Spooky.

And here's the album cover of the second saddest, second loneliest indie musician in the world. Actually, though, this would make a great album cover.

This sure looks like a dead body near some train tracks with a police car and people checking it out nearby. Let's hope they were filming a movie or something...

This guy explored depressed parts of St. Louis, MO on Google Street View, and the snapshots he got are astonishing and sad.

Like this one, of an abandoned girl's bicycle outside of two boarded up houses. It's got a real rapture quality to it.

This isn't necessarily an abandoned part of town. People still live here. The neighborhoods are just that dangerous and depressed.

This looks like maybe it was a schoolhouse at one time. Now, it's just an abandoned building that looks like it's literally sinking into the ground.