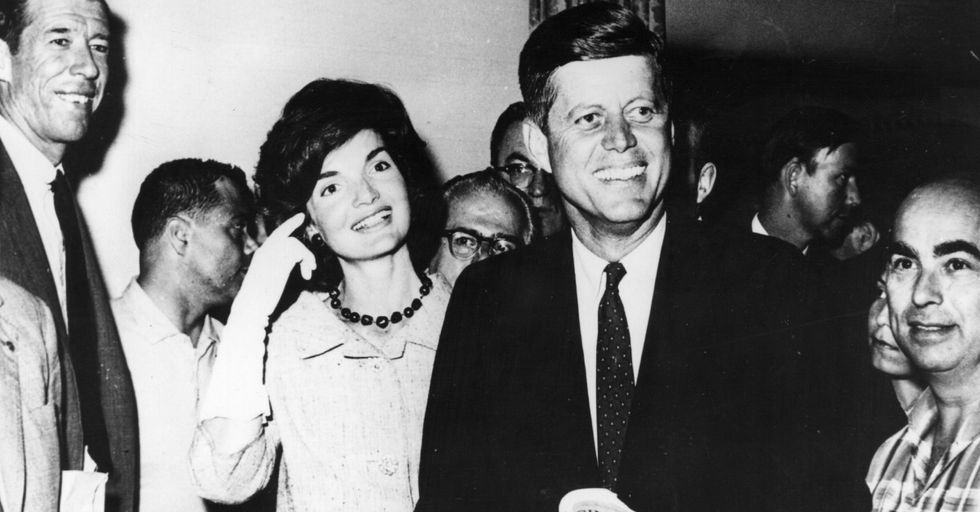 Approximately 2,800 files related to John F. Kennedy's assassination have been released to the public for the first time. If you want to download the files yourself, you can do so HERE.

But we're guessing you probably don't have time to read all 2,800 pages. That's why we went ahead and found the seven craziest details from the files. Grab your tinfoil hat and read on.

1. FBI director J. Edgar Hoover stressed the importance of getting the public to believe that Lee Harvey Oswald acted alone in the assassination.

In a memo penned on November 24, 1963 (the day Oswald was killed), Hoover voiced concern that people would think Oswald's murder would be seen as evidence that there were more people involved in JFK's death than one lone gunman. “The thing I am concerned about, and so is [Deputy Attorney General Nicholas] Katzenbach, is having something issued so that we can convince the public that Oswald is the real assassin," Hoover wrote. The next day, Katzenbach wrote a memo saying "the public must be satisfied that Oswald was the assassin; that he did not have confederates who are still at large; and that evidence was such that he would have been convicted at trial." Needless to say, people weren't 100 percent convinced back then... and many aren't now, either.

2. Oswald may have been a CIA agent.

That Oswald could have been a CIA agent has long been suspected by many conspiracy theorists. Interestingly enough, this memo from 1975 ends abruptly as soon as Oswald and the CIA are mentioned together. Kind of suspicious, right?

3. Robert F. Kennedy was warned about a book detailing his "close relationship" with Marilyn Monroe.

Apparently, RFK (who at that time was the U.S. attorney general) was sent a memo that warned him about the impending release of a book called The Strange Death of Marilyn Monroe. Before Monroe's death in 1962, she was rumored to have had affairs with both Kennedy brothers. Some have speculated that her relationships with the Kennedy brothers may have had a role in her death (although it was ultimately ruled a suicide). Also included in the files were fan letters from Lee Harvey Oswald to Marilyn Monroe. Could Oswald have held JFK responsible for his favorite movie stars death and taken drastic actions to make things right?

3. A British newspaper got an anonymous tip that something big was going down in America — 25 minutes before JFK's assassination.

25 minutes before JFK was shot, the Cambridge News received a phone call. The anonymous source on the other end of the line said, "Call the American Embassy in London for some big news…" So who called? And why did they call?

5. It doesn't seem like the USSR was involved (at least, not openly).

According to a memo titled "Reaction of Soviet and Communist Party Officials to JFK Assassination," it seems like Russia was actually pretty upset by the news of JFK's assassination. Church bells tolled for the loss. Soviet leaders also started panicking, worried about false retaliation from the U.S.

6. The KGB purportedly had evidence that Lyndon B. Johnson was at least partially responsible for JFK's assassination.

In that same memo, the following quote is found: "The KGB was in possession of data purporting to indicate President Johnson was responsible for the assassination of the late President John F. Kennedy." In another memo, it's revealed that Jack Ruby and Lee Harvey Oswald met up in Florida's Key West airport before the assassination. Apparently, Oswald approached Ruby and was overheard asking whether he'd heard anything from "the Big Bird." LBJ's wife was known as Ladybird Johnson... could "the Big Bird" have been LBJ himself?

6. The night before Oswald was killed by Jack Ruby, the FBI received a phone call saying that an attempt would be made on his life.

One document, written on November 24, 1963, says that an FBI field office in Dallas had received a phone call from a man "saying he was a member of a committee organized to kill Oswald."' The memo also states that Jack Ruby denied making the call.