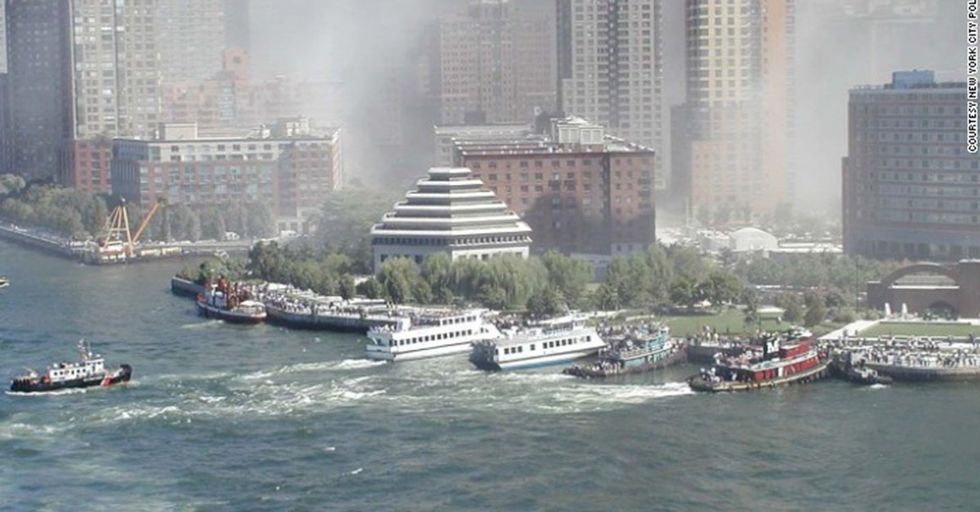 It's been 16 years since the tragic events of 9/11, but, remarkably, stories of courage and valor continue to surface as we learn more about the silent heroes who saved hundreds of lives that day.

This story that was a closely-kept secret — until now.

No American needs to be reminded of the tragic events of September 11th, 2001.

We're surrounded by the emotional, social, political and cultural ramifications of this tragic day almost every day.

With so much media coverage in the days, weeks, and months after the event, you may think you heard every story of courage there was to hear.

But one recent story proves there's still much about that day (and the days following) that haven't gone public.

This summer, Christopher Nolan's WWII film Dunkirk, was shared with audiences all over the world.

That harrowing tale focused on the real-life rescue of over 3oo,000 troops who were stuck between an encroaching Nazi army and the sea. With nowhere to run or turn, it looked like their lives, as well as the fate of the war, was in grave danger.

Remarkably, the mission, code-named Operation Dynamo, was a success, and thousands owe a debt of gratitude to the brave civilian sailors and rescuers who, with no military experience, put themselves in harm's way to save others.

It's a story of heroism, plain and simple. And it resonated with audiences worldwide, pulling in almost 500 million dollars, worldwide, as of this publication date.

That movie informed millions. But what many didn't know is that America has an eerily similar story. One that took place on September 11th, 2001.

The story is that of the incredible civilian-led rescue of the victims of 9/11 immediately following the collapse of the Twin Towers that fateful September morning. And you will definitely want to hear it...

When the World Trade Center collapsed, no officials had thought of a thorough evacuation plan to move Manhattan residents and workers out of harm's way.

The scope of such danger simply hadn't been imagined, but on September 11th, it became a terrifying reality.  No one knew if more attacks were imminent.

With no plan in place, boat owners in the area became part of an ad hoc, unplanned evacuation to move 500,000 people out of Lower Manhattan and to safety.

It started when just one boater, ferry captain Rick Thornton, learned of the events and threw his boat around to return to the embattled island of Manhattan. He did so without any direction or imperative. He did so because he knew people needed help.

With transportation shutdowns widespread, the lower end of the island was essentially paralyzed from the inside.

Boatswain Mate 3rd Class Carlos Perez watched the towers fall from the water, knowing there was nothing he could do to stop them. Speaking to CNN's Jessica DuLong, who wrote a moving feature on these waterway heroes, he offered,  "The worst feeling as a first-responder in any capacity is being on a scene of distress and not being able to do anything about it."

Fleeing citizens, unsure of what would come next, ran until they reached the water. They had nowhere left to go.

That is, until the not just Peterson's ship, but countless others pulled up in an effort to rescue the masses, covered in ash and terrified, from whatever fate may await. They numbered almost 500,000, making this one of the biggest rescue missions in modern history. Said NYPD Officer Tyrone Powell, "We had like Noah's Ark. We had everybody on that boat. We had animals. We had babies without parents. Everybody was covered in soot." We've seen this sort of heroism more recently as well in the rescue efforts for hurricane victims in Houston.

The story is often condensed to the facts and figures, when truly, it's so much more than that.

So much more occurred to make it possible for civilians to get to safety, as you'll see. Awareness of this is still low when it comes to this Herculean act of heroism by countless boaters, but hopefully, the world will soon recognize their sacrifice. This effort is being led by actor, Tom Hanks, as seen in the video on the next page...

This ten-minute documentary narrated by Hanks reveals the people, too countless to name and credit here, who were behind this rescue.

In the madness of that day and the ones following, this story hasn't been given its due.

Until now. It seems that 2017 is the year that this story comes to light for millions who were previously unaware.

The heroes behind the rescue didn't seek fame, but may now get credit for their brave actions. Not only did they pull their vessels up to the doorstep of danger, unaware if they or their boats would be targeted, but they also often threw themselves into the water to rescue panicked survivors who fell into the water in the rush to board.

The responders were military, law enforcement, and private boat owners who saw an opportunity to help.

The heroism transcends the jobs these people had and speaks only to their actions in the face of danger and distress.

Unlike in the Battle of Dunkirk, luckily, no further attacks were made on New York City after the Twin Towers fell.

But that doesn't mean that it was any less heroic or impressive on such a grand scale. Hopefully, this story will remind us that heroism can exist right under our noses without movies or films to commemorate it. We just need to remember where to look and be aware that it's around us in our American brethren, regardless of whether they're wearing uniforms.

What perhaps even more important than the credit to the heroes is the precedent they set.

As we see in Houston, private boatowners are saving people under the winking name the "Cajun Navy."  We're constantly reminded by those images, and now this story of a great Manhattan boat rescue, that people can make a difference and, for the most part, are eager to put themselves at risk to help others. That's a story worth remembering 16 years after the Towers fell.