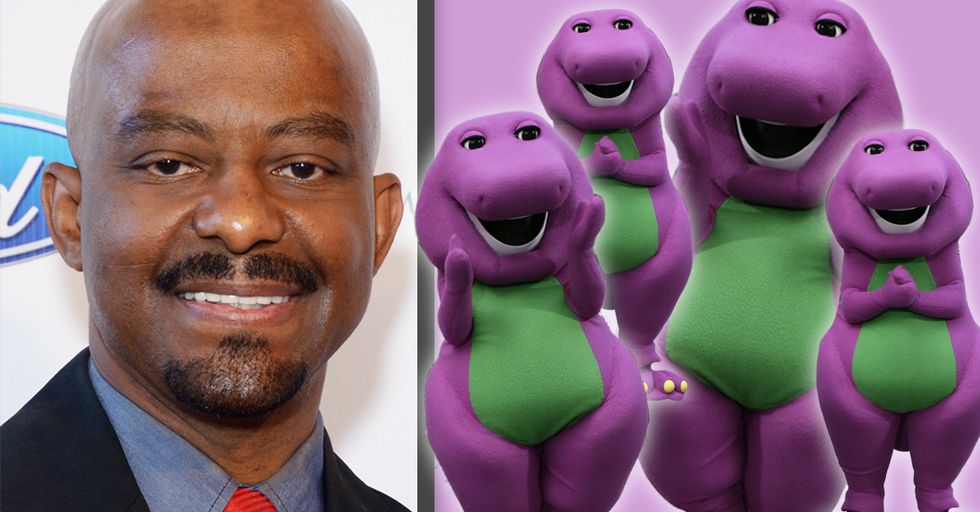 Do you remember Barney?

For most of the nineties and early aughts, he was the dinosaur from "our imagination," that led children on imaginary but educational excursions that ended with the proclamation, "I love you."

I, for one, hated Barney. He was a weird-looking purple Tyrannosaurus Rex, and I always thought his voice rode the cusp between weird and just plain creepy.
As you can guess, I was one of "those" children. You know, the obstinate ones that hate everything just for the sake of hating it. If they'd made a show about fairies that magically reached out the TV and gave you ice cream – three scoops – I'd hate it too.
Despite all my obstinacy, however, Barney marked a magical period in my life. It was that hazy time when everything seemed much less stressful than it is now, and there was always the hope of a Happy Meal complete with toy around the corner.
It was the same for many other children, particularly those that came of age in the 90's. For them, Barney was the symbol of childhood, and he was played by actor David Joyner, who donned the suit from 1991 to 2001. (Barney's voice was mostly provided by actor Bob West, however.)

Before Joyner donned the 70-pound purple suit – which, by the way, could reach 120 degrees inside during the long filming hours – he worked as a software Analyst. He also had a very interesting side hobby – tantra...
In fact, Joyner explained to Vice, tantra had a lot in common with being Barney.

The energy I brought up [while] in the costume is based on the foundation of tantra, which is love. Everything stems, grows, and evolves from love. Even when you have emotionally blocked energy, the best way to remove it is to remove it with love, and then replace it with God’s divine love. Love heals and allows you to continue to grow.

Now that his time with Barney is over, Joyner has gone back to his first love. And he's taking clients. Joyner is now working as a tantric practitioner and massage artist, and he has 30 clients, or goddesses, as he calls them.

He started the business in 2004, and it spread via word of mouth, or through his recruiting on Tinder. Joyner typically charges $350 a session, and he has two to four clients a week.
He also now says things like this:

When you go down on a woman (orally), it should be just like you’re saying grace, like blessing the food you’re about to receive. No food in the world can compare to goddess nectar because spirit is involved. Before you taste the goddess nectar, give thanks. Say grace. I would love women to understand how powerful that energy is.

And he sometimes has unprotected sex with his clients because condoms "block energy."
Other tantric practitioners like Kaya Kwan Yin say that this claim is patently ridiculous, and even shady –

Tantric sex can happen with your clothes on. What typically looks like penis and vagina penetration is often referred to as 'full union' in contemporary practice. Sexual energy penetrates clothes, condoms, countries, and beyond. Having sex with clients in the world of tantra is more of an anomaly than the norm.

Joyner's clients, however, have nothing but praise for his efforts. In fact, his website has several goddess testimonials. Also, none of the clients interviewed say they felt pressured or coerced in any way, and Joyner has no record of coercion or any other sex-related crimes with the police.
Stephen White, head writer of the Barney franchise from 1992 to 2005 says that while he was surprised to find out about Joyner's tantric inclinations, it makes sense.

I did know David was a very spiritual guy, very positive guy—he radiated energy. He was a positive person to be around... I thought it was an interesting transition for Barney. It’s kind of still the ‘I love you, you love me’ deal, but different. I don’t judge or anything, but that’s a side of David I didn’t know.

Leah Montes (nee Gloria), who played Luci from age 9 to 15 on Barney & Friends agrees. "David was eccentric and wonderful and into things that I wouldn’t have been privy to given my age at the time," she says. "He was a normal, funny, really energetic, and happy guy."
That's all good and well, but I have questions. First of all – what the hell?! Secondly, how little did the corporate goons at PBS pay Joyner that he now has to take a day job as a sex worker? Okay, I need some time to process this. And wash my mind with bleach. Excuse me while I go and question every ever-loving thing from my childhood.