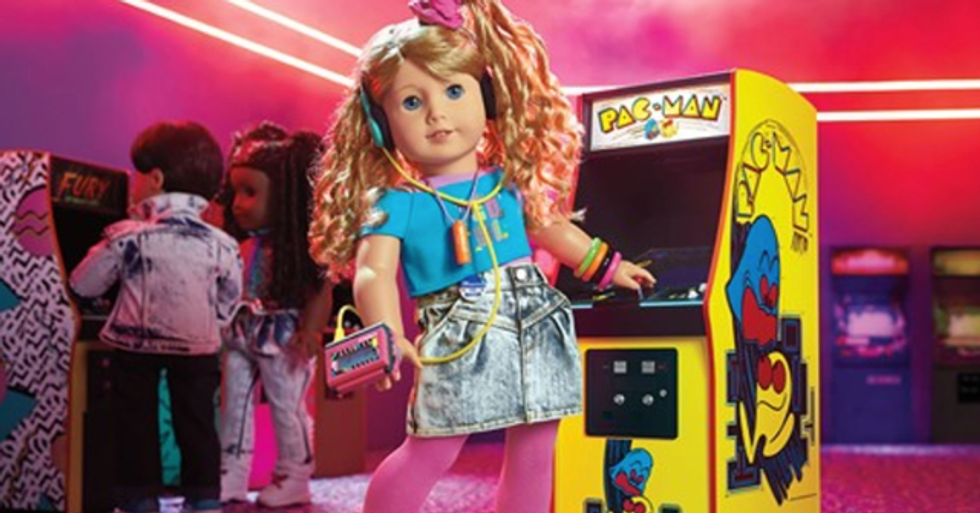 Oh, the good old days. You'd rush home from school to make sure your Tamagotchi was fed, the most important part of your day. You would frantically try to find batteries around your house so your Furby could still make those weird noises. Your American Girl doll was your BFF and she never left your side. You two were inseparable.

Those dolls were really such a treasure for anyone who owned one. But the latest American Girl Doll has the internet experiencing some ... mixed feelings.

In 1986, the first American Girl doll was released, made by a company called Pleasant Rowland.

Your own mini me!

Years after the original dolls were released, the company decided to embrace the unique qualities of each customer by offering customization. They wanted each girl to find a doll that they looked like.

People would wait in line for hours to get inside an American Girl doll store. It was serious dedication.

People were huge fans of the dolls because their uniqueness in style individuality. Plus, it was so cute if you got a doll that looked like you, so you guys could match your outfits.

Even Conan loves them!

Conan O'Brien visited an American Girl doll store where he created his own doll. It's a hilarious video where he gets a behind the scenes look of the doll. Basically, it's hard not to love these dolls.

Each doll came with its own book as well. The story revolved around the doll and her perspective, including talking about where they came from and what kind of adventures they lived through. It was a cute and creative way to make the dolls seem more real. They wanted to create "Strong Characters, Powerful Stories" as their website proudly states.

Some of the books covered serious issues like bullying or moving to a new city and making new friends. The stories created a detailed background for the dolls that hopefully kids could connect to.

As you can tell, the dolls grew to have hundreds of more options in regards to skin tones, outfits, and hairstyles. They also embraced different lifestyles for the dolls, showing some being scientists or astronauts. They even made dolls that were in wheelchairs.

No girl left out!

Was shopping for my god daughter and realized how AMAZING american girl is for advertising that disabilities/diseas… https://t.co/cs3Orgth5g
— Ava (@Ava)1542245736.0

American Girl really nailed inclusion and diversity for the dolls, showing that every girl deserves to have a doll that looks just like them, no matter what you look like.

Basically, these dolls were amazing and lovable for many reasons.

Well, it has some people feeling conflicted.

This is the new '80s American Girl Doll.

"As well as larger cultural shifts around blended families and emerging technology."

"She's an avid gamer growing up with her blended family in the fictional town of Orange Valley, CA."

"Courtney loves going to the mall, especially the arcade, where she’s one of the top-scoring PAC-MAN™ players."

"But Courtney doesn’t only play video games, she’d like to create them and bring more girl characters to the forefront."

American Girl is partnering with Girls Who Code for Courtney's launch.

It's "a leading nonprofit that’s on a mission to close the gender gap in technology and change the image of what a computer programmer looks like and does."

American Girl is "matching customer donations dollar for dollar up to a maximum of $50,000 to support the organization’s programming and outreach to girls, including those from historically underrepresented minority groups."

Want a Courtney of your own?