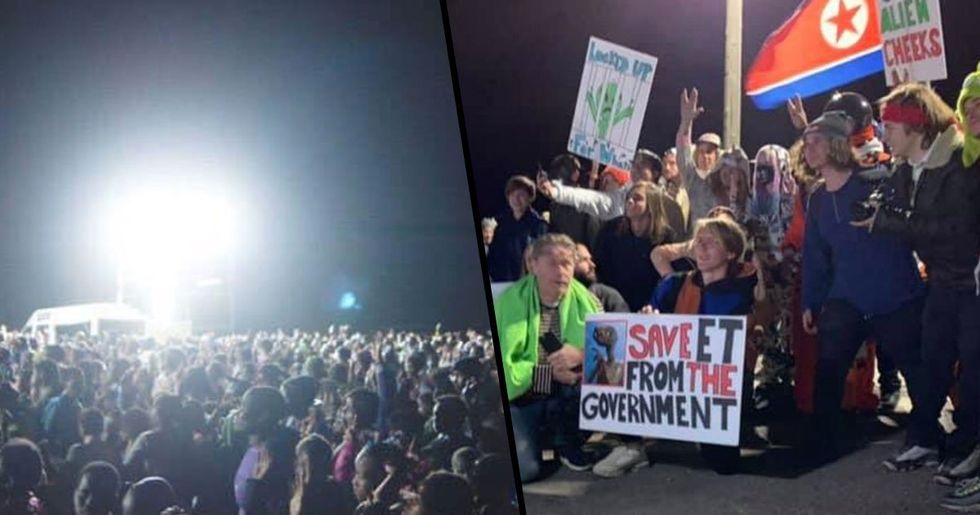 The Area 51 Raid Is Actually Happening

Alien enthusiasts all across the world have been excitedly plotting to break into the secretive compound for the last couple of months after a Facebook page dedicated to the raid was set up. And, like most viral sensations, things got way out of hand, with over 2 million people pledging to raid the military facility.

And today is the day.

Keep scrolling to see the first photos from the raid, which is happening right this very moment...

Area 51 has had a lot more attention than usual this year.

But what exactly is Area 51?

But now, more people are attempting to access the facility than ever before.

Clearly bored of discussing alien conspiracy theories over the internet in their basements, a group of extraterrestrial enthusiasts formulated an actual, real-life plan to find out the truth once and for all.

The other members were quick to share their military expertise.

One member wrote: "Get the aliens on your side and you might have a chance with some “inside support" like sabotaging the guns," while another commented, "We use the rock throwers and naruto runners to distract them and the rest of us go underground."

Ha! At the end of his post in the Facebook group, Jackson wrote: "P.S. Hello US government, this is a joke, and I do not actually intend to go ahead with this plan. I just thought it would be funny and get me some thumbsy uppies on the internet. I'm not responsible if people decide to actually storm area 51."

This is not a joke to some, as news is spreading that some people are actually planning on going ahead with the alien hunt!

I mean, if I was planning on going ahead with such an outrageous plan, I would at least try to keep the whole thing a secret just in case the government or the army found out, wouldn't you?

Because that's exactly what happened. The army found out.

Laura McAndrews, Air Force spokesperson, has released a warning to all of those involved in the plan. "[Area 51] is an open training range for the US Air Force, and we would discourage anyone from trying to come into the area where we train American armed forces," she warned.

"The US Air Force always stands ready to protect America and its assets." I honestly don't understand how people think that they could actually get away with something like this. It was all good and well when it was a joke, but, obviously, there are some people that just have to take it further.

Nobody knows what's going to happen...

Let's see how these "alien enthusiasts" get past the motion-sensor cameras, let alone the U.S. military, who are constantly patrolling the area.

But now, the raid has begun.

Everybody STAY CLAM. This is really happening.

Pictures are beginning to flood in...

And, quite evidently, crowds and crowds of people are arriving at the compound.

The crowds of alien enthusiasts can be seen gathering outside of the compound...

And military helicopters are circling, ready to defend the facility.

And they've even brought homemade banners, flags, and posters with them.

Though there are some, ahem, interesting creations...

I have no words for this one.

Yet, despite the crowds...

The military are clearly not budging, and have been pictured standing guard at the entrance.

We may have to wait a bit longer to see them aliens.

But make sure you watch this space for more Area 51 updates!