The Bachelor's Krystal Is This Season's Villain, but Bibiana Is the Prophet | 22 Words 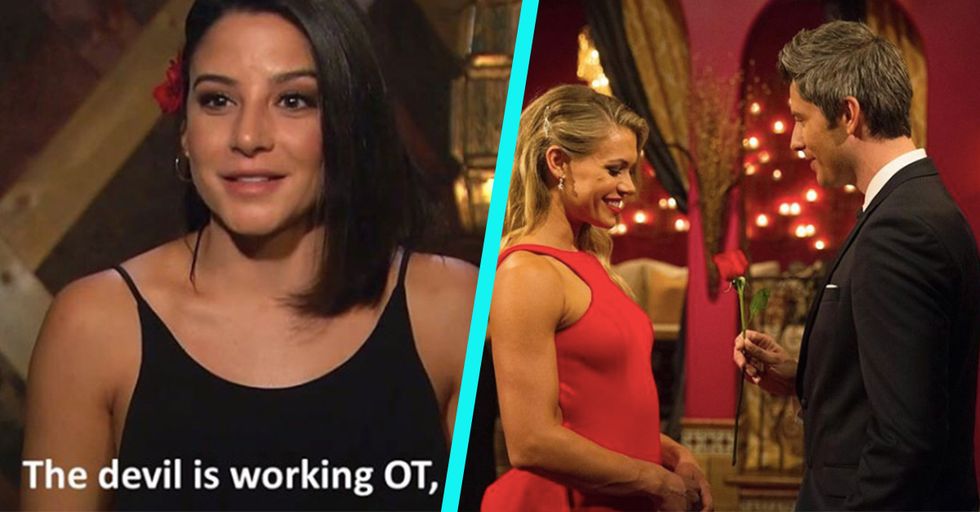 The Bachelor's Krystal Is This Season's Villain, but Bibiana Is the Prophet

Bibiana Julian is a modern day prophet, and we don't deserve her. In Arie's Bachelor world, you are either a Krystal or a Bibiana - there is no middle ground. And though it's been a mere three weeks of welcoming her into my life, I will be #TeamBibs all the way to the end. First loves never die. (Bibiana, will you accept this friendship rose?)

Although she wasn't given a rose this week, Bibiana's wise words will forever bloom in our hearts: "Please God, let one of those women get bitten by a puppy." I mean, the poetry practically writes itself!

Here's why Bibiana called out the devil's handiwork on The Bachelor before anyone else.

Bibiana is a girls' girl.

She calls on the Lord to cut a b*tch if the occasion arises. Over cocktails, of course. And group prayer, poolside.

Nope. She valiantly strapped some sort of dinosaur head on her skull and start body slamming people! Like a girl boss. Even after some old GLOW hag made fun of her name! Pssshhhhht. Plus, Bibiana's not afraid to cry in private over legitimately hurt feelings without running to a man for comfort afterward. (We see you, Tia.)

The devil wears many faces, or in Bekah's case, many braless ensembles.

Although Bibiana had Bekah's number from the start, she chose not to scatter her energy. Krystal was the main threat, so Bibiana conserved her power to laser focus on the beating black heart of the cast. It didn't win her any points with Arie in the end, but hey - she's back on the market to date men who don't have 17 other girlfriends now!

Meanwhile, Krystal complained to anyone who would listen about how "girls never liked me! For NO reason!!"

This is what Oprah might call an A-Ha moment. When Krystal says that women don't cotton to her, she's basically telling us everything we need to know - i.e: She's been stealing your boyfriend since the third grade. And she will use these well practiced skills this season to divide and conquer.

Now, I'm a dog person. Truly - I am! But this second Bachelor group date is basically everyone's version of Hell.

The "Best In Show" concept looks cute on paper, and I'm sure ABC execs were laughing uproariously about their bright idea to get the women in costume to prance around with unruly canines. But it was an epic fail. Arie was bored. We were bored. The dogs were bored. The kids looked vaguely pukey. It was essentially a hot mess. In other words, Hell.

Even Chris Harrison couldn't save the day by trotting out his best one liners on stage.

The only saving grace was Annaleise's tragic tale of woe involving a dog bite that nearly-took-her-eye-but-didn't. (???) So she had to poop-scoop as penance! Special shout out to the REELZ reenactment of a baby facing off with a terrier though, because that sh*t was very Twin Peaks. So, it wasn't a total loss! #SatanLovesConfusion

In the end, Bibiana tried one last Hail Mary move, but her efforts were in vain.

When she set up a sweet outdoor area to lounge on with Arie, sh*t went left almost immediately. Arie kissed about a billion other girls atop Bibiana's carefully prepared daybed, and despite her attempt to bust in on the action, her butt never even got to sit down on it. Savage.

But inside, The Dark Krystal was holding court with her minions!

Krystal practically giggled with evil glee as she passively aggressively told the group she "really, really hoped they got lots of quality time with Arie" like she did. As the women gazed upon the garbage person before them, they felt in their bones that her power grew stronger with every sip of boxed wine she drank.

Ah, but Krystal's ballsy maneuvering has nothing on the silent killah: Nanny's Who Neck.

Nefarious plans are being laid by Bekah at every turn, mostly by her straddling Arie and making out with him as if he's leaving for war instead of more face powder. She is coming in hot and heavy - and grossly underage. All of which Arie seems to be eating up. "“You’re so risky for me, I love it," Arie tells Bekah, taking another bite of her forbidden fruit. Bibiana might have missed her mark by letting this one off the hook so easily before she bit the dust.

No matter, though. Because it's Bibiana who is living her best life now that she's free!

"The struggle is real," she sighed just before learning she wasn't getting that coveted rose after all. Also let go this week: Lauren S (after her tragic word vomiting on her one-on-one date with Arie) and Annaleise, who Arie confessed just wasn't a match for him. Or for dogs of any breed, apparently. Now, we wait and gather our strength for next week's war of the roses. Bibiana, we thank you for your service.