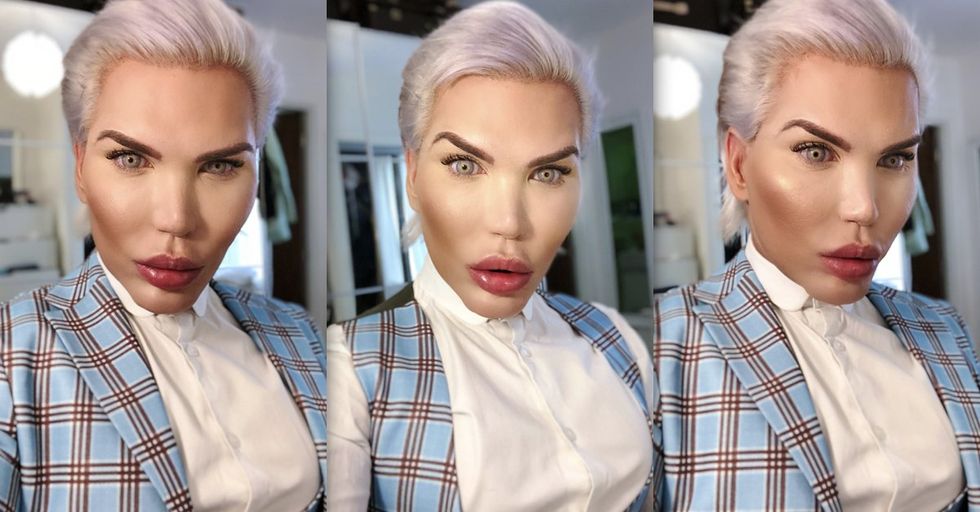 Ukrainian model Valeria Lukyanova has spent a small fortune — nearly $1 million as of 2013 — to turn herself into a real-life Barbie Woman. And at least in terms of exposure, the investment seems to have paid off. She has more than one million followers on her official Facebook page. She’s been covered by some of the top media outlets in the world, including GQ and In Style. She’s built an entire career — albums and books included — around being the woman who looks like Barbie. By most accounts, her transformation could be deemed a success.

But for every Barbie woman success story, there’s one that didn’t turn out as planned. In a video titled “I Nearly Died to Look Like Barbie,” Amanda Ahola recounts the breast augmentation surgery that nearly killed her. In an attempt to enhance her breasts to size 30GG, she suffered a seizure and swelling in her brain, all while under the knife. The brush with death didn't stop her, though. As of 2017, Ahola was still committed to achieving her dream “Barbie Woman” look.

Hollywood has built a lucrative business around shows dedicated to fixing plastic surgery mistakes, like the E! Network show Botched. The success stories, the failures, and the outlandish.

Plastic surgery disasters are nothing new.

The world is fascinated by talking about other people’s plastic surgery, and how they went wrong.

We typically recognize these disasters most among high profile celebs, like the ones in this article.

Take a look at just some of the media mainstays whose names have become synonymous with plastic surgery.

Every Barbie girl needs a Ken doll, and the most famous man who has attempted to achieve this look is Rodrigo Alves. Dubbed the “Human Ken Doll" by the media, the 35-year-old, Brazilian-born TV personality claims to have undergone more than 100 cosmetic procedures in order to achieve his Ken-like look. He even claims to have had four ribs removed so that his blazers have a more tailored appearance.

"My blazers have to be altered," Alves told Cosmopolitan in 2018. “I had to always have a bigger blazer and get it altered. I had four ribs removed so that I can do-up my blazers without having to breathe in or have them altered. I have a 20-inch waist now. It can be a dangerous procedure, absolutely."

Alves isn't the only man to achieve some level of fame for his "human Ken doll" appearance.

Justin Jedlica has also built a name for himself as a real-life doll. He claims to have undergone more than 300 cosmetic procedures and was even advised by the doctors on Botched not to undergo a risky procedure that would strip down his forehead veins.

He didn’t seem care, and in 2015, he went ahead with the procedure anyway.

Joan Rivers was known as a pioneer for women in comedy — and one of the hardest working women in the business, at that. But in her later years, she became just as famous for the work she’d had done to her face. Unlike so many in the spotlight, Rivers never denied the work she’d had done. In fact, she bragged about it, even making it a central part of her comedy routines.

“I wish I had a twin so I could know what I'd look like without plastic surgery," the comedian said in one routine.

"I've had so much plastic surgery that when I die they will donate my body to Tupperware," she joked in another.

Even though the comedian was open about her appearance, false rumors of a surgery-gone-wrong surrounded her death.

Despite rumors that Rivers died of complications while undergoing plastic surgery, the comedian was actually having a routine medical procedure to evaluate changes to her voice and stomach reflux. She was 81 years old.

If Valeria Lukyanova is known as the real-life Barbie woman, then Jocelyn Wildenstein has become famous as the real-life Catwoman. The billionaire socialite has been nicknamed "Catwoman", "The Lion Queen" and "The Bride Of Wildenstein" by various media outlets. She’s rumored to have spent upwards of $4 million on her cosmetic procedures.

“She feels beautiful," a source told Australian Woman’s Weekly. “She looks in the mirror and she loves what she sees. She got exactly what she wanted."

All those surgeries can be quite costly.

In 2018, nearly 20 years after divorcing her late billionaire, art-dealing husband Alec Wildenstein, Jocelyn declared bankruptcy. She claimed to be getting by on just $900 a month in Social Security income. Could her extravagant plastic surgery budget have played a role in her financial troubles?

Comedian Carrot Top (real name, Scott Thompson) has a residency at The Luxor in Las Vegas and has appeared on almost every television talk show known to man. He attributes the nickname to his bright red curly hair, but in recent years, it’s his overly altered appearance that has garnered the most headlines.

But the comedian denies having had plastic surgery.

On an episode of Oprah’s Where Are They Now, Carrot Top denied having surgery to alter his appearance, claiming: “People think I’ve had plastic surgery — no, it just takes a lot of makeup to make me look good."

He’s a regular fixture on the Internet, within “plastic surgery disaster" listicles and a YouTube video chronicling his “before and after" appearance. They show quite the drastic change over the years.

She was apart of Hollywood’s A-list. At some point her work on-screen started to take a back seat to the plastic surgery she was having done, and by 2014, she’d stopped acting altogether.

She remains tight-lipped about having altered her appearance but is open to acting again.

Dubbed “unrecognizable" by tabloids, the actress gave her first interview in years, in 2017 in response to the #MeToo movement. While she didn’t specifically discuss the alterations to her appearance, she did seem to suggest that if the right role came along, she’d be open to returning to acting.

“I love a call sheet. I go where a good call sheet takes me."

For every celebrity who shies away from discussing their plastic surgery — there's Cher, who seems to love the attention her altered appearance gets.

Yes, I have had a facelift, but who hasn’t?" she said bluntly in an interview last month.

There's more to Cher's look than just a nip and tuck.

But the ever-youthful actor-singer — who is as well loved for her iconic costumes and wigs as she is for her body of work — doesn’t just credit going under the knife with her appearance. The main reason she stays so young, she claims, is how she eats.

Much like Cher, Dolly Parton is also one to speak out about getting some work done. In fact, joking about her surgical enhancements are a regular part of her schtick.

She keeps it real with her audience.

The original Barbie woman regularly says she patterned her look after “the town tramp" and compares herself to a drag queen, even going so far as to welcome her plastic surgeon to the audience at concerts. But, when audience members accused her of lip-syncing at a concert? Well, that’s one thing that Parton would NEVER fake.

“My boobs are fake, my hair’s fake but what is real is my voice and my heart," the singer told The Sun.

As one of the biggest stars of the 80’s and 90’s, with hits including When Harry Met Sally, Sleepless in Seattle and You’ve Got Mail, there was a time when Meg Ryan was one of the most in-demand actresses in Hollywood. And then suddenly, at the height of her fame, Ryan started messing with her face. The rest, as they say, is Hollywood history.

She discussed her step away from acting with Gwyneth Paltrow.

Earlier this year, at an event for Gwyneth Paltrow’s “In Goop Health" summit, Ryan said that it was her decision to step away from Hollywood, saying: "I didn't really aim to be an actor. I was a journalism major at school, and a curious person and I wanted to go back out into the world and figure out who I was — am — in relation to other things and other people and other environments."

But, the timeline makes sense with her procedures.

The timing of Ryan’s abrupt break from the spotlight almost directly matches up with the first work she had done to her face. Her appearance in movies like, In the Cut, Against the Ropes and The Women — films she made after a bit of a break from the big screen — all remarked on how different she looked. But as many articles have also noted, focusing all of the attention on Meg Ryan’s face versus Meg Ryan the person is one of the main things wrong with Hollywood today.

This magazine set the record straight.

As Cosmopolitan summarized quite succinctly in 2016: “So why TF are we still talking about Meg Ryan's face? People age. Some choose to alter their appearance as they age. Some don't. The thing is, if you're a public woman going through that whole aging thing, you have to deal with your appearance routinely getting torn apart online. And when enough people tear apart your appearance on social media, it becomes news…"