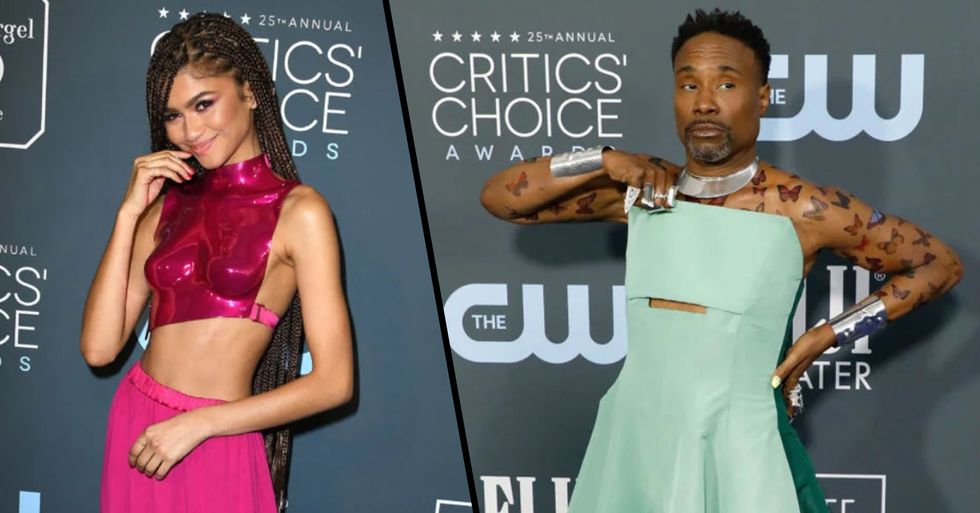 The Best and Worst Dressed Celebs At The Critics' Choice Awards

Another awards ceremony means another red carpet - and that means some incredible (and incredibly badly) dressed celebrities. Last night's Critics' Choice Awards gave us some triumphs (Jenny Slate's Mulberry gown is a thing of beauty - plus, Jennifer Lopez's redemption) and some unmitigated disasters (as much as we love her, Beanie Feldstein's get-up was pretty unforgivable). Curious about the best and worst dressed celebs at the 2020 Critics' Choice Awards? Keep on scrolling for all the details.

Props for going for a bold color - and this clementine shade looks amazing on her!

Just about on the "fashion" side of grandma's curtains.

He can really do no wrong, but this two-tone green geometric gown is perfection - and don't even get us started on his fingernails!

We know we shouldn't like this tutu-esque ensemble - but we do!

A midi-length baggy coral gown with a deep v neckline is the very definition of so wrong it's right.

This dramatic chartreuse satin jumpsuit ensured all eyes were on her.

Loving the '60s inspired pale pink shift dress - though we could do without that OTT train.

Sure, it's not groundbreaking - but we're into it!

Looking every inch the angel she is.

She always kills it on the red carpet, and this sunshine-colored drapey gown is no exception.

This is how to do simple and effective - so take note!

The LBD taken to a whole new level.

A lot of fabric - but still surprisingly elegant.

The voluminous and luxurious red dress is on our wishlist. Bonus points for pairing it with purple boots.

Sunny orange shades are clearly having a fashion moment.

Props for thinking outside the box and going for a rose-toned tux.

We love the demure neckline in contrast to those uber-high leg slits.

Ok, it's hardly groundbreaking - but it's a gorgeous dress nonetheless.

Sure, the dress kind of looks like a wedding cake - but that doesn't stop us loving it!

The fishtail shape combined with the inky blue color makes for a really interesting twist on a classic gown.

This nude illusion is just irresistible.

Anyone who opts for flats over heels is immediately in our good books.

She can do no wrong in our eyes - and this white embellished shift proves it.

This gorgeous origami-style dress has a beautifully sheeny finish.

We never would have guessed an avocado-colored cut-out dress would make our best-dressed list, but here we are.

Not only is this dress stunning, but she absolutely worked the red carpet, twirling to her heart's content.

Graphic lines and serious sparkles are what the red carpet was made for.

To add to the incredible-ness, she also had a baby about five minutes ago.

Proving that an LBD doesn't have to be boring.

Sure, it's a little bit prom - but that's what makes it fun!

This printed Mulberry gown might be our favorite look from the evening. The matching eyeshadow takes it to the next level.

On paper, a full leather body-con dress sounds like a disaster. In reality, though, she pulls it off!

Erring just on the right side of "Christmas ornament."

The most gorgeous goth on the red carpet.

Love the sparkly rainbow dress - but it's the comic book print shoes that make the look.

After a shaky start to the awards season, she's found her feet in this beautifully understated cream silk look. And now we've seen the best, let's take a look at the ... rest.

Sorry, but this looks fresh from the Forever 21 sale rack.

Why (God, why?) did she feel the need to add that stupid little jacket?

Not to be that person, but this dress doesn't fit, right? Particularly unforgivable for a costume designer!

From the off-the-shoulder sequins to the cylindrical white skirt, this is just bad.

This just looks really dated to us.

Not loving the low neckline combined with the eye-skimming fringe.

She kind of looks like a chess piece to us.

While Wanda looks more like a kid's magician, right?

This is a prime example of when a nude-illusion goes wrong.

Sorry, but this level of shine just looks cheap.

Sometimes a red carpet look just leaves us baffled. This is one of those times.

We love a print - but this one is just a little too curtain-y for our tastes.

Imagine getting invited to a big, fancy awards ceremony, then choosing to wear this.

Rocking up to a red carpet wrapped in a blanket is something we respect in theory, but can't condone in practice.

Everything about this dress is just bizarre.

Bad from head to toe.

As much as we love her, the unironed and clashing toned dress is just not doing it for us.

Dressed as an Oscar for the Critics Choice Awards.

A prime example of why the "boobs or legs" rule exists.

A really weird fit of a really weird dress. But, like, not in a good way. Fancy more red carpet looks? Scroll on for the best and worst dressed celebrities at the 2020 Golden Globes. Some of these looks are pretty wild!