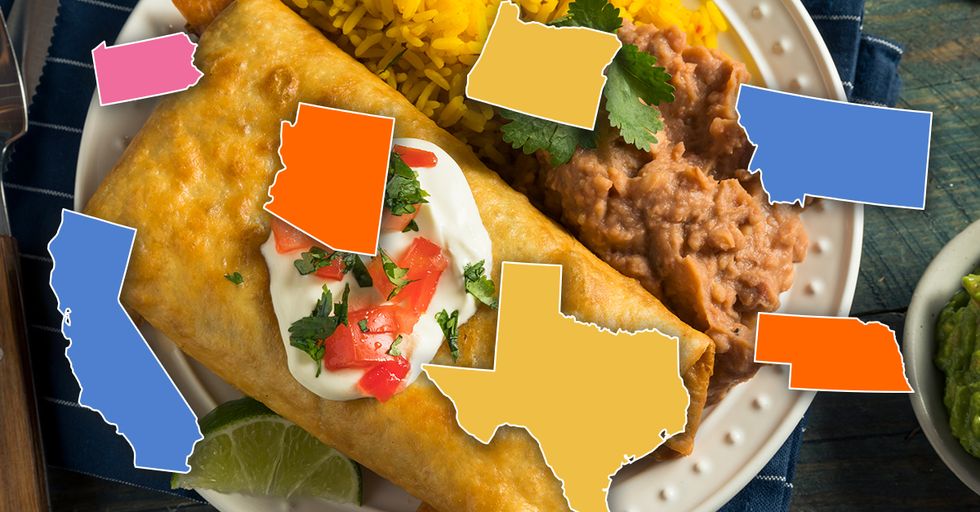 The Best Fast Food Specialties in Each of the 50 States

We are a country of diverse people and diverse cuisine. You may know your own state's more popular fast-foods, but how about the rest of the country?

From east to west coast, northern to southern borders (and many, many states in between) you might be surprised by some of our country's more beloved meals—and the origins of our most renowned fast food chains.

Check out the major fast food restaurants or specialties from all 50 states!

Alabama’s fried fruit pies (if you’ve ever had one of McDonald’s pies, they’re a watered-down version of the original thing) are a novelty in that state. Many Alabama fast food chains—Milo’s, Bojangles’, etc., make them.

Alaska’s cuisine fully takes advantage of its proximity to the ocean, and includes crab, fish, and everything in between. Pictured above: fish and chips from the Alaska Fish & Chips Company.

Arizona is known for its Mexican food—unsurprising, due to its proximity to Mexico—and the chimichanga is an Arizona state specialty.

This Arkansas-based chain, as you can likely tell from the name, is known for its chicken and waffles, tenders, and handmade sauces.

California’s In-N-Out Burger even has a not-so-secret menu, the star of which is the In-N-Out Double-Double Animal Style.

The US’ nationwide love of Chipotle actually comes from Colorado, where the first Chipotle was founded in 1993.

Originating in New Haven, this style of pizza has a very thin crust, and the white clam recipe has become a staple across Connecticut.

Delaware’s fast food chain Wings to Go’s specialty is the HOMICIDE wings. As you can probably guess, they’re spicy beyond belief.

Florida, a major source for the country’s citrus supply, is also naturally a hub of key lime pie production; you can find it as a specialty at restaurants all across the state.

Unless you live in Hawaii (or have visited), you probably don’t know of Zippy’s. Serving Hawaiian cuisine, it’s a popular fast food restaurant with locations only on the islands.

via: The Daily Meal

Pictured above: finger steaks from Milo’s Torch Cafe. Breaded and deep-fried tenderloin, served usually with (surprise!) potatoes, are a defining fast-food meal for the state of Idaho.

Honestly, there are so many Illinois (and Chicago)-specific chains that make the deep dish pizza the region is famous for, including Lou Malnati’s and Giordano’s to name a couple of the more notable players. While it’s not always fast-food, when you think of iconic food in Chicago, you think of deep dish pizza.

The popular burger chain—which specializes, as the name would suggest, in its steak burger, was born in Illinois but now based in Indiana.

Kansas is a hub of barbecue restaurants, and the state is renowned for its beef.

This one’s pretty obvious, but yes, Kentucky’s major contribution to fast food comes in the form of fried chicken, including but not limited to the actual KFC chain—first opened in 1930.

Po’ boys, beignets, and, of course, gumbo: Louisiana is renowned for its Cajun and Creole cuisine, of which gumbo is a popular and beloved piece.

Many of these coastal states are famous for their fishy cuisine. The Chesapeake Bay is filled with crabs ripe for cooking, and you can find crab cakes across the state.

This soup is a regional comfort food favorite in Massachusetts.

A favorite of most college students, the first Domino’s opened its doors in 1960, in Ypsilanti, Michigan.

A cheeseburger with a twist, the Juicy Lucy’s burger is stuffed with cheese and then cooked. Two Minneapolis bars claim to have invented the treat, though many others have since adapted the recipe for their own anyway.

Named for the murky, muddy banks of the Mississippi River, these chocolate pies are a Mississippi special.

Hunks of extra-smoky brisket chopped into cubes are a specialty of Missouri, and especially Kansas City.

Runzas are meat (and a few other ingredients)-filled bread pockets, a sandwich so popular in Nebraska there’s also a local chain of restaurants called Runza’s.

Rather than one particular type of food or notable fast-food chain, Nevada is known for the wide variety and sheer number of buffets in and around Las Vegas. Gambling is a hungry activity, apparently!

Cider donuts are the most delicious fall snack, and New Hampshire is filled with apple orchards!

The Italian-style hoagie sandwich has a special place in New Jersey, and nowhere more than at Blimpie’s, the sandwich chain which began more than 50 years ago in Jersey.

This New Mexico chain is the home of the Green Chile cheeseburger, green chile being made from local green hatch chiles and a New Mexico claim to fame.

New York has a lot of different fast food influences, but New York-style pizza has to be acknowledged. Sbarro, a fast-food pizza chain you can now find all over the country, is one of the most prominent New York-based chains.

If you’re tired of hamburgers and feeling daring, then North Dakota serves up bison. burgers as well.

Fast food chain Skyline—and the city of Cincinatti—are the kings of  chili in Ohio.

The famous drive-in restaurant first opened in Oklahoma, in 1953.

The marionberry is a mash-up; a hybrid between two types of blackberries, developed and mostly grown in Oregon.

Beef, onions, peppers, and cheese: the Philly cheesesteak has been a beloved Pennsylvania dish for over fifty years.

Del’s Frozen Lemonade is based in Rhode Island, a refreshing treat since 1948.

South Carolina is the self-proclaimed birthplace of sweet tea, and has certainly become rooted into South Carolinian culture and cuisine.

South Dakota’s special “meat on a stick" dish consists of cubed meat, deep fried and salted and eaten with toothpicks.

It’s a pretty obvious association, but Texas’ Tex-Mex cuisine can’t be beat. Nachos, tacos, BBQ; all of it is fair game in Tex-Mex.

That’s right, Jell-O is the state snack of Utah, and if you go to the Utah State Fair, you can even get it deep-fried!

The famous ice cream company is a Vermont institution, and while it began as a local ice cream shop run by two friends in Vermont, you can now visit Ben & Jerry’s shops across the country.

Virginia is all about the ham, and ham on a biscuit is a popular snack served there!

The gargantuan coffee shop chain which has since spread across the globe hails from Seattle, Washington.

via: Heaven is a Buffet

If you can fit it in a biscuit, you can get the sandwich at Tudor’s.

via: Hot Eats and Cool Reads

Wisconsin is a dairy-filled state known especially for its cheese, and many restaurants serve cheese curds—including Culver’s, a fast food chain originating in Sauk City, Wisconsin.

The Mexican food chain has expanded since its 1968 beginnings, remaining popular in its home state of Wyoming.