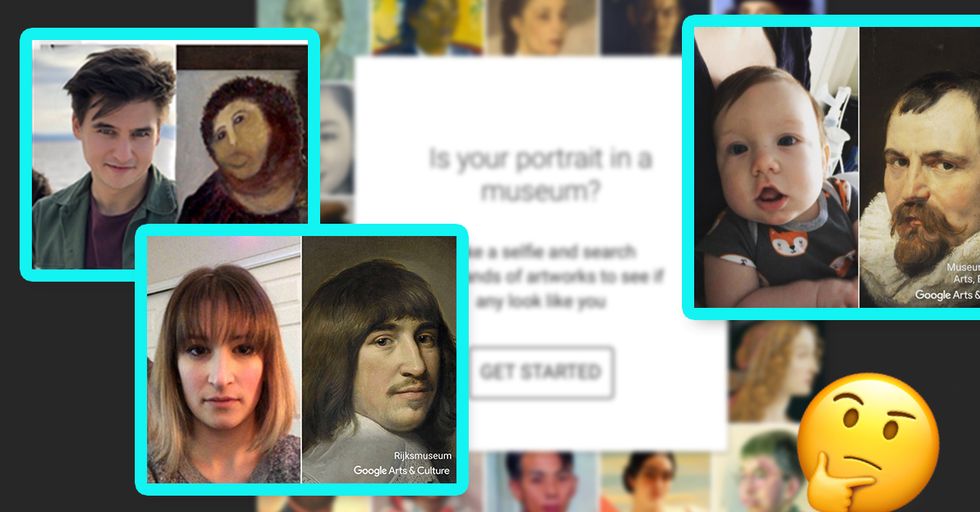 Occasionally there are still wonderful things on the Internet. I know, it's hard to believe. But it's true!

Over the past few days, the Google Arts and Culture app has gone viral for its uncanny ability to match a selfie of your face with a famous piece of art in a museum.

Chances are you've already downloaded the app and tried it yourself, but just in case you haven't we'll show you how. We'll also show you the best face matches from the app on the Internet because let's be honest, we could all use a giggle.

First, you gotta download the Google Arts and Culture app onto your phone. Go on. We'll wait. OK, now that you have it. Scroll down to the screen that looks like this:

via: Google Arts and Culture

And hit "Get Started!" It'll prompt you to take a selfie (you can't use an existing one, sorry. You're beautiful just the way you are!), and then it will work its magic.

Just gorgeous, isn't it?! Sometimes it helps to get a great match if you've put yourself in an...interesting position.

Incredible! You can click to view the entire artwork and learn while you laugh. That's the whole point of this lovely viral app anyway. Below are some of the app's greatest accomplishments...

OK, this woman looks nothing like the woman in the painting. To be fair though, we all do look that ecstatic whilst slicing a loaf, so this one is actually pretty accurate.

This is...dark...and not super accurate. But c'mon. What actual human looks like a neon blue Gary Coleman? Not even Gary Coleman looked like that. Get ready for the best baby face match in history...

This is the most perfect "age progression" picture, except for the fact that this baby exists now and the man in that painting existed a long time ago.

This woman is much more attractive than the old bald man the app says she looks like, but they do maybe look like they could at least be related.

Ben Franklin wasn't exactly known as a super stud, so this is just insulting. It must have been the pursed lips that did it.

While most of the face matches were pretty laughable, a good chunk of them were actually uncanny.

This one looks like the kid on the left went to a birthday party where they hired someone to do paintings of all the kids and this is what he came home with. It legit looks like a painting of that kid.

In this case, the green face mask probably had a lot to do with this guy's match, but that doesn't change the fact that it super looks like him.

Just as this Twitter user pointed out, even the eyebrows on this one match! It also helps if you have a super distinct hair color.

Some Google Arts and Culture face matches just aren't very flattering (even less so when you know the context of the piece the character appears in).

But one thing's for sure, whether the Google Arts and Culture app is accurate or not, it's always illuminating and hilarious. Happy face matching!