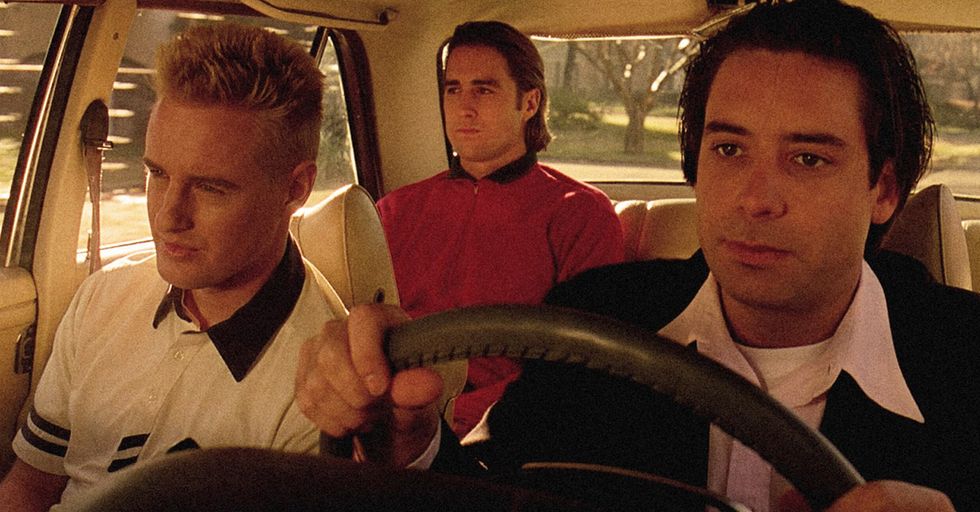 Who doesn’t love a good heist? They aren’t your typical “crime” movie. In a well-done heist flick, you get to root for a brilliant (if illegal) plot hatched by a smooth professional.

Over the years, we’ve seen many truly gripping entries to the genre. From classics—and subsequent remakes—like Ocean’s Eleven to the sci-fi heist mashup Inception, it’s a genre with a surprising amount of range.

Without further ado, here’s our ranking of the 40 best heist movies of all time!

Chris Pine and Ben Foster play Texan brothers who commit a string of bank robberies to save their family’s ranch.

This British-American crime-comedy features an intricate double plot as the search for a stolen diamond intertwines with a small-time boxing promoter who runs afoul of a gangster.

The film combines thievery and romance as a bored millionaire orchestrates the perfect crime, and falls for the insurance investigator on his trail.

This black comedy is widely considered one of the best British films of all time. In it, a group of hardened criminals attempt to manipulate—and murder—an old woman, only to become their own undoing.

This comedy caper follows a gang of criminals’ repeated attempts to steal a valuable gem.

An all-female heist ensemble in the style of Ocean’s Eleven? Sign us up!

The French gangster film (called Bob the Gambler in English) follows an ex-convict who places a bet worth millions.

Former special-ops-turned mercenary Sam (played by Robert De Niro) is hired to ambush a convoy and steal a briefcase.

The film puts a Wild West spin on the heist genre as two outlaws flee from the U.S. to Bolivia in hopes of expanding their criminal enterprises.

The crime comedy follows a career bank robber and the agent attempting to arrest him as they develop feelings for each other.

The comedy caper features two hackers and former friends facing off and attempt to steal the ultimate hacking prize out from under the other.

This noir heist film is the story of a Midwestern jewel robbery. It also features one of Marilyn Monroe’s earliest roles.

This heist-thriller is based on the London Baker Street robbery in 1971; the valuables stolen were never recovered.

This crime thriller was directed by and starred Ben Affleck. In it, Boston bank robbers aimed their sights at Fenway Park for one last score.

In Thief, a safecracker and jewel thief tries to go straight and start a family, only to be pulled in for one big con.

The heist comedy stars Audrey Hepburn as a young woman concerned about her father's penchant for forging and selling paintings illegally.

In the film, the Logan family conspires to rob the Charlotte Motor Speedway and avoid the Feds. Also, Daniel Craig plays a guy named 'Joe Bang.'

This crime-comedy was Wes Anderson's directorial debut, following two friends who attempt to pull off a series of heists.

Director Kathryn Bigelow's crime thriller features Keanu Reeves as a rookie FBI agent, and Patrick Swayze as the leader of a surfer gang responsible for a string of bank robberies.

Edgar Wright's film combines the coming-of-age trope with the story of a young getaway driver. He develops feelings for a waitress while working for a dangerous mobster, who ropes him into a job doomed to fail.

This crime thriller from Spike Lee takes place over the course of 24 hours as an elaborate bank heist on Wall Street is being pulled.

Inception's plot takes a turn for the fantastical, as Leo DiCaprio plays a thief who steals information by infiltrating a person's subconscious.

Set It Off follows the unique perspective of four inner-city women driven to desperation. Together, they hatch a plot for the ultimate bank robbery.

Bill Murray starred in and co-directed this crime comedy. In it, Murray's character Grimm robs a bank dressed as a clown, and though the heist is simple, getting away with it proves far more tricky.

The neo-noir mystery is told mainly through flashbacks, as con-man Roger "Verbal" Kint is interrogated over events that led him and his criminal team to a fiery stop.

In what is widely hailed as one of the best thrillers of the 70s, a group of criminals take hostages inside a New York City Subway car for ransom.

Based on a true story, the film follows a man named Sonny, who robs a bank to pay for his lover's sex reassignment surgery. During the robbery, however, Sonny's plans unravel quickly.

Another film from Quentin Tarantino, Jackie Brown is considered the most character-driven and mature of his works.

Paul Newman and Robert Redford play con-men who team up to ruin a gangster in a film replete with staples of the heist genre.

Stanley Kubrick's film noir follows a veteran criminal planning to rob the money-counting room of a racetrack for one more score.

There are always exceptions to the “originals are better than the remake" rule. Ocean’s Eleven is one of them.

Michael Mann's famous crime film features the diner scene we all remember. Al Pacino's Lieutenant Vincent Hanna and Robert De Niro's Neil McCauley meeting up in a diner and commiserating over the things they had in common before each threatened to destroy the other,

This crime film is also biographical, following the life, love, and death of one of the world's most infamous criminal couples.

This famous French crime film follows a group of burglars in Paris as they take on an exclusive jewelry shop on the Rue de Rivoli.

This classic is a tale of gold thievery, Mini Cooper car chases, and daring cliffhangers. The 2003 remake was pretty good, but the OG Italian Job still takes the cake. Like this story? Share it with your fellow film buffs and fans of the heist genre!