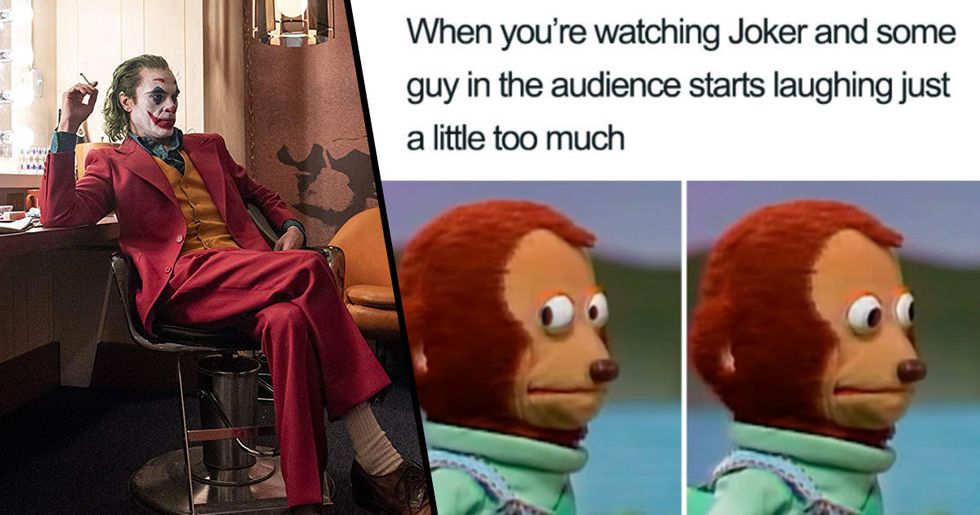 The Best Memes Reacting To The 'Joker' Premiere

Last week, one of the most controversial films of the year hit the big-screens. Joaquin Pheonix's portrayal of the Joker left people questioning their own sanity, with many people using this film as a scapegoat to blame for social problems that already exist. Gun violence, mental health, and excessive smoking habits were only three of the stand-out aspects of the film that left audiences feeling uncomfortable.

But facts are just facts. The film plays on the universal fear of insanity and I don't think that sat well with people. But art is supposed to challenge your emotions, and if you found yourself feeling any sort of extreme emotion throughout the film, then it did its job.

On a lighter note, here's a bunch of memes that have emerged as an outcome of Joker, and they are hilarious. Prepare to roll around in fits of slightly less evil laughter.

1. Can someone stop him?

This would totally freak me out.

Sadly, the Jared Leto memes are deserved for his rookie performance as the Joker.

I hope you're all prepared for October 31st...

This is also when you let your friend copy your homework but you tell them not to make it obvious.

This was an iconic scene in the film.

I wish I could unsee this!

Can you please leave Joker alone?

We all stan Joaquin.

This one is definitely not for children.

I mean, if Suicide Squad can win one, then anyone pretty much can...

I'm starting to feel bad for Jared... but if you're going to give a mediocre performance, what do you expect?

He was only playing a character... I think.

Yeah, sucks to be you.

I mean, this puppy looks pretty cute, as opposed to Joaquin, who looks like he's ready to kill.

I mean, we have to give credit where credit is due, right?

I bet he's now wishing he didn't accept the role in the first place...

I prefer to describe it as "cinematic genius."

Use whatever word you want to describe the society we live in, it's pretty messed up.

If it ain't broke, don't try and fix it.

This is why we can't have nice things! Ugh!

Either way, each persona involves a lot of evil laughter.

Sometimes, we all just wanna pee in peace and then get on with our day. God! Is that too much to ask for?

If you haven't seen the film, try to figure out the storyline using only these pictures.

I'm pretty sure there's a logical explanation for this, right? Joker is the film that just keeps on giving! I hope you enjoyed this collection of hilarious memes!