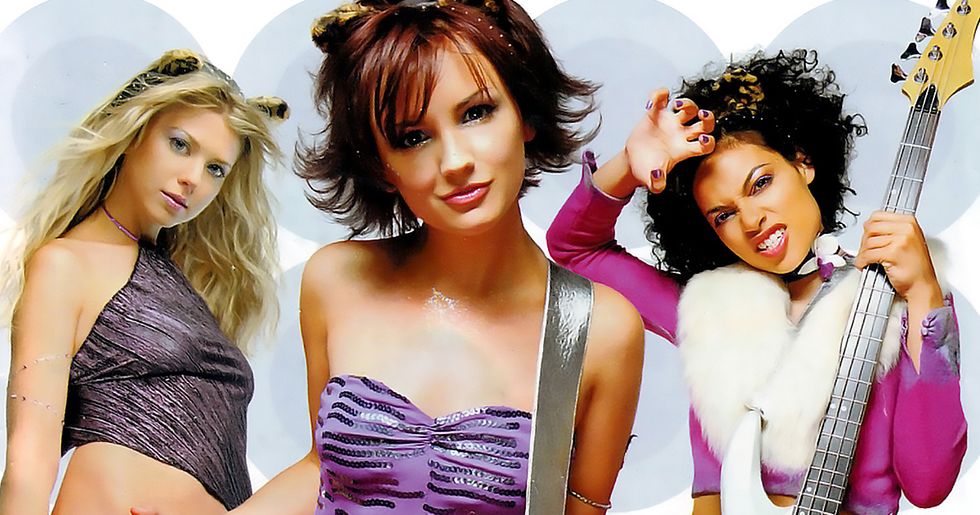 The Best Pieces of Fake Pop Culture From Movies and TV

Werewolf Bar Mitzvah. The Rural Juror. Muffin Top. And those are just from 30 Rock. Many of our most favorite movies and TV have pop culture properties that live within the world of the show were created specifically for the movie. But some of these are so freakin' good, so memorable and so fun, that their popularity has transcended the world of the TV or movie that they came from and they now have fanbases all their own.

In Seinfeld, the characters often referenced fake films like Sack Lunch and Rochelle, Rochelle. Inspector Spacetime only exists in the show Community, but we hope it makes the leap to real life. Every single song from A Mighty Wind deserved to win an Oscar, and I listen to it regularly and without a hint of irony. What you are about to read is a list of people's favorite fake pop culture properties from movies and TV. It's such a good list.

TV writer Jenny Jaffe started off the conversation by asking everyone for their favorite fake pop culture properties.

I’ve had this conversation a few times lately, so I’m curious: what are your favorite pieces of fake art or pop cul… https://t.co/NhTuKxOgqn
— Jenny Jaffe (@Jenny Jaffe)1551895147.0

She offered that all of the songs from the Andy Samberg movie Popstar are great, and frankly, I agree.

I laughed so very hard when they did The Rural Juror on 30 Rock, and then I had trouble explaining it to people because it really is that hard to say!

@jennyjaffe Anything from "Red, White and Blaine." Corey's songs about Joe in "Say Anything." And most recently… https://t.co/cDUFxnNYry
— Toby Herman (@Toby Herman)1551897734.0

Red, White, and Blaine is the show from one of the most brilliant Christopher Guest movies, Waiting for Guffman. And I am behind on Schitt's Creek so I haven't listened to Alexis' song yet but I hear it's great.

As hard as I laughed at The Rural Juror, I laughed even harder at "Werewolf Bar Mitzvah." I still listen to it regularly and I am not ashamed.

Killer Tofu! I forgot about this amazing song from Doug. Man, that was an amazing show. We were spoiled with TV as kids in the '90s.

Josie and the Pussycats

Josie and the Pussycats is one in a longstanding tradition of forming bands for the purposes of TV or movies. My favorite of this type of band is probably The Monkees.

This is the truth. Powerline is the super hot pop star from A Goofy Movie. His songs and his dance moves are amazing.

I don't know what it is about Tina Fey's TV shows, but they seem to have the best fake pop culture things in their worlds.

"Love Take Me Down to the Streets"

@jennyjaffe “Love Take Me Down to the Streets,” the fake Wings song from Role Models, is legitimately a banger and… https://t.co/LAzvAV3k32
— Katie Willert (@Katie Willert)1551895433.0

Hm, I have seen Role Models, but I don't remember this! I will have to watch it again because I need to understand. Also because it's super funny.

@jennyjaffe Dracula musical from Forgetting Sarah Marshall and the entire Infant Sorrow album from Get Him to the Greek
— Jesse (@Jesse)1551902962.0

Yes! The Dracula musical from Forgetting Sarah Marshall is really special. What a weird and wonderful thing.

I believe the movie that they are talking about it Music and Lyrics, starring Hugh Grant and Drew Barrymore.

Apparently, there was all manner of great fake pop culture references in Spider-Man: Into the Spiderverse. I would definitely watch this.

Another one from Kimmy Schmidt! Titus' "Pinot Noir" was honestly an instant classic the second it hit our eyes and ears.

This is such a deep cut, but this was so memorable! I always saw it through Matilda's eyes, though, so I thought it was kind of depraved and crazy.

My muffin top is all that, whole grain, low fat/I know you want a piece of that/But I just want to dance! This song, another 30 Rock contribution to the list, is genius.

Full disclosure: I had no idea when I started writing this list that "Scotty Doesn't Know" was a song created for the movie Eurotrip. I went my whole life just thinking it was a real song!

Yes! This is such a good answer that I didn't think of because it's almost too obvious. Galaxy Quest, the TV show within the movie Galaxy Quest, is great.

Not going to lie, "Smelly Cat" is just like, a real song that I consider part of my life as a real song. It's that good.

"Christmas Is All Around"

This song from Love Actually will get stuck in your head if you let yourself hear it for even one split second. And there it goes. Darn.

The world of Community is so rich, and Inspector Spacetime is part of that rich world. This is a worthy addition to the list.

Mouse Rat is Andy's band in Parks and Recreation, and I am not lying when I say I teared up to "5,000 Candles in the Wind."

"My Shiny Teeth and Me"

Ooh, an entry from The Fairly Oddparents! Interesting! This show was way better than it ever got credit for.

I like this entry so much! It's different from all the others, but it really is so good. That's like, an insane, real piece of art, and it was created for a movie! So cool.

Songs from The Wedding Singer

I mean, this song is depressing and sad, but I am not kidding when I say that "Grow Old With You" is one of my favorite songs. Of all time.

This is so true. Reptar on Ice from Rugrats is a classic that will go down in history. I guess it already has.

Boyfights is from Arrested Development and while I personally don't think it holds a candle to Mr. Bananagrabber, it's pretty good.

OK, let's get real here for a second. The whole world of Scooby Doo is insanely cool and funny, and all I want is to be part of it.

Yes, so good. But the songs from A Mighty Wind take the cake for me. Share this with a fellow pop culture nerd!