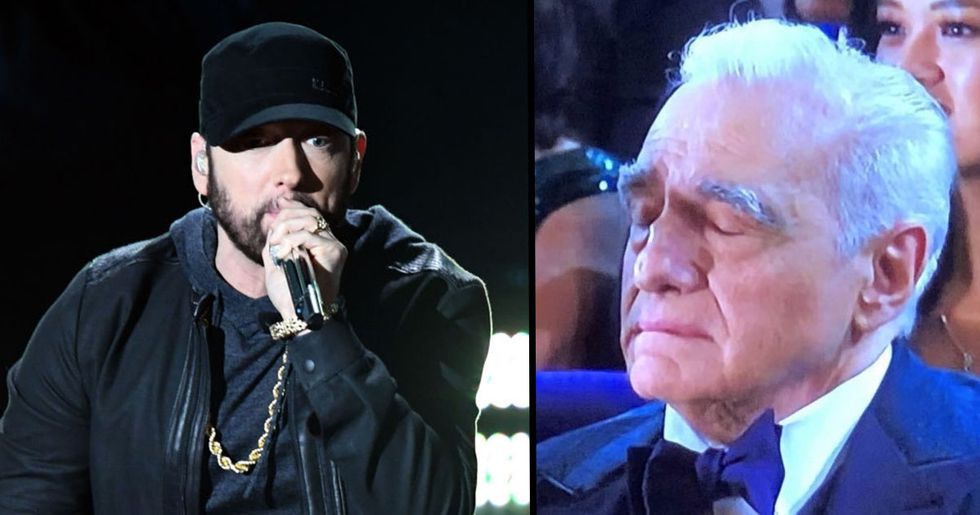 Tonight is the night we've all been waiting for. Hollywood's biggest stars will hit the red carpet for one of the industry's most coveted events... the Oscars. The whole world has been waiting in anticipation for this evening, where winners of some of the most coveted awards will be announced from an all-star shortlist.

But the awards are not the only thing that has got the internet talking. Eminem took the stage for a performance and turned the Oscars upside down.

Keep scrolling to see the audience's hilarious reactions to it...

The Oscars are one of the biggest events in Hollywood.

The biggest names in the industry hit the red carpet tonight to see who will be honored with an award this year.

For the second year in a row, the annual event is hostless.

People have been extremely excited since the nominations were announced.

Today, we find out who will be the winners of these coveted prizes.

So, keep scrolling to check out what's been going down at this year's Oscars ceremony.

Of course, it's not only about the movies.

In the past, there have been some hits...

Back in 2013, the actress decided she was going to bring her character from the Harry Potter movies to life. She walked the red carpet in a black and white layered dress that looked like it was chewed by her neighbor's dog.

And just when you think no one could top it, out came St. Vincent.

2018 saw some risks being taken, but none that actually paid off. St. Vincent decided she was going to wear a choppy black number with a silk ribbon around her waist. And don't even get me started on that horrible sleeve. It looked like a robot titan was brought to life during the design of the dress. Yikes.

However, the Oscars has given us some other unforgettable moments.

Jennifer Lawrence made headlines a few years ago when she had a wardrobe malfunction that left her red-in-the-face. As she got up to accept the award for Best Actress in Silver Linings Playbook, she tripped on the stairs.

But hey, it did get her a standing ovation...

In her speech, she talked about the moment saying: “You guys are just standing up because you feel bad that I fell and that’s really embarrassing, but thank you." And that was the moment we all collectively decided we were head over heels for Jennifer Lawrence.

And then we have Ellen Degeneres' groundbreaking selfie.

It is no secret that the world of film has been bubbling with controversies.

But up until a few years ago, no one was talking about it. Then in 2016, out came Chris Rock, with an opening monologue that has been etched in our brains because of its painfully hard-hitting nature. And it was hilarious.

He addressed the issue titled #OscarSoWhite.

It seemed as though only white actors and actresses had been credited for their roles in film, as twenty of them had been nominated for lead and supporting acting categories for 2 years in a row and the only way to address it was to crack out the line: "I'm here at the Academy Awards, otherwise known as the White People's Choice Awards." And it didn't get any better from there.

But this year's most iconic moment topped them all...

And yes, it involves a surprise performance by none other than Slim Shady, otherwise known as Eminem.

After Laura Dern gave an emotional speech about her parents being a hero... Eminem popped up out of nowhere.

I mean, it's only fitting that he performed "Lose Yourself" a song he previously won an Oscar for all the way back in 2003, but maybe that's exactly where it should have stayed... In 2003.

The crowd didn't seem too pleased... Check out the overall consensus.

And her brother mirrored her reaction.

Finneas O'Connell looked like he was watching his dad drunkenly dance at a wedding or something.

Viewers have been left in stitches after the camera showed Menzel's reaction on screen.

But by far, the best reaction came from Martin Scorsese...

He's probably thinking: "Eminem who?" and wishing he had opted to stay home. No award is worth this.

Check out his performance:

And if you're in the mood to see more Oscar-related content, then have a read about how Natalie Portman decided to make a bold statement this year...