The Best 'Storming Area 51' Memes on the Internet | 22 Words 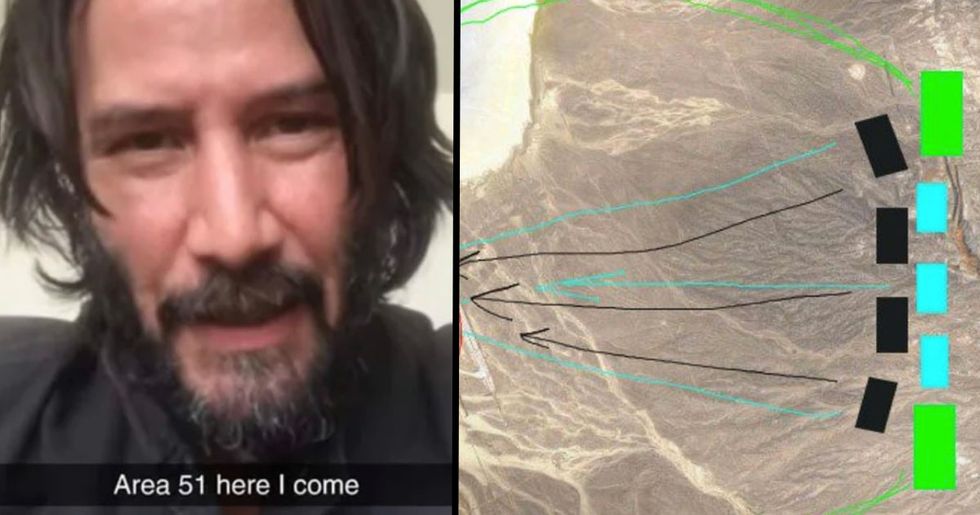 The Best 'Storming Area 51' Memes on the Internet

You must have heard about the elaborate plan that some nerds on the internet created to storm Area 51, right? Well, turns out the whole thing was a joke and they were just trolling everyone.

But this "joke" has actually taken a weird turn and now 2 million people have joined a group that is planning to go ahead with the mission. Even after the U.S. Military has issued a warning against it, according to reports, the plan is still on. Yes, some people take hunting aliens very seriously.

Thankfully, we don't. So here are a bunch of hilarious "storming Area 51" memes to make you chuckle. Happy scrolling!

Let's start you off nice and easy, with a little bit of young Ronald Weasley. The bad photoshopping really makes this meme iconic.

I think there might be a bunch of other things alerting the guards, besides your ass cheeks...

That game was definitely an accurate representation of storming Area 51, for sure.

This is actually very accurate...

It seems as if people have even thought about their ride home. How considerate!

This might be my favorite of the bunch. How accurate.

9. This could be the start of something beautiful...

I mean, if there's a chance that they'll get to drive away in a brand new spaceship, I'm in!

I'll be watching from the bushes with popcorn in my hands.

I mean, it's all over for the government if Keanu Reeves makes an appearance.

It may not be the smartest idea, but, hey, the world's going to end anyway.

It couldn't be a meme compilation without The Simpsons, could it?

Not the perfect "alien hunting" attire, but I'll let it slide, Keanu.

16. Advice from a time traveler.

So, it's official guys, the plan is going to succeed.

Obviously, it would be Kyle.

Can we catch a ride?

I mean, it seems as if 2 million nerds are going to stick to "the deal," so don't worry!

I suppose they'll all realize when they come face-to-face with the U.S. military guards who are pointing real guns at them, as opposed to Nerf guns...

Even President Donald Trump is curious as to see what's lurking in the depths of Area 51.

An alien isn't just for Christmas, it's for life.

That sounds exactly like something that Kyle, the emo millennial, would say...

The biggest discovery from all of this could be "Area 52." Yes, I know it doesn't exist, or does it?

The revolution has well and truly begun...

Calling all Naruto Runners, your assistance is needed... Finally.

I kind of feel sorry for the people working at Area 51. Imagine dealing with thousands of Kyles who are hyped on Monster with their Nerf guns...

I'm sure if the aliens trapped inside Area 51 wanted to escape, they would enlist the help of someone better than a mere mortal... named Kyle.

Doesn't seem like it's going to be much of a fight, does it?

I mean, I'm sure if you guys were serious about this, you'd have notified the rest of the nerds in a less public manner. Now the government is on your asses...

33. Bonding with the bestie.

Friends that raid Area 51 together, stay together.

Why is this one so funny on all different levels? I'll never get tired of this one.

Maybe the aliens are actually waiting to be broken out? I guess we'll find out in September

Like a true millennial, I'm only here for the memes.

I mean, this would actually be pretty cool, right?

If you manage to release the aliens, someone better throw a party!

By this time, it'll be too late. It was nice knowing y'all!

Casey Frey knows what's up. If you haven't seen this iconic video, I would suggest you watch it so you know what I'm talking about...

I laughed way more than I should have...

If you manage to find any aliens, and if they're as cute as the Little Green Men from Toy Story, let me know so I can adopt one!

Will this raid be worth all the carnage? Who knows?

What makes this funnier is the fact that ASOS actually tweeted this from their official account. They totally believe in this Area 51 raid.

I mean, if they're not into "The Rolling Stones," they're clearly uncultured and we don't want them.

If the alien that I adopt doesn't get along with my family, I'm going to disown... my family.

Why do I have a feeling that the Naruto runners are going to be the only ones to turn up?

This explains so many things...