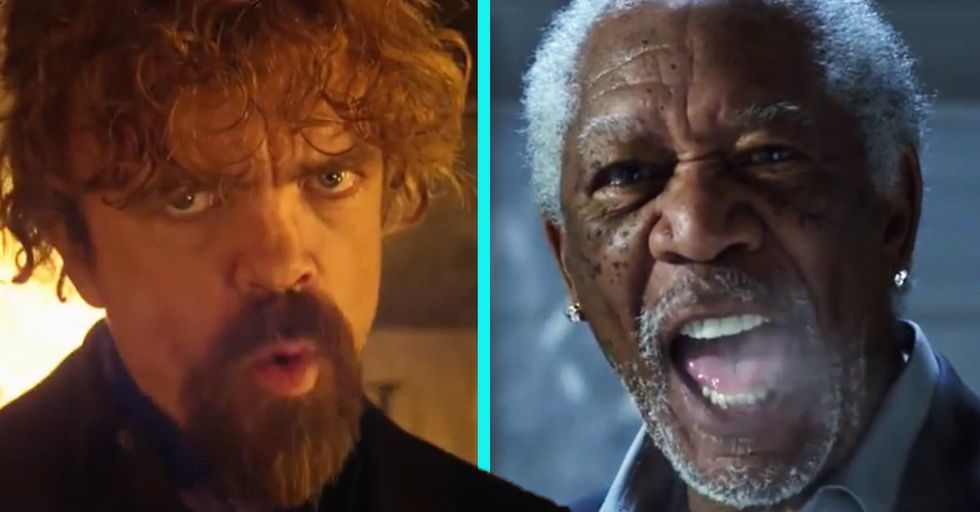 The Best, the Worst, and the Absolute Weirdest Super Bowl 2018 Commercials

In one of the best mashups of the year, Doritos and Mountain Dew went head to head with an ad featuring Peter Dinklage lip-syncing Busta Rhymes while Morgan Freeman lip-synched Missy Elliot.
Honestly, the lip-synching isn't that great – a testament to the speed and dexterity with which Rhymes and Elliot rap, but for the sheer novelty of seeing Dinklage and Freeman rap, this commercial is pure gold.

Another instant classic from the moment it seared itself into our eyeballs asks a great question – who would fill in if, for some reason, Alexa lost her voice.
In our minds, any of the (mostly inept) alternatives work except for Sir Anthony Hopkins, because – Sir Anthony Hopkins in a garden surrounded by peacocks? Creepy.

From now on out, Keegan-Michael Key should explain everything. Literally everything. His turn as an explainer breaking down unnecessarily complex language is just amazing. Also, Big Sean popping out the backseat? Pure genius.

One of the most head-scratching ads of the night saw Bill Hader and work colleagues discovering they can actually stack Pringles to create new flavors.
Honestly, we weren't that enthused. They could've used Bill Hader better.

Another ad that didn't quite land for us was Martha Stewart vs. the Jack in the Box mascot. Apparently, Jack in the Box has a new food truck line, but the concept didn't quite work for us.
They even tried to do a new hashtag – #JACKvsMartha. Yeah, no. The commercial was a bit funny though.

A truly excellent commercial series saw David Harbor shilling Tide in the most unexpected places. Here he is, stealing shine from from the Old Spice commercial guy – and taking up space on his two-saddled horse. Yes, two saddles. Weird, right?

Here Harbour is again, only this time, he's also taking over a car ad, a beer ad, a mattress ad, whatever type of ad has clouds in it ad – basically, all the ads.

One of the most unexpected, and yet totally apt commercials sees It's Always Sunny In Philadelphia actor Danny DeVito as the red M&M, who is annoyed that people always want to "eat him."
When he picks up a lucky penny and transforms into a human being, he then proceeds to run around the street asking people if they want to eat him until he gets– well, you have to see for yourself. Well played, M&M's, well played.

One of the most disappointing commercials of the night featured Tiffany Haddish, the surprise audience favorite from the blockbuster movie Girls Night.
Given Haddish's previous performances, and her avowed love of Groupon, we were prepared for a hilarious ad filled with gut-busting gags. What we got was a resounding meh, and not even enough Tiffany Haddish. Ah well, ya win some, ya lose some.

Fabreeze "The Only Man Whose Bleep Don't Stink"

Fabreeze's subversively hilarious commercial, "The Only Man Whose Bleep Don't Stink" was so clever, it lost us halfway through.
But it was funny though. And subversive. Points, right?

What would happen in a world with endless guac but no chips? Avocados from Mexico examines this very dilemma with its hilarious satire #Guacworld which features a cameo by an oddly very much in-place Chris Elliot.
There's also a very subtle dig at the millennial bourgeoisie through mention of avocado toast. It's all very funny... until people go crazy over avocados.

One of the most oddly disappointing commercials of the night was Bud Light's "The Bud Knight." It started off promisingly – there was the dragon, knights pummeling each other – even a man on fire.
Somewhere along the way, however, it just fizzled, and we were left with a beautiful (and expensive-looking) package, but no real substance. Disappointing.

You'd think one of the basic things ad people would know is that cultural icons like Martin Luther King were sacrosanct and shouldn't be used to shill pick up trucks.
Guess not. This ad just left a bad taste in our mouths, pure and simple.