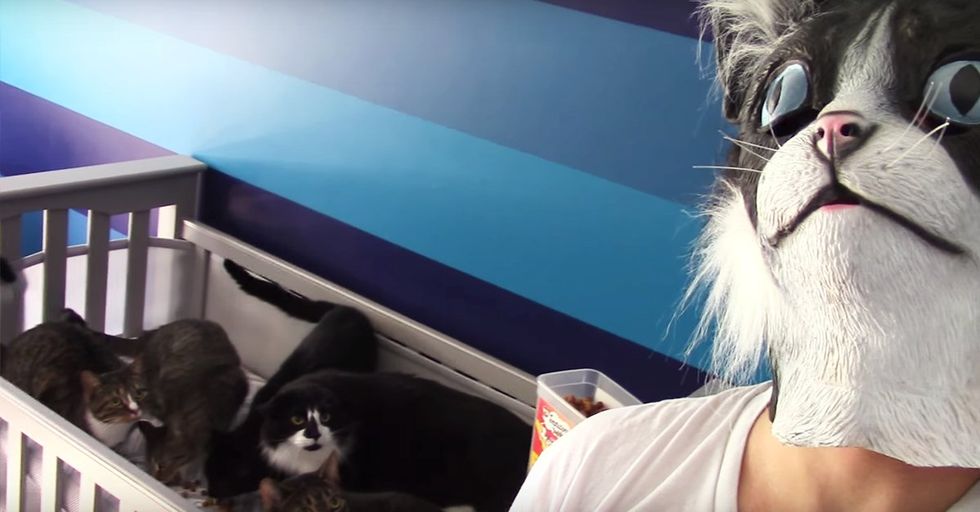 If you're having a rough day, you've come to the right place.

I've collected some of the funniest videos on YouTube here in one convenient location for your viewing pleasure.

Seriously, if you can make it through these videos without cracking a smile, something is seriously wrong. You should probably get to a humor doctor.

I don't know how he expected this scheme to go down, but this was clearly better than anything he could possibly have hoped for. I don't think I've ever seen cats scatter so quickly.

I am convinced this video is made at least 10 times funnier by the fact that the dog's name is Fenton. Everything about it is just so perfect.

My favorite part about this video is that the documentary team obviously chose to leave that specific shot in. It's not like it would have been hard to take another shot of the bakery front.

How many ways do you think there are to misspell the word "pregnant"? Whatever you guessed is probably too low.

This video starts out slow, but the payoff is so great as the situation escalates. The guy's commentary is A+ work.

I imagine that as a parent, you're constantly torn between wanting to save your kids from the harsh realities of life and also wanting to watch something hilarious play out. I admire this mom for her dedication to the latter option.

I know nothing about dog shows, but if they're even a fraction as entertaining as this video shows, I am going to start watching every single one.

This entire video is pretty funny, but it's the last outtake that left me with tears in my eyes. I hope the person in the polar bear suit got a raise.

Watch as the woman in this video becomes more and more frustrated at Jack's inability to get his one line correct. And if that's not funny enough, wait until she gives it a try.

Yes, this is hilarious. But it's equally impressive!

I can't tell if this is mostly hilarious or mostly adorable. What I can tell you is that I have a huge smile on my face every time I watch it.

And that, friends, is why you should never try to one-up someone else's joke. I love the kid for trying, though.

I challenge you to find 6 seconds of video that is funnier than this clip. I'm telling you right now: It can't be done.

I've loved this video ever since I discovered it a few years ago. Someone should remix it into a song.

Really, what else is there to say when you've just tumbled through the ceiling? That's no reason to forego politeness.

The dog's body language is probably the best part of this video. He is obviously not messing around. Hurry up, Brenda! (I'm assuming his mom is name Brenda.)

So majestic. So powerful.

They say practice makes perfect... But honestly, I think whoever is behind this video may be beyond help. Share this with someone who could use a smile today!