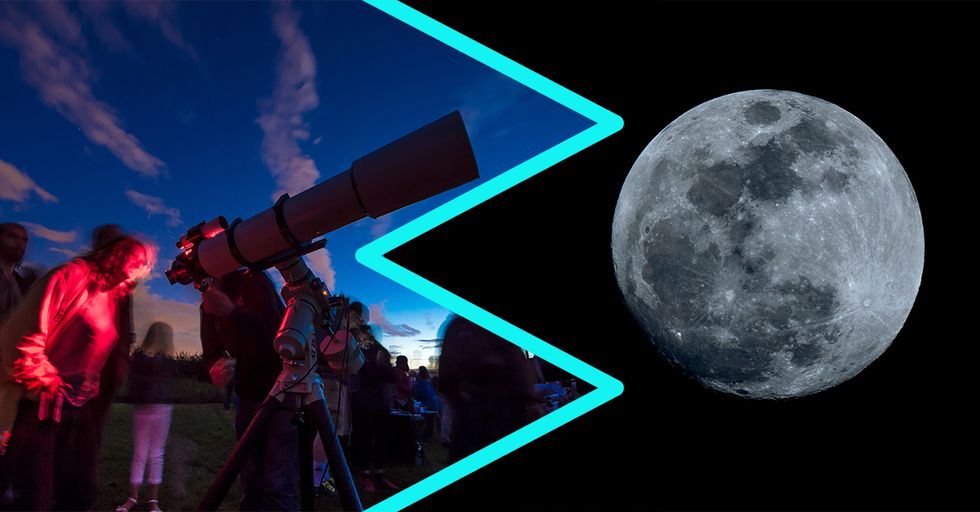 When something is rare we say it happens "once in a blue moon." This Wednesday's moon is even more special. Not only is it a blue moon, it's a super blue blood moon, which sounds made up, but totally isn't! This lunar phenomenon hasn't happened in the US for about 150 years.

Here's the best way to get a glimpse at this super blue blood moon so you don't have to wait another 150 years to see it.

First, what exactly is a super blue blood moon?

The reason a super blue blood moon is so rare is because it is actually three lunar phenomena happening at once: a combination of a blue moon, a supermoon, and a blood moon.

A supermoon is when the moon is both closest to earth in it's orbit and full.

This combination is pretty rare, supermoons occur about every 14 months. During a supermoon the moon will look very large in the sky because of how close it is to Earth. (Still about 221,500 miles away, though!)

A blue moon is when two full moons occur in one month.

Blue moons are actually not as rare as the expression may lead you to believe. They happen about once every two years. In 2018, though, there will be two blue moons, one in January and another on in March.

A blood moon is actually a lunar eclipse.

A lunar eclipse is when the earth passed in between the sun and the moon, which creates a shadow that covers the moon. During a lunar eclipse the moon takes on a red color because the sun's rays that are hitting it are reflecting dust in the atmosphere, thus we call it a blood moon.

The moon on January 31, 208 will be a combination of all those things, which is very rare.

The second full moon of the month moon will be at its closest point to earth in its orbit, and there will be a lunar eclipse! This moon is doing it all! It's basically the Justin Timberlake of moons. But how can you catch a glimpse?

You're going to have to get up early.

On the East Coast of the US the peak event will be visible starting at 6:48am, and you won't be able to see the full eclipse because the sun will rise before it ends.

People in Central Time will have a little bit better show.

If you are in US Central Time, the peak of the eclipse will be visible starting at 6:15am to 6:30am but then, alas, you too will be blocked from seeing the whole thing start to finish by the sun.

People in Mountain Time can see a little more.

And if you live on the West Coast: congrats! You'll be able to see the whole thing.

But you will have to get up the earliest. For those on Pacific Time, the eclipse will begin at 4:51am and end at 6:05am.

So set your alarms and get out early because this only happens once in a super blue blood moon!

And you don't even need to wear funny-looking glasses to look at it!