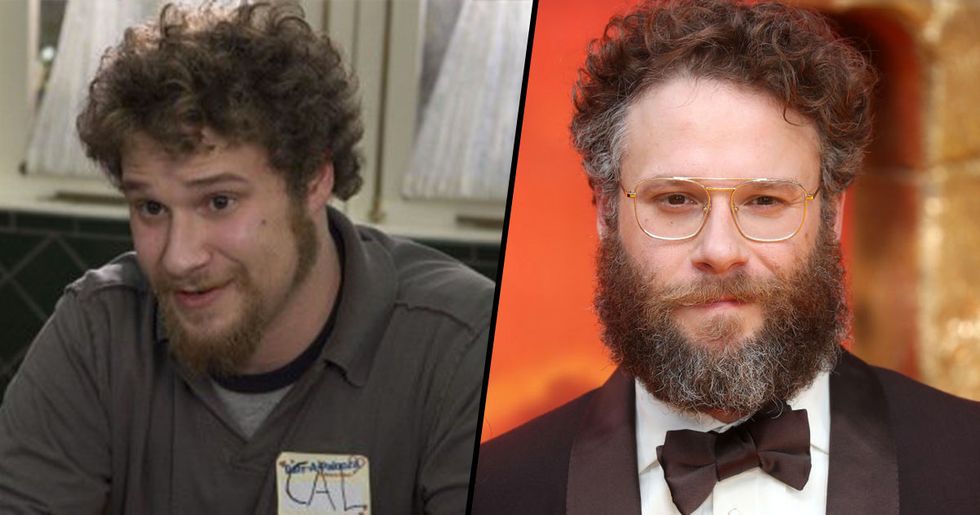 There were many great comedies that hit the box office in the 2000s. The Hangover, Anchorman, Shaun of The Dead and Old School were some of the greatest, but perhaps one of the best comedies to come from the '00s was The 40-Year-Old Virgin.

Fourteen years ago, the R-rated comedy hit screens and has since cemented itself as a comedy cult classic, and basically one of the greatest things to come out of '00s cinema.

So, over a decade on, get ready to feel old as we show you the cast of the movie then vs now.

You won't believe how much they've changed...

He's curated quite a nice life for himself.

He's got the job, the apartment, a good social circle. There's pretty much nothing missing in his life.

But he's a pretty lonely guy.

Oh, and he's also never had sex before.

Which causes many of his friends, including the very laid-back David (Paul Rudd), to push him towards finally losing his virginity. And that's basically what the film is about, in brief terms.

Iconic moments such as the "you know how I know you're gay?" scene were all improvised.

The movie also had a pretty star-studded cast.

Though, at the time, many of the cast members were either not very well-known or were simply making brief cameos. Although many of them have gone on to maintain a blooming career, not to mention the fact that several look completely different. So, keep reading to see the cast of The 40-Year-Old Virgin then vs now...

Let's start off with Catherine Keener.

The actress starred as Trish, whom Andy began to fall madly in love with.

She's gone on to star in many major movies, including Captain Phillips; the extremely creepy thriller, Get Out; and, most recently, Disney's Incredibles 2.

Next up we have Kat Dennings who played teen, Marla, in the movie.

Trish's middle child, Marla, would often argue with her mom about all things sex education and birth control related - which Andy would frequently have to mediate.

Now, Dennings is mostly known for her role in Two Broke Girls.

Cal, one of Andy's co-workers was played by Seth Rogen.

Cal literally thought that Andy was a weirdo killer until he realized that he was just a huge introvert.

Of course, we all recognize Seth Rogen now...

He's had a pretty gleaming career - writing his own movies including Superbad and Pineapple Express, as well as co-starring the recent live-action movie, The Lion King.

Next, we have Paul Rudd.

The actor played another one of Andy's co-workers, Dave, who spent most of his time fixated on his break-up with ex, Amy.

Paul Rudd is pretty much known for not really aging at all, and, to be honest, given that it's been well over a decade since the movie was filmed, he isn't looking too bad for it. Most people now know the star for joining the Marvel universe as Ant-Man.

Speaking of Dave's ex, Mindy Kaling is up next.

As you've probably guessed, the actress played Dave's ex-girlfriend, Amy. She even bumps into him years later at a speed dating event. Awkward.

We're sure that you all remember her from The Office, but she's also gone on to star in her own show, The Mindy Project, as well as most recently writing and co-starring in the 2019 comedy, Late Night.

Next up we have another one of Andy's co-workers played by Romany Malco.

The actor starred as Jay, who's the only one in the group that actually has a partner.

Now, the star is continuing to hit the big screen.

He has starred in movies such as Blades of Glory and is currently on ABC's A Million Little Things.

Of course, we've got Jane Lynch.

She starred as Paula, Andy's manager at the store, who also offered to have sex with Andy when she found out that he was a virgin. Yikes.

Over a decade on, here's what she looks like:

The star has continued her comedy acting career, most famously starring in Glee, The L Word, and in animated classic, Wreck-it Ralph.

Next up is Leslie Mann.

She starred as Nicky, the first girl that Andy tried to hook up with at a bar. Although it didn't end well as she puked up all over him. Gross.

The star has gone on to feature in several of Apatow's other movies.

Mann has been married to Judd Apatow, who directed 40-Year-Old-Virgin, since 1997, and has gone on to star in many of his other movies including Knocked Up and its spinoff, This is 40.

Beth is yet another woman that Andy attempts to hook up with.

Played by Elizabeth Banks, Beth is an employee at a bookstore close to where Andy works. Towards the end of the movie, Andy even comes extremely close to cheating on Trish with her.

You'll probably recognize her as Effie Trinket from The Hunger Games or for appearing in Modern Family. But the star is embarking on a directorial venture as she has directed, co-written, and starred in the upcoming Charlie's Angels movie.

He had just one line in the whole movie.

Masterson went on to star in Fox's Last Man Standing and the 2010 series, Greek, as well as briefly appearing in an episode of How I Met Your Mother.

Does Johah Hill need any introductions?

Of course, you all know who this actor is. He starred as an unnamed customer in Trish's store who was desperate for a pair of glittery boots.

Hill went on to star in countless '00s comedies.

One of the most popular being Superbad. Although he's also written and directed his own movie, named Mid90s, and lent his voice to the animated trilogy, How To Train Your Dragon.

Finally, it's the one you've probably been waiting for...

The one and only Steve Carell starred as the lead, Andy, a painfully introverted guy who's never had sex before. Although, many of us already knew Carell as Michael Scott from The Office.

Following his comedy stint, the actor has gone on to play more serious roles, too...

He's starred in Little Miss Sunshine, Foxcatcher, and, most recently, in 2018's Beautiful Boy, as well as voicing characters in animated favorites such as Despicable Me and its spin-off, Minions. If all of the 40-year-old Virgin talk is leaving you desperate for your nostalgic comedy fix, we've got you covered. Keep scrolling to check out the best rom-coms of the '90s.