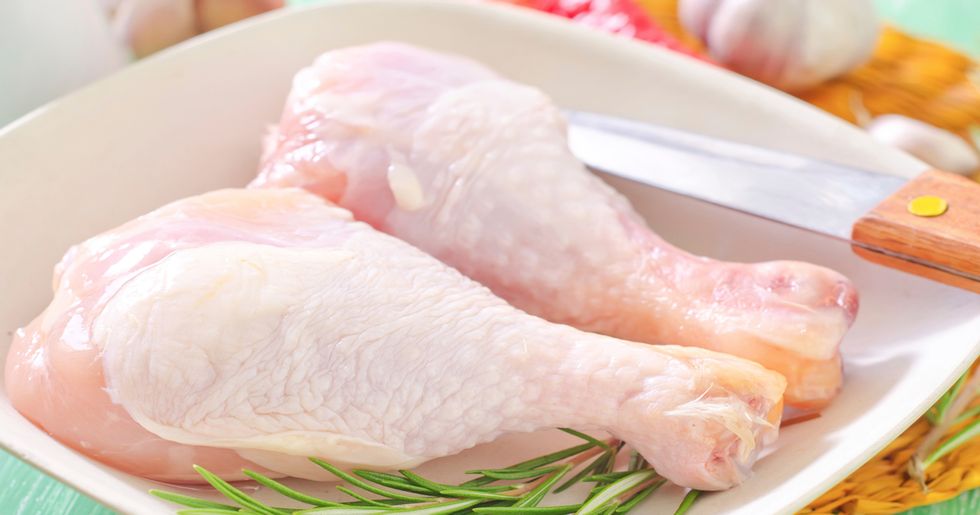 When it comes to the kitchen, everyone has their own way of doing things. For some, a kitchen is a sacred place. Food brings people together. While sure, it sustains us and gives us adequate nutrition we need to be healthy, it can also be a communal experience. In some families, food is a love language. It's what brings everyone together from their busy schedules. Despite the chaos of the world and everyone's individual lives, coming around the dinner table can be a constant steady.

Eating the actual food isn't the only great part about it - preparing and cooking can bring about its own joys. There's something incredibly satisfying when it comes to preparing a meal for loved ones. Who doesn't love that sense of accomplishment that comes with perfecting a new recipe?

For all you cooks out there, here's some interesting news that might throw a wrench in your kitchen routine. The CDC has reported that you should never wash raw chicken before preparing it. Naturally, this has the internet divided and spiraling into chaos.

Chicken is very versatile and delicious.

It's like the poultry that keeps on giving. There are endless ways to cook chicken.

It's a staple many people's diets.

It's a good source of protein, and pretty easy to make. What's not to love about chicken?

For most people, they have their tried-and-true methods of cooking chicken.

Many people grow up watching their parents cook and prepare food. Cooking is passed down from generation to generation.

Family recipes are a wonderful part of a family legacy.

A lot of people swear by their own methods in the kitchen. Don't you dare challenge a grandmother's way of preparing lasagna!

But, every once in a while, a piece of information drops on the internet that sends people spiraling.

This time, the Centers for Disease Control and Prevention is behind the latest fact that has sent the internet into a tizzy.

They recently tweeted out that people should absolutely not wash their raw chicken.

The reasoning behind this is that washing the raw chicken can actually spread germs to your countertops, any dishes you have in the sink, and other food.

Raw chicken is no joke when it comes to bacteria.

It's often contaminated with Campylobacter bacteria, Salmonella, and Clostridium perfringens bacteria. When not properly cooked or handled, these bacterias can spread and cause food poisoning.

When handling raw meat of any kind, it's incredibly important to be careful.

The CDC recommends a few helpful tips (including the controversial not washing tip...but more on that later) when handling raw chicken.

That way, if any juices leak out, other food doesn't get contaminated. That would definitely not be fun.

Washing your hands is very important when it comes to handling raw chicken.

You're supposed to wash your hands with soap and warm water for at least 20 seconds after handling raw meat. A quick rinse will not get rid of the bacteria.

Always use a separate cutting board for raw chicken.

It's tempting to just throw some vegetables for chopping on the same cutting board as your raw chicken, but that's a big no. Nobody wants to eat bacteria-infected veggies!

But one of the tips that the CDC offered when it comes to handling raw chicken has seriously divided the internet.

People are not happy with the CDC advising folks to not wash their chicken. You would think people would trust the CDC, right?

People are not pleased.

"Sitting in a maxi pad" is a very particular way to describe raw chicken. The imagery is so...vivid.

The sarcastic quips were rolling in.

@CDCgov I'm glad the CDC came out with this. The first thing I used to do before cooking chicken is empty out every… https://t.co/zX4QsOhWTx
— TheTruth (@TheTruth)1556496572.0

Putting every single dish in the sink prior to washing raw chicken is totally a normal thing to do, right?

Some people chimed in with their method of washing chicken.

Using vinegar, lime, and lemon is how lots of people prep their chicken before cooking.

Some people were not coy about their feelings.

Some people went truly savage with their replies to the CDC's tweet.

This tweet is hilarious and ridiculous. The CDC really has people heated!

People were quick to share their advice on how to prepare raw chicken.

Others thought the CDC's advice was pointless.

@CDCgov We’re still washing chicken over here. Then we’re going to wash the dishes/utensils bc we’re not dumb.
— CarolefcknBaskin (@CarolefcknBaskin)1556448249.0

People feel that you can wash your chicken and then wash everything it has touched. They don't have to be mutually exclusive.

Others simply warned not to listen to the CDC.

Which, in most cases seems like terrible advice. But people are passionate about their chicken!

Lots of people pointed out that they've been washing their chicken for years.

They've never gotten sick from washing their chicken, so they're fine with continuing to do it.

Who knew the CDC could illicit such a response?

A lot of people have thoughts about this and they are not keeping their thoughts to themselves.

Others stuck up for the CDC.

They pointed out that the CDC does actually know what they're talking about. After all...this is their area of expertise.

The fight continued. People didn't want to hear about how washing raw chicken spreads germs. Humans are creatures of habit, after all.

Some enjoyed watching the chaos unfold in the comment thread.

Even though the CDC provided sound and factual reasoning, people didn't care.

But people came through for the CDC.

@triceydub Yes I remember. And there are videos showing how microdroplets of water spray everywhere. But people can… https://t.co/qO3GUNAZOW
— Angela (@Angela)1556374962.0

Bacteria can spread viciously. Why fight the CDC on something they are experts in? They know what they're talking about.

Some people had a more diplomatic approach.

But there is no middle ground when it comes to a passionate Twitter thread. Like bacteria, it cannot be contained.

The thread had over 600 responses to the original tweet.

Eventually, the CDC responded to the sheer chaos and warzone they had created.

They clearly did not expect this type of response from the internet.

They were just trying to keep everyone safe from their raw chicken. "Don't wing food safety!" they warned.

It all comes down to being smart when handling raw chicken, as well as understanding how serious bacteria is and how easily it can spread. Are you Team Wash Chicken or Team No Wash?

Your kitchen is arguably one of the most important rooms in your house. After all, that's where all the food is, right? With that in mind, it can be extra helpful to have a few "hacks" at your disposal in order to make your kitchen tasks easier than ever before. Behold! 20 cheap kitchen hacks that are pretty much guaranteed to change your life for the better...