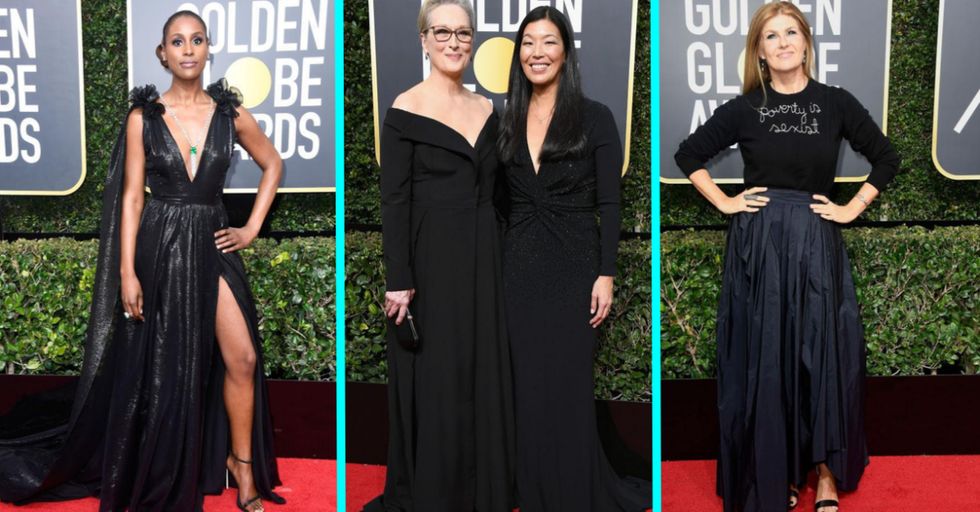 The Celebrities Making a Statement in Black at Tonight's Golden Globes

As many already know, the men and women of Hollywood are making a big statement at tonight's 75th Golden Globes ceremony.

Many have vowed to wear black at tonight's event as a symbol of protest against the sexual harassment and assault that has plagued the entertainment industry for years, but only recently come to light.

So without further ado, these are the incredible (and stylish) men and women wearing black to tonight's Golden Globes:

Williams starred in Get Out, which is nominated for Best Musical or Comedy.

The Stranger Things kids all showed up dressed in black.

And they look adorable! Stranger Things is nominated for Best Television Drama.

She immediately started making headlines by calling out E! for not paying their female cohost the same as their male cohost in an E! interview on the red carpet. Messing stars in the revival of Will and Grace, which is nominated for best Television Comedy.

Alexis Bledel went the pants route with a black and white jumpsuit.

Bledel stars in The Handmaid's Tale, which is nominated for Best Television Drama.

Joe and Nick Jonas posted their all-black look before they even got to the Globes!

She is nominated for best actress in a mini-series for The Sinner: her first nomination!

Issa Rae is all in black and killing it with that high slit.

She is nominated for Best Actress in a Musical or Comedy for Insecure.

Meryl Streep showed up in a long-sleeved, shoulder-less black dress.

She also came with a date: Ai-jen Poo, the director of Domestic Workers, an organization that works towards building fairness and equality for women in the workplace. Streep is nominated for The Post.

Connie Britton made a very literal statement in this long black skirt and embroidered sweater combo that reads: "poverty is sexist."

She's not nominated for anything but we are still very glad she is here.

Greta Gerwig and Saoirse Ronan both showed up in black and with cute matching short blonde hair and being best friends.

They are nominated for Lady Bird (and for being perfect).

Penelope Cruz wore black in lace in an off the shoulder dress.

Rocking a dramatic train and equally dramatic eyebrows, Cruz looked gorgeous in her black dress. She isn't nominated for a Globe but is a presenter tonight.

Hong Chau wore a black dress with a plunging neckline with skinny straps.

Chau is nominated for Downsizing.

He is nominated for his role in Big Little Lies.