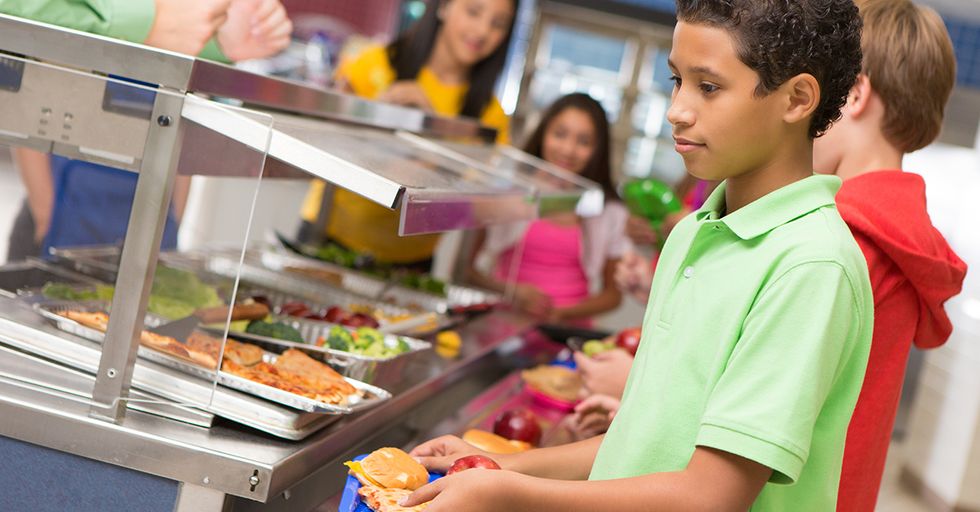 Big and successful businesses have so much potential to do good with their profits. But so often, those businesses don't do nearly enough. That's why this story is especially welcome news!

Greek yogurt company Chobani has announced its intentions to help out a whole lot of students. In Rhode Island, students were about to end up in a difficult position. Basically, their lack of money was about to cost them access to nutritious lunches. And if that sounds wrong to you...well, it should. It certainly sounded wrong to the CEO of Chobani, who quickly released a heartwarming message.

Check out the full story of these Rhode Island students, and see what Chobani is doing to help!

On top of everything else our country deals with, it's not always something we think about. But we really should!

You know, those outrageous amounts of money that hang over students like a weight long after they've graduated.

But there's a whole other drain on students.

And it's called lunch debt. For years, it's been a problem for school districts across the country.

So what goes into the problem?

Well, the National School Lunch Program has estimated that the average elementary school lunch costs $2.48, and the average in high school is $2.74.

But that's just the price for one day. When you factor in the accumulated total after months of school, those prices can be very draining on low-income families.

And there are other factors.

What if a family has multiple children? Then that price doubles, or triples; you get the idea. Point is, school lunches aren't affordable for every family.

It's pricey for schools, too.

There's a reimbursement system in place for schools, the federal school lunch program. But it reimbursements are based on what percentage of the school's students is actually paying the full price for meals, and what percentages are paying reduced rates or nothing at all.

So it doesn't cover everything.

And reimbursements can range from 30 cents to $3.54 for each student.

This basically refers to a practice in schools of stigmatizing or embarrassing students who can't pay for lunch, usually in hopes of getting those debts repaid quickly.

Lunch-shaming can mean anything from the school's cafeteria workers taking away a student's hot lunch when they can't pay, throwing it out and giving them a cold sandwich instead, to denying that student any food at all.

Which is as bad as it sounds.

Jenny Ramo is the executive director of New Mexico Appleseed, a nonprofit dedicated to eliminating poverty. "No one believes we do this to kids," she told CNN on the subject of lunch-shaming. "It's barbaric."

Some schools have banned the practice.

Numerous jurisdictions and even whole states, including Washington, D.C., have made the abusive practice of lunch-shaming illegal.

And they've established new precedents instead.

Where lunch-shaming is outlawed, schools must serve hot meals to students--whether they can pay or not.

And that's a good thing.

Because I think we can agree that kids have a right to having at least one solid meal per day provided by their school.

But it leaves schools with those debts.

And now the average amount of lunch debt per school is on the rise, and school districts are left to try and get rid of the debt as best they can.

Some have even crowd-funded.

Because that's where we're at: we can't go back to lunch-shaming, but some schools can only seem to clear the debt by crowdfunding campaigns and philanthropic donations.

And that's where we come to Warwick, Rhode Island.

Warwick Public School in Rhode Island triggered an outpouring of objections and criticism when it recently made an announcement regarding its lunches.

It has a LOT of debt.

In total, Warwick Public School is dealing with $77,000 of student debt over lunches.

The school announced that any students with unpaid balances on their lunch accounts would be getting a sunflower seed butter and jelly sandwich until their debts were paid.

Some parents began posting directly to the district's Facebook page. "Just give the kids lunch," one parent wrote. "We already lost a janitor, science teacher, don't have air conditioning, we can't spring for a chicken patty for a hungry kid? What if this is their only meal of the day?"

Including one man with the power to do something about it, AKA the founder and current CEO of Chobani, Hamdi Ulukaya.

Ulukaya released a statement on social media about the school's new policy. "As a parent, this news breaks my heart," he said.

Ulukaya had more to say.

Ulukaya felt he had a responsibility here.

"Business can and must do its part to solve the hunger crisis in America and do its part in the communities they call home," Ulukaya said.

To that end, Chobani is doing a few things.

Firstly, Ulukaya and Chobani will be paying off $47,650 of student debt, specifically that of Warwick's low-income students.

Cups and yogurt will be donated to the community in Warwick, in addition to paying off those debts.

as a parent, news of #WarwickPublicSchools breaks my heart. every child should have access to natural, nutritious &… https://t.co/J0d3jD9Ujn
— Hamdi Ulukaya (@Hamdi Ulukaya)1557431577.0

About 1,650 students owed money as of the school district's unpopular decision, but hopefully, many of those students will now be in the clear!

Chobani's announcement got another response.

Needless to say, people were much happier with this decision than with Warwick's initial lunch announcement.

If more businesses showed empathy like this, imagine what else we'd be able to accomplish.

It sure made a difference in Warwick.

In the wake of both Chobani's donation and the outpouring from Warwick's community, the school reversed its decision regarding school lunches. The cold sandwich policy is no more, although the school still needs to figure out how to feed its students without going into debt again. Keep on sharing this story with people who aren't aware of our schools' predicament--or just to spread a little light, courtesy of Chobani!