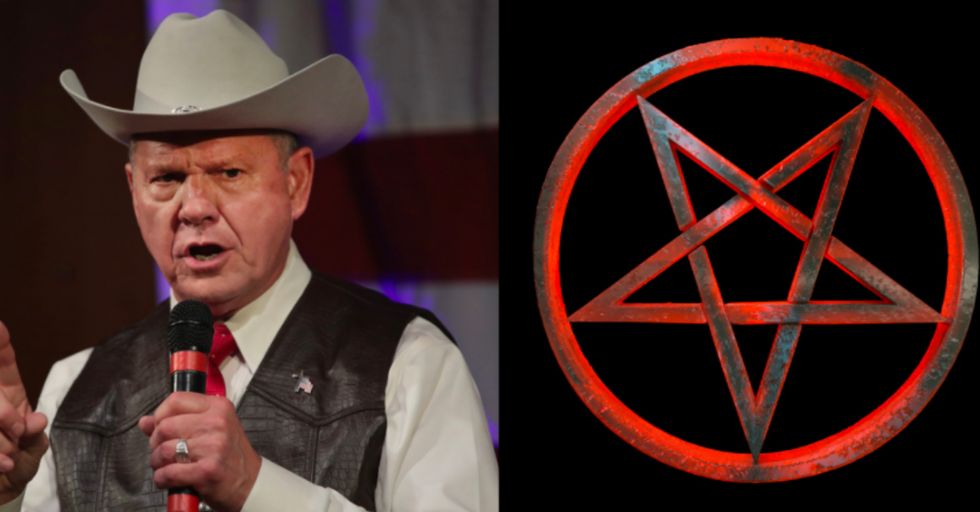 Roy Moore is a child molester, but he's also the current Republican nominee for the Alabama U.S. Senate seat. Following a bombshell report in the Washington Post detailing Moore's sexual relationship with a 14-year-old girl while he was in his 30s, many Republican politicians have come forward with weak and wavering statements sort of kind of not really condemning his actions. Some have said that he must remove himself from the race if the allegations turn out to be true, the allegations which are backed by 30 people and ever-growing.

The Washington Post report contained explicit details of the relationship Roy Moore conducted with Leigh Corfman in 1979 when she was 14 and he was 32.

It also included allegations from three other women who claimed that Moore pursued them when they were between the ages of 16 and 18 (when he much older than that). Since that article, a fifth accuser has come forward and claimed that Moore tried to rape her when she was 16 and he was twice her age. Though he denies knowing her, he did sign her high school yearbook. It's also come out that Moore was banned from a local shopping mall because he was known for bothering teenage girls.

On Sunday, Roy Moore's wife Kayla posted this letter on her Facebook. It's a "Pastor's Letter" that shows support for her husband and is accompanied by 50 "signatures" of local pastors who supposedly still support him even though he is definitely a child molester.

There are a few problems with this letter — it's a heavily edited version of the one that appears on Moore's campaign website, and several of the pastors listed have said that they did not give their permission to be included in this version of the letter. It also makes no mention of the accusations lodged against her husband. It seems that Kayla Moore has doctored a statement originally signed by 50 pastors into something that not all of them would agree to put their names on. Fishy.

However, the suspicious nature of Kayla Moore's letter didn't stop people from reporting that "50 pastors who think it's fine to abuse children sign a letter of support for Roy Moore."

This person seems to think that these pastors couldn't be good Christians at all. They must — if they support child molestation — be "priests in a satanic cult."

Well, the actual Church of Satan had something to say about that:

Of course, according to the 11 Satanic Rules of the Earth, child abuse is strictly forbidden. Can't quite say the same thing for Christians, who "have been abusing children for centuries" and actually covering it up to save face for priests. Food for thought from the Church of Satan.