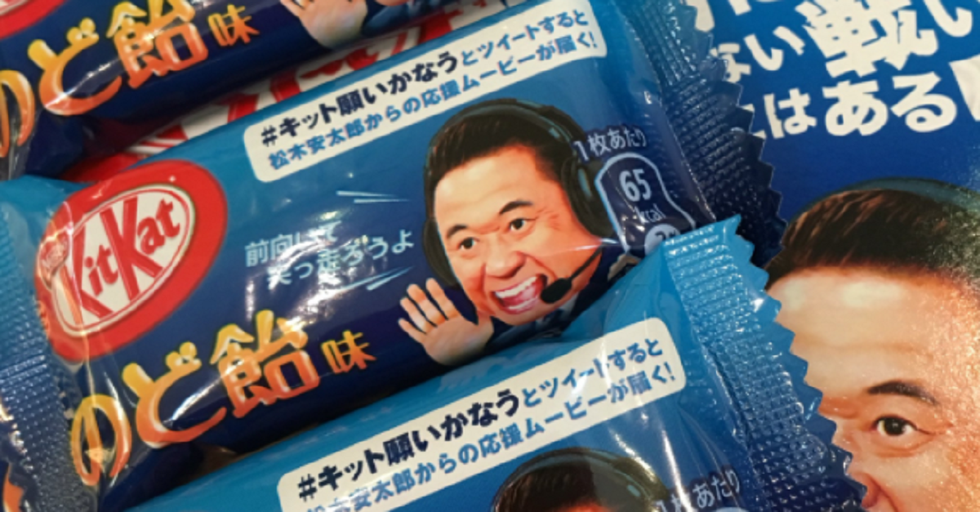 Japan is a country known for a lot of things, but in recent years, they've become renowned for their love of sweets. Often, companies will release products exclusively in Japan because they know that the Japanese market is usually a bit more accepting of "non-traditional" recipes — so to speak.

One brand that stands above the rest in their pursuit of non-traditional sweets is Kit Kat. They've dominated the weird Japanese candy market for a while now, and for good reason. Their latest flavor though may have gone a bit too far.

Apparently, each bar is made up of about 2.1% throat lozenge powder giving it a "fresh and invigorating taste." I have no explanation for the man on the package.

People are really excited about the cough drop-flavored Kit Kats for some reason.

It sounds really gross, but if it's only 2.1% cough drop then it probably just tastes like white chocolate. So... still gross!

Not all of the "weird" flavors sound bad though.

These citrus flavor Kit Kats don't sound terrible, though I'm not the biggest fan of orange and lemon.

I think some of these would do well in the States. Maybe not the cough drop one, but this sounds good.

But for every "normal" flavor, there is another bizarre one.

Sake flavored Kit Kats is pushing the envelope. I would think people would rather that their sake taste like Kit Kats though — not the other way around. It gets even weirder...

I present to you — wasabi flavored Kit Kats.

I like wasabi, and I like chocolate, but I don't think I would like wasabi flavored chocolate. I guess I thought the same about peppers and chocolate though, so don't knock it until you try it.

Some of these flavors look really good (ignoring the wasabi one.)

I don't even know what this is.

But it looks like some sort of delicious lavender pastry-flavored Kit Kat.

Japan even has "premium" Kit Kats.

Featuring such flavors as mint chocolate chip ice cream cake. Is anyone else's mouth watering or is that just me?

Even if you're a health nut, Kit Kat Japan has something for you.

If green tea flavored Kit Kats aren't your thing (because they certainly aren't mine) then don't be deterred. There are more "healthy" Kit Kat options for you.

And I think that other one is some kind of Sakura flower flavor. You'll have to pardon my ignorance seeing as I can't read Japanese.

Do you love cantaloupe and wish there was a candy bar that tasted like one?

Well then you're in luck! Kit Kat Japan dares to be bold enough to have a cantaloupe-flavored Kit Kat that will fill the void in your heart.

Earlier this year, Kit Kat Japan released their raspberry-flavored Kit Kats, and I am very jealous.

It seems like a 50/50 chance that these Japanese Kit Kat flavors are either delicious or horrible. There is no in between. These sound delicious though.

I need to order a bunch of these flavors after this. I can't go on knowing that there are all these Kit Kat flavors I haven't tried.

One flavor I can live without trying though...

Is whatever flavor that green stuff in the cup is supposed to be.