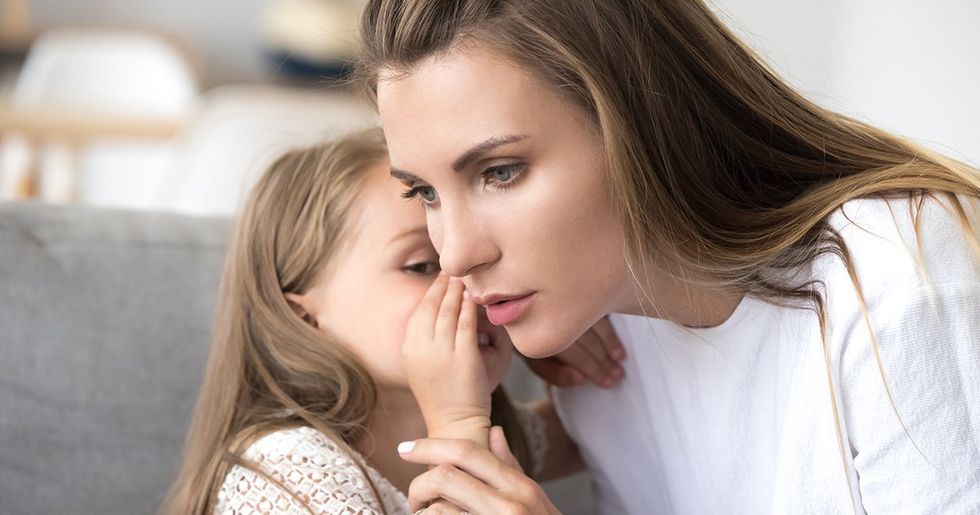 These Children Spooked the Adults in Their Lives With Creepy Statements

Have you ever seen The Omen? How about The Bad Seed? Joshua? Basically, there is no shortage of horror movies that center around evil demon children, and they exist for very good reason. Many children are creepy beyond belief. Even if they are not going around making their caretakers jump off of the roof of the house for them, there are many kids who seem to have some sort of weird connection to the paranormal world.

Kids are most likely to say these weird, super creepy things when they are young and definitely shouldn't know things about their deceased relatives they have never met or future plane crashes that have not happened yet, for example. I don't know what it is about kids, but they often know things they should not, and it is beyond insane when they come out and say these things with their creepy little kid voices.

Well, this GIF is going to haunt my nightmares.

People who interact with kids, what is the single weirdest/creepiest thing a kid has ever said to you? It's Saturda… https://t.co/f0bZGKqhzb
— ❄Mikki Kendall❄ (@❄Mikki Kendall❄)1517097611.0

Have you ever been the victim of a creepy kid saying weird things to you? The people who contributed to this Twitter thread certainly have.

Man in the red jacket

This is terrifying. I would have picked up that child and ran out of the cemetery as fast as possible. What happens when the man in the red jacket reaches you?

@Karnythia When my son was 3, he started singing a Polish nursery rhyme that my husband’s grandmother used to sing… https://t.co/JJaQF1vjBl
— Alison Skap (@Alison Skap)1517151565.0

But actually, what the heck?! There is no explanation for this other than the fact that his great-grandmother's ghost was singing to him.

This could just be the extensive imagination of a small child, or she could be the reincarnated version of a much older spirit!

Um, if this happened to me I would definitely be the one in need of therapy. Wow.

I really don't understand how kids seem to have a sixth sense about this kind of stuff. It's really cool! Creepy, but cool.

This is sweet in one of those completely terrifying kinds of ways. It's totally cool and totally creepy at the same time.

Listen, if you are swinging a kid on a swingset and the other swing starts moving out of nowhere, get out of there stat.

To be fair, cutting a person up into little pieces is probably the most efficient way to eat a person.

Oh man, this is terrifying! This person definitely interacted with the ghost of her older brother and I can't really get over that.

Maybe they were just her imaginary friends! That's probably it, right? Right?! Please let that be it.

The worst is when kids say really crazy, creepy things and then laugh. Why do they do that?

This is hilarious but so dark. Kids really do think of everything, don't they?

@Karnythia I had just bought my kid a white stuffed bunny. His response "when I was your dad I got you one just lik… https://t.co/OLaOfkthR5
— Rebecca Thompson (@Rebecca Thompson)1517168863.0

What? How? Is this kid the reincarnation of her dad or did her dead dad inhabit her kid's body? Either way, I'm scared.

Um, what? Is this kid like a future serial killer or something? It's scary that he tricked her into going into the basement.

I mean, I'm glad this was good news, but it's still creepy. I guess it could have been wishful thinking on the kid's part, but they said it with such conviction.

I'm glad this little girl thought the ghost in her room was really funny, but this would still creep me out so much.

@Karnythia When my twins were born one of them took longer to talk. When she did start it was in fluent Spanish. Wh… https://t.co/yNTo7WZKsP
— Sweet Jas Jones (@Sweet Jas Jones)1517109595.0

I've heard of things like this happening with people who wake up from comas and stuff, but this is the next level. So bizarre.

This was really sweet until the whole "I want to chop off your finger and carry it around with me all the time" thing.

@Karnythia 3yo alone in the tub, sitting to one side, starts getting visibly upset at nothing on her left side, “Te… https://t.co/w6VWijNYcI
— Carinavirus (@Carinavirus)1517158764.0

OK, this is crazy. It's one thing when kids have pleasant, positive interactions with spirits, but it's way worse when something is clearly bothering them!

One thing I do not look forward to when I have kids is finding them standing over my bed in the middle of the night.

Um, yeah, this baby is most certainly the spawn of Satan. Hate to break it to these parents.

This is so weird but also kind of comforting and cool, but also so weird.

This would drive me nuts. I'd probably stay inside the whole next day out of fear if a child said this to me. Terrifying.

Why do kids know information like this??!! It's so scary.

This is the craziest story of them all. How? How does this happen? This is like something out of True Detective.

At the ceiling? A guy was on the ceiling? This is so scary, definitely the beginning of a horror movie where everyone ends up dead at the end.

Um, is that a threat?! Share this with a parent you know!