'The Croc Heel' Is the Latest Footwear Trend | 22 Words 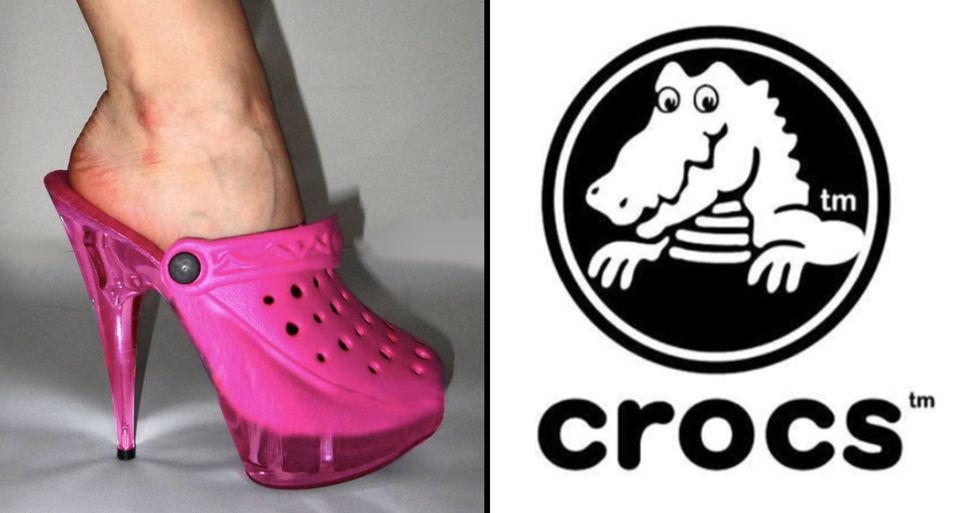 'The Croc Heel' Is the Latest Footwear Trend

Fashion has really taken a dramatic turn these days, with many companies opting for riskier pieces to grab people's attention. And let me tell you, it's working. The latest fashion trend to have us questioning our lives is none other than the Croc Heel. Yeah. The Croc Heel.

And it looks as bad as it sounds...

If it's not a deadly disease or questionable food items, it's absurd footwear.

Now we've been ravaged by ugly shoes before...

And we're still not quite over it.

It all started with Gucci releasing these bad boys...

The women's leather and mesh sandals.

For some reason, they combined 2 materials that don't belong together unless you're into that...

And then they decided to splash a bit of pastel pink and lilac on them and call them women's shoes. And don't even get me started on that chunky heel. It's footwear fit for a 90s Barbie Doll trying out the "explorer" look.

Of course, there's a men's version available too.

The intention is clear: Just change the colors to "manly" colors and hope for the best. Oh, Gucci.

And they didn't call it a day after that creation because then we got whiff of this:

The Flashtrek sneakers with removable crystals. Thank God they're removable.

But I don't think we'll be investing in these any time soon.

And it seems as though other designer companies also followed suit on the weird footwear.

Look at how Balmain decided to come through.

These are known as the "Grey high-top suede and mesh BBold sneakers with strap."

As if someone decided this was okay. It is not.

And don't even get me started on this abomination released by Philipp Plein.

Now Philipp Plein is known for his more outlandish style, with a lot of his creations working with a bit of sparkle, but this is something else altogether.

If you thought the Gucci sneakers were going to set you back, get a load of this...

These hellish babies have been slapped with a $12,747 price tag.

But what we didn't expect to see was crocs taking the lead.

I mean, crocs have always been a debatable choice, unless you're a nurse and you need a comfy pair of shoes to wear at work.

But it's something about the weird shaped holes at the front that make me uncomfortable.

Just look at them!

But over the years, the company has developed some pretty grotesque pieces.

But that hasn't stopped people from buying them, ever.

Just take a look at these ugly shoes:

I have always been a big fan of KFC, but that doesn't mean I need to advertise it with friend chicken shoes.

And these aren't much better:

But I would have appreciated them through my edgy emo phase back in high school, I'm sure.

But the latest release to get the internet talking is the Croc Heel.

Now, we've seen platform crocs before, you know those chunky, neon pink slip-ons? I always presumed they would be part of the uniform for those of us entering the gates of hell, but now, I have a feeling it will be the Croc Heel.

I know how it sounds, but the actual heel is not made of a spongy, rubber material.

It gets its name from the fact that it boasts a similar style to the original round-toed croc.

Though it was originally presented to the world back in 2018, the Croc Heel is only getting the recognition it deserves.

Designed by the one and only Gab Bois, the statement piece really made people feel more than uncomfortable. But that doesn't take away from how fascinating the entire thing was.

I should have known they were behind it all and the reaction of fans from all around the world said it all with mixed reviews flying in left, right, and center.

What do you think? Is this something you can imagine turning up to a dinner party wearing?

For those of you that are wondering, they aren't currently available to buy...

But it's 2020, of course, anything is possible. Keep scrolling to see what other fashion trends disgusted the hell out of us last year...