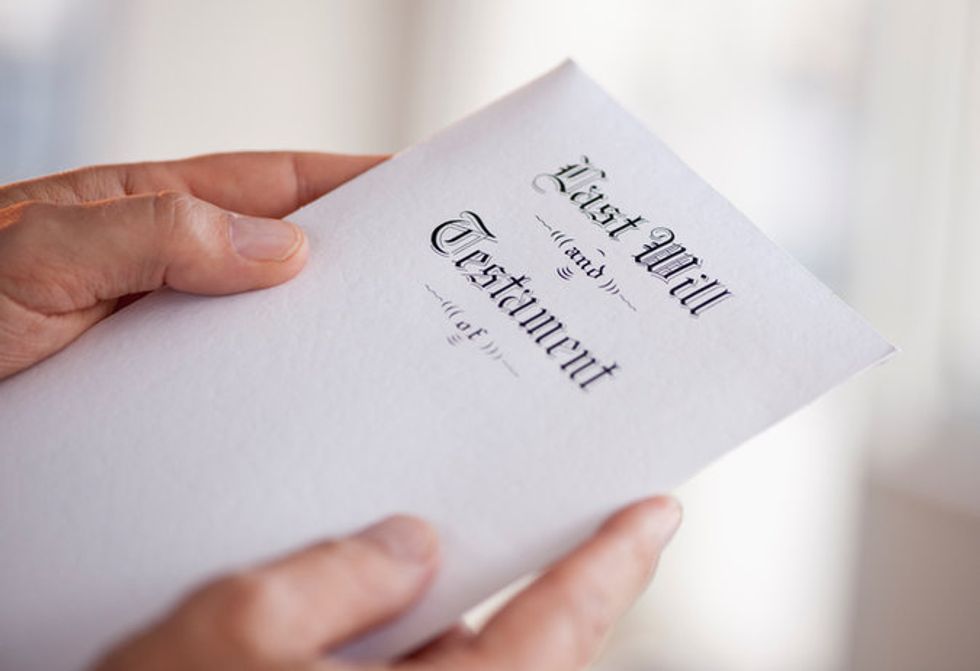 The Deceased Got the Last Laugh With These Savagely Spiteful Wills

Mandy Kennedy
However, sometimes the deceased have the foresight to enact some pretty crazy revenge in their wills and estates. You’ll be amazed at what some people dream up. Oh, and don’t worry: there are some heartwarming ones in here, too.

There's a lot of emotions running high from the death of a loved one. Unfortunately, the stress and struggle over the departeds' estates can only add to the tension and fighting.

However, sometimes the deceased have the foresight to enact some pretty crazy revenge in their wills and estates. You'll be amazed at what some people dream up. Oh, and don't worry: there are some heartwarming ones in here, too.

Sometimes, the will just contains a few choice words for the survivors.

“‘To my wife I leave her lover and the knowledge that I was never the fool she thought me. To my son I leave the pleasure of working for a living – for 25 years, he thought the pleasure was all mine.’ Best dis ever. Was in my Wills & Trusts book in law school as an example of people talking s–t in their wills." via DoctorDanDrangus

“A friend of mine was adopted at birth. When her mom died, the will gave half the estate to her ‘two natural daughters.’ My friend got nothing." via Chowderhead1

“One client left a specific gift of $10K to one son, and left him out of the per stripes division (every family member gets an equal share of the wealth) of the residual estate, which was sizeable at the time the will was drafted. This was intended as a serious disinheritance, which he apparently talked about all the time to make the disfavored son feel bad. However, by the time he died he had a serious reversal of fortune and his estate was about $10K, so he effectively disinherited the ‘good’ children and left the black sheep everything. The bad kid appeared very poor, compared to the others, and the look of grateful surprise on the poor kids face was almost as priceless as the shock on the others who thought they were getting rich." via AngryFloyd

Not vengeful, but someone is going to need to find an illegal substance!

“I am not a lawyer but I am deputy public administrator and we find Wills often. We deal with individuals who died without any known family or the family is estranged and we have to locate them. One of the Wills I read said 'NO F*CKING LAWYERS' in the text and another one stated 'I would like crack powder stuffed in my ears and cremated.'" via thorface

“Rich old lady leaves her entire sizable estate in a trust for the care and maintenance of her dog, as long as the dog shall live. On the dog’s death, the trust paid out in full to the son. Apparently the son had Rover put down the day after the funeral and presented a demand to the trustee the very next day for the trust payout. She should have seen that one coming." via AngryFloyd

Yikes. That guy had some messed up priorities.

“I work for a brokerage firm and I often deal with account beneficiaries. We had a client leave his entire account to a stripper. After the client died, his wife discovered her husband had left his life savings to Jane “Sparkles" Smith. She was pissed. REALLY pissed." via cupanope

At least they weren't strapped for cash...

“When I was a clerk in law school at the state court of appeals the adult children of a rich woman tried to invalidate the will. Basically the woman was worth about 8 million dollars and all the children were working professionals earning 6 or 7 figures. Well the woman had used the same hair dresser for multiple years and left a considerable amount in a trust for the hair dresser’s children’s education. The remainder of the estate was given to different charities. Basically the kids were mad they didn’t get a cut." via PhantomTireBuyer

Was he trying to give her heart disease?

“An ancestor of mine in the rural UK in the 1700s died and left his farm and everything to his nephew (no children), with his surviving wife only getting ‘the second best bed’ and a provision for her to receive 3lbs of butter per week for the rest of her life. We thought this was incredibly mean, but we wonder whether this butter was meant as an income, I mean who can eat 3lbs of butter?!" via pissyperfectionist

I wonder what the outcome was!

“I used to work for an accountant and we used to make wills as well. An old man probably around 70 left all his money to his mistress while his wife only got the gold fish. I had to tell him that if his wife contested it she would most definitely win, he said he didn’t care." via sofa_king_adorable

Whoa. This needs to be a movie.

“‘To my daughter Anne, who created my beautiful granddaughter Jane, and her dear fourth husband John, who laid hands on my Jane, I leave one dollar you money grubbing bastards. To Jane I leave all of my monetary assets, save $5000 and my best gun which I leave to my son Bill, on the condition that he beats John bloody during the time between my funeral and my burial. Jane, bail your uncle out of jail, please.’ Other than names, this is the exact wording of a great uncle’s will (part of it anyway. At age nine Jane told her mother that John had molested her and her mother told her she deserved it for being a slut. So great uncle took Jane in and raised her, and his two kids got exactly what it says. Bill got full custody of Jane when his father died and he put every penny of her money into a trust fund to mature when she was 25 because he felt like his sister would try to get the money, he was right. And in case anyone wondered, yes Bill got his five grand. He didn’t get arrested though because John had a warrant on him so they didn’t dare call the cops. Bill did kindly inform the police of his whereabouts a few weeks later." via UndeadKitten

Sounds like this guy was waiting until his own funeral for the families to meet.

“My estate planning professor told us about a guy who had two families, neither of which knew about the other until it was time to read the will. This wasn’t like a love child/mistress type scenario, both were nuclear multi-kid families. Both families showed up for what had to be one of the most awkward will readings in history. I don’t really know how he pulled it off other than that he was away on ‘business’ frequently." via PrivateEyesWatchingU

Thanks for leaving us a totally tedious chore!

“We had a client itemize his rock collection in his will, including directions that certain rocks be deposited in certain rivers across Canada." via anonymous

Here's a good deed to make up for the many bad ones.

“No lawyer here but I had to share. A woman came in after her mother’s funeral with some correspondence from the company I work for (Insurance). She was worried there was a bill she needed to pay and was coming to tell us her mom had died. She just looked SO tired, and we got to talking while I looked up the policy to close it out. She shared that in the last few years her mom had slipped into dementia and she singlehandedly took care of her…how she missed her but just was run ragged and she hadn’t taken a vacation in forever. I realized what she had was not a health policy, it was a life insurance policy naming the daughter as the beneficiary for about 50K. I told her and she just started crying..it made me cry and I got up and hugged her and sort of just held her while she cried. She pulled away and said…"I have no idea what she left that for, everything’s been paid for." I said, “This might be her telling you to go on that vacation and relax." It was so touching, and she had no idea that the policy existed."via LadyTarTar

“My father-in-law was an accountant for some rather wealthy people. One of them was asking him to assist with writing up his will worth millions. The final addition he suggested was that if the children contested it, they get nothing. They contested it, for years!" via dougj182

Kinda sweet, but he could have told her while he was alive!

“We had a client who was a widowed farmer who owned several heavy equipment (Caterpillar trucks, etc). He had two sons who were already working with him at the farm and a daughter who was working in the city. He willed the heavy equipment to the daughter, when asked why since these equipment were essential to the farm. He said that the farm was to go his kids equally but his girl needed to know he always wanted her to join their venture and dispel her notions of alienation because she was a girl." via nerdychick19

Wow. This is twisted request.

“In my trusts & estates class in law school, we read a case about a man who left everything to his wife, but only if she got his body stuffed and left it on the living room couch forever. Luckily for her, the court invalidated that part of the husband’s will. If I recall correctly, part of the reasoning was that it would make it impossible for her to date/remarry if she had her husband’s creepy dead body glaring at anyone who came to see her." via Luna_Lovelace

“Years ago, worked in a retirement community. Older man we knew was gay developed a late in life relationship and moved into the community with his gay lover. He was a Korea vet, multiple honors, a wall of medals. He was also a bit of an asshole most days, but he had moments over a meal, his stories were fantastic. His children over three years never once visited him. He had a heart attack and knew he was going to die. His children showed up but demanded his lover leave for visits. In his will he left everything to his lover and his lover’s one child from a former marriage. He wrote a long note about his kids hypocrisy of not visiting, and their attitudes toward his lover. He left each of his two kids a pail of coal ash, to be deducted from his estate, had his estate pay for his lovers plot to be next to him and his wife. It was frankly awesome hearing his kids blow up about it." via jpebcac

What? That's awesome AND confusing.

“My grandfather hated his neighbor. They lived next to each other for 20+ years. I remember well my grandfather raging at every opportunity about this guy. We never saw them speak to each other. In Grandpa’s will he left the guy $10k, a car and golf clubs. We were dumbstruck. Turns out they were good buddies from the Army. When they coincidently bought homes next to each other they decided to play a long scam with both their families. They actually played golf together 2-3x per week and had a monthly poker game for years." via Kooknboo