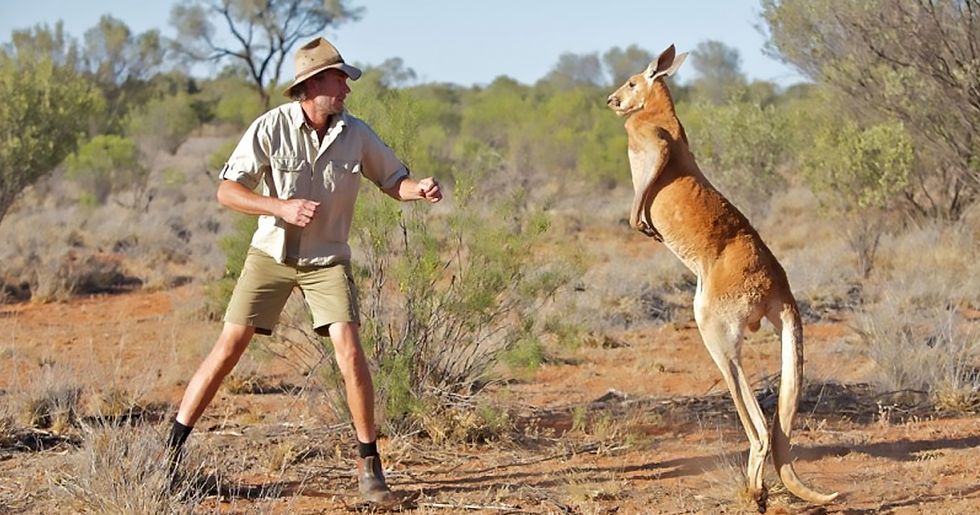 The Definitive List of Things You Should Never Ever Mess With

Today, we're all toddlers being told by folks on the internet not to shove our fingers into wall outlets. There's no doubt that this world is full of things that are trying to kill us at every waking moment. Snakes, falling pianos, in-laws. The list goes on.

Well, the fine folks over on Reddit thought they'd do their best to compile a list of things you should definitely not... erm, mess with. And we're sharing it with you! Because that's what we do -- find things on the internet that are terrifying, and talk about them to make that fear slightly less scary. Sounds useful, right?

If you come across any of these things in your everyday life, just turn and run the other way, because nothing good could ever happen. So break out the first aid kit, and get your emergency contacts in order, because here are our (and Reddit's) list of things you should never ever mess with.

For our first tip, we're going to the outback.

But no, this time we're talking about kangaroos.

As an Aussie boy I can quite confidently say never fuck with a kangaroo. These mofo's are fierce and won't take shit from you. -infinityking1

This is a good one for literally every day of your life.

The people who handle your food. -GoingForwardIn2018

Look for spit before eating if you're going to be a jerk.

Talking to you, Aunt Becky. Stop complaining and just enjoy...

How about some transportation warnings?

But what about trains?

They can weigh anywhere from a few hundred to tens of thousands of tons, they can hit speeds of 70 mph, or much faster if it's a high speed line, and it takes up to a mile for one to stop under emergency braking. You know, just pretend that they have no brakes at all, because all they'll do is soften the blow. Obey the flashing lights people. See Tracks, Think Train. -whatthefunk05

This next one is just... obvious.

Electricity -RadixLecti72 Can you maybe expand on that? No?

Anyone ever heard of thalassophobia?

And no, it's not a fear of something mysterious called a thalass.

It's a fear of the ocean.

Up next, we turn to music.

Because if there's one thing you shouldn't mess with, it's... sound?

This next one is a favorite of the President.

It can't be that bad, right?

I come from a high drug area and got out early. Recently meet up with some old friends I hadn't seen in 18 years... one girl had 4 teeth in total. She looked older than my mother. Her life... it was so bad. -squeaktoy_la

There are more stories too.

How about something slightly less depressing? Like a hornet's nest!

This comment was a journey. I have about three on the side of the house. I figure they need to go down somehow right? I have a pole that reaches them and I have a plan. I can't just let them keep building!! Edit: I took the pole to them this morning while they were sleepy. There's one large, one medium and about four small nests. I got the large one down, wacked it a bunch and ran back inside. 5 min later: went back out to wack it some more. Put on glasses. The ground was covered in hornet/wasps. Realized I am an unprepared fool and didn't have shoes on, ran inside. Update! Found the wasp spray!!! Sprayed them all. Will check on them this evening after work. Final update: I killed them. I killed them all. They're dead, every single one of them. And not just the men, but the women and the children, too. They're like animals, and I slaughtered them like animals. I HATE THEM. -ZombieBoobies

This is my nightmare.

Okay, how about something a little more... nightmarish?

As a chemist, I would never [mess] with dimethylmercury. -SkyFaerie

-disgruntledgrumpkin That can't be that bad, right? I mean my sister was attacked by a goose when she was a kid, but that was pretty funny.

Wait, maybe I was wrong.

Cobra Chicken is the name of my new heavy metal band and you can't stop me.

I found the ultimate warning.

I tried this with an ex after 6 years of being apart. I thought maybe they'd have matured and I figured I'd test the waters again to see if they've changed, had new goals and ambitions or just got it together in general. Instead, they just got so, so much worse and didn't grow up a bit from with the same toxic personality from when we last were together. Pass. Generally, it's pretty safe to assume once a romantic/sexual relationship is over, it's over. Take it reallllll slow if you try again. -Throwitawaynow187413

Yeah, people are the scariest of all.

The stories are ridiculous.

"So I did what any man would do, I protected her." Okay, buddy.

They’ll make fun of you, but in an accurate way.

-2Old2BeADuckling That's just way too true. What things do you generally not mess with? Let us know in the comments are we'll share our worst stories.