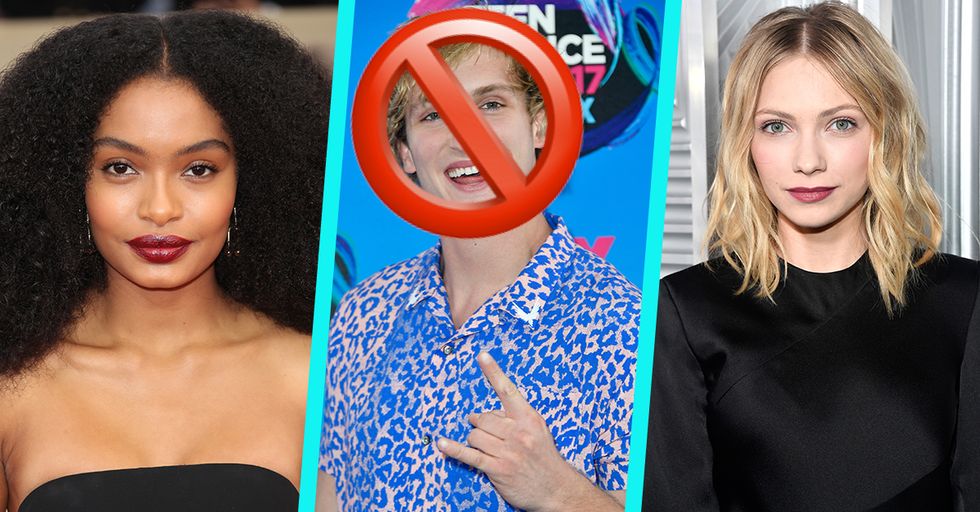 The Era of Logan Paul Is Over, and the Women of Young Hollywood Have Arrived

I'm not making a unique statement when I say that Logan Paul is an idiot. And I don't really want to waste valuable space on the internet adding to the conversation of what an idiot he is because it's been said and it's very much known. In my opinion, the best thing we can all do is stop talking about Logan Paul, and stop giving him any sort of platform/attention.

The only thing I really want to say about Logan Paul is that he offers a stark contrast to the young women currently taking over Hollywood. So, instead of adding my voice to the "LOGAN PAUL SUCKS" conversation (and he sucks very much), I wanted to take a moment and highlight young women who inspire me. They all happen to be 21 and younger.

Which is... bonkers. And crazy. And makes me think "What the hell am I doing with my life?" But also makes me so thankful and inspired, especially during a time when everything sort of feels helpless. While idiots like Paul continue to use their platform to melt the minds of small children, all of these women are using those same platforms to quite literally make the world we live in a better place.

When I found out Yara Shahidi was only 17, I nearly fell out of my chair. When I was 17, I was in love with a guy in the drumline named Todd who was obsessed with Incubus. I spent most of my time looking up the lyrics to Incubus songs so I could woo Todd and we could fall in love. Yara Shahidi, on the other hand, is getting a college recommendation letter from Michelle Obama and leading global conversations about the importance of education for women.

Oh, and did I mention how she's doing all of this while being a TV star?

Shahidi stars as Anthony Anderson and Tracee Ellis Ross' teenager daughter on the hit ABC sitcom, Black-ish. She then got her own spin-off, Grown-ish, that premiered on ABC's Freeform earlier this year.

Shahidi is an example of someone who has come upon a door that's cracked open, and then stomp-kicked the whole thing down.

"My trouble with defining activism is that it tells you what it’s not and activism is everything," she said on being an activist. "For me, it comes through art: being intentional with the roles I choose, backing projects that are socially aware, or trying to push forward a progressive conversation and public speaking is another method."

I first started seeing Zendaya pop up when I was perusing Tumblr. Someone would always be reblogging her flawless fashion as she strutted along red carpets. Then, once she was cast in Marvel's Spider-Man: Homecoming, I began to pay attention and shortly thereafter I became a full-fledged Zendaya fan/stan/whatever the children are saying on Twitter nowadays.

My impulse is to say something like, "ZENDAYA IS EVERYTHING" and while that may sound trite, I really do mean it.

Yara Shahidi actually interviewed Zendaya for Glamour magazine in October of 2017. I remember reading the interview and feeling stunned and inspired. Their conversation was incredibly powerful, moving, and intelligent. Zendaya is one of the youngest producers Disney's ever had. Her willingness to speak up about things she cares about set her apart from most actresses her age (she turned 21 in September). "Here’s the thing—I can genuinely say that I’m not the same person I was a year ago," Zendaya said in the Glamour interview. "As my social platforms grew, I realized that my voice was so much more important than I had originally thought. I think if every young person understood the power of their voice, things would be a lot different. And it’s becoming more popular to be outspoken."

Tavi Gevinson has been an inspiration since she was 12, when she ran her own fashion blog called Style Rookie. When I was 12, I was deep in the throes of Newsies fanfiction, getting into fights with anyone who dare tell me my stories were trash. Gevinson, at 12, was flouring in the blogosphere. Out of Style Rookie grew Rookie Mag, a publication for teenage girls where Gevinson serves as the editor-in-chief.

She is amazing, to say the least. To use the word "amazing" sounds cliche, but I can't really think of anything else.

I like following Gevinson on social media because every time she posts something I feel smarter for reading and consuming whatever she uploads. She's given TED talks, she's starred on Broadway, she's interviewed Malala Yousafzai (a piece that is an absolute must-read). But what I love most about Gevinson is that she's given a platform for teenage girls to express themselves. She's fostered a beautiful community of young women who need one another; who empower one another to speak loudly when so many people tell them to quiet down.

When I realized that Amandla Stenberg is the actress who plays Rue in The Hunger Games, I was shook. Ever since that big screen debut, Stenberg carved a place for herself in Hollywood. Along with Zendaya, she appeared in Beyoncé's visual album, Lemonade, as well as played romantic lead in the young adult flick, Everything, Everything.

Next up, Stenberg will play the lead role in Angie Thomas' best-selling novel, "The Hate U Give."

As Vogue magazine put it, Stenberg is a "voice for the future." For a high school project, Stenberg made a video called, "Don't Cash Crop My Cornrows" and it subsequently went viral. At the end of the video, Stenberg asks,"What would America be like if we loved black people as much as we love black culture?" She also gave a talk for Oprah's SuperSoul Session, and the title of Stenberg's piece was called "My Authenticity Is My Activism."

For instance...she's producing and starring in her own movie.

The Hollywood Reporter  broke the news that Martin will executive produce and star in her own feature, Little. Not only that, but she also came up with the idea for the script.

She's also active on social media, posting about causes like #TimesUp and standing in solidarity with the cause. If this is what she's doing at 13, can you imagine what she'll do in the years to come? She's a young queen that needs to be on everyone's radar, because the world is not ready for her.

Rowan Blanchard can't even vote in a presidential election, and yet she's more outspoken and passionate about politics and the state of our world than most adults I know. Blanchard came onto the scene when she won the coveted role of Cory and Topanga's daughter on Disney's Girl Meets World, but she's known for so much more than that.

For instance, being an intersectional feminist and constantly using her Instagram as a platform for societal and political change.

She wrote a Tumblr post about the importance of being an intersectional feminist after a fan asked her what her feelings are regarding the term "white feminist." May I remind you that she's only 16? At the 2017 Women's March, Blanchard took the podium to address the crowds. "We have been forced to know how to fight since day one," she said to the crowd of more than 700,000 people in downtown Los Angeles.  "This is our advantage." Blanchard also has strong feelings about the current presidential administration: "It’s not that things all of a sudden changed on January 20," she told NYLON. "If Hillary Clinton had won, things would have obviously been much better, but now that we have somebody who’s the pinnacle of racism, sexism, xenophobia—all of this—we’re able to have conversations about where that started, and it was a long, long time ago." Speak. On. It.

Blanchard has knocked down the stereotype of what it means to be a "Disney Star."

Her voice, like the other young women in her company, is vital.  Here's the thing: these young women are all in the spotlight. They have thousands (and in some cases, millions) of Twitter and Instagram followers. Young people consume every word they put out into the ever-changing internet. They're on the covers of magazines, they're in our social feeds; they're everywhere. Which is how they're going to change the world. Every single one of them is grabbing hold of their moment; they're living in it, and they're not only making a path for themselves, but for other young women. The world is big enough for all of their success, and for all the success of the young girls that they inspire. The future is female, and these ladies are proof.