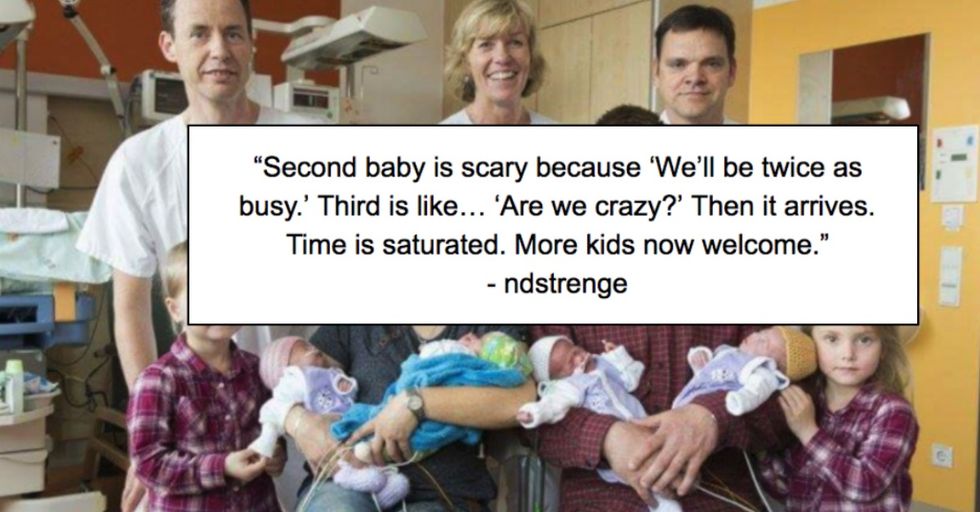 The Expression on These Parents' Faces After Birthing Quadruplets Is Hilarious

These German parents of twins were in for quite a surprise when they learned that they would be having quadruplets. Even though ultrasounds told them what was on the way, the photos show that the gravity of the situation hadn't quite hit them until the quadruplets were born.

The dad, especially, looked like this may have been the first time he thought the whole situation through.

The parents were both 28 years old when they learned that they would be having quadruplets.

They already had two girls, which were a set of four-year-old twins. The young couple had hormone treatments before both sets of kids, so the quadruplets were welcome but not planned, according to Leipziger Volkszeitung.

Both parents grew up with siblings.

The dad had four siblings and the mom had two siblings growing up. The dad said, "But if you have several children yourself, it's something else."

In May of 2017, Juliane Stejskal had a cesarian section during the 31st week of her pregnancy.

Juliane and all four of the newborns were healthy after the procedure. She told Leipziger Volkszeitung that she was under partial anesthesia during the procedure, but that she remembers all four babies started screaming at the same time. This is the face of a woman who is relieved that everything went smoothly after she brought four living beings into the world on the same day. Talk about a super mom!

Before we look at the dad's expression, the faces of the older twins are worth noting as well.

Reddit user blucif wrote, "The older twins...both faces...priceless." They look tentatively excited and somehow unamused at the same time. New siblings are fun if they'll play with you, but very annoying if they take all the attention of mom and dad.

There's no going back now.

This is all of their lives now. They're already sharing a birthday and now they have to share a house with four squirmy little brothers and sisters. But of all the expressions, the dad's was by far the best.

He looks like he just realized that he is in charge of six little beings, four of which can't really do anything on their own yet and two of which can do just enough to keep him running circles around the house.

This guy's expression is just so, so real, folks. Can you even imagine having two sets of multiples that close in age?

The people of Reddit sympathized with the dad's reaction.

Reddit user njb42 said, "Having twins and then quads means they likely went the IVF route. If they did, they knew all along this was a risk (or a benefit, depending on how you look at it). Most IVF clinics will ask you to decide on an upper limit, e.g. if we prepare 4 embryos and 3 implant, do we want to keep all 3 or perform selective reduction? They knew exactly how many they were having. That said, the dad certainly looks a bit shell-shocked."

You may have to see the entire picture to get the full effect.

Reddit user FlyingRatDog was rightfully sympathetic to the mom as well. "Tbh, the mom's smiling, but to me she looks tired. Dad's definitely got a fml face though," they wrote.

Who wouldn't be even a little bit scared in their shoes?!

Reddit user ZEF2DEF666  said, "Pretty sure I would be making the same face lol. Just this whole 'single baby' business is a lot to plan for!" Yup, we'd be making that face after before, during, and after the birth of baby number one, much less baby number SIX in four years.

But, for some people, this photo was nothing but a warning about the realities of parenthood.

"Cats. Cats are the way forward," wrote Reddit user Edabite. Another said, "I'd consider having magical children some day, if time allows. My magical clock IS ticking, though." Shock aside, the parents of the quadruplets are doing well and excited for the kids to meet their many aunts and uncles who are eager to see the newborns. Tobias will be taking time off of work so that he can help his wife with their six children. How many kids are in your family?