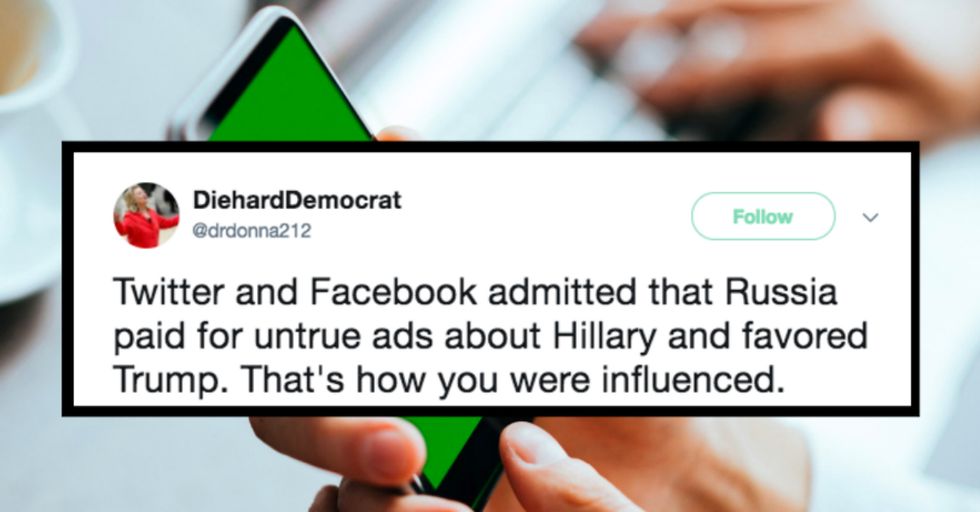 Two months ago, Facebook came forward to admit it had been paid to promote 3,000 extremely divisive political ads during the 2016 election season that were likely posted by a Russia-backed organization. According to Facebook, Russia spent approximately $100,000 to boost these ads, which spread extremist political views and polarizing messages about hot-button social issues. Now, we're finally able to see some of the ads themselves. Warning: Your estranged, extremist uncle may have shared one or two of these.

About a dozen of these ads were released on Wednesday, November 1 by the House Intelligence Committee during a hearing with lawyers from Facebook, Google, and Twitter.

In addition to the ads, the panel also released 65 pages of Twitter accounts linked to Russia that have been taken down. Some of these accounts were made to look like legitimate news organizations (though they definitely were not), and several of these accounts had been retweeted by Trump campaign officials and Donald Trump himself.

According to ABC News, California Congressman Adam Schiff said that the Russian campaigned was designed "to further a broader Kremlin objective — sowing discord in the U.S. by inflaming passions on a range of divisive issues."

And if you look at the ads themselves, that certainly seems to be the case. Representatives from Facebook, Twitter, and Google said that "most of the ads focused on divisive social issues rather than specific candidates in the presidential election," but as you see in the above screenshot, that wasn't always the case.

Facebook said that many of the 3,000 ads were promoted by 470 "inauthentic" accounts and pages that have now been suspended.

In addition to the $100,000 spent on those 3,000 ads, another $50,000 went toward 2,200 other "potentially politically related" ads and "might have been bought by Russians in potential violation of U.S. election law," according to HuffPost.

Topics of the ads ranged from the Black Lives Matter movement to illegal immigration to defense of the second amendment.

The lawyers for Google, Facebook, and Twitter did admit that "efforts to combat Russian activity on their platforms during the election were insufficient and said that they still don't have a full picture of the Russian online influence effort," according to ABC News.

Reassuring, isn't it? Senator Dianne Feinstein minced no words when she addressed the panel: "I don't think you get it. What we're talking about is the beginning of cyberwarfare."

That's no small number. The Internet Research Agency, a Russian "troll farm," was found to be linked to 2,752 Twitter accounts, two Google accounts that spent $4,700 on Google ads, and 18 YouTube channels.

No s***, Sherlock. In one example brought to light by Senator Richard Burr, Russians "masqueraded on Facebook as both a pro-Islam 'United Muslims of America' group and an anti-Islam 'Heart of Texas' group, then scheduled opposing rallies on the same day in the same area of Houston." Both groups attended and conflict came to a head in the streets of Texas. This goes way beyond causing dissent.