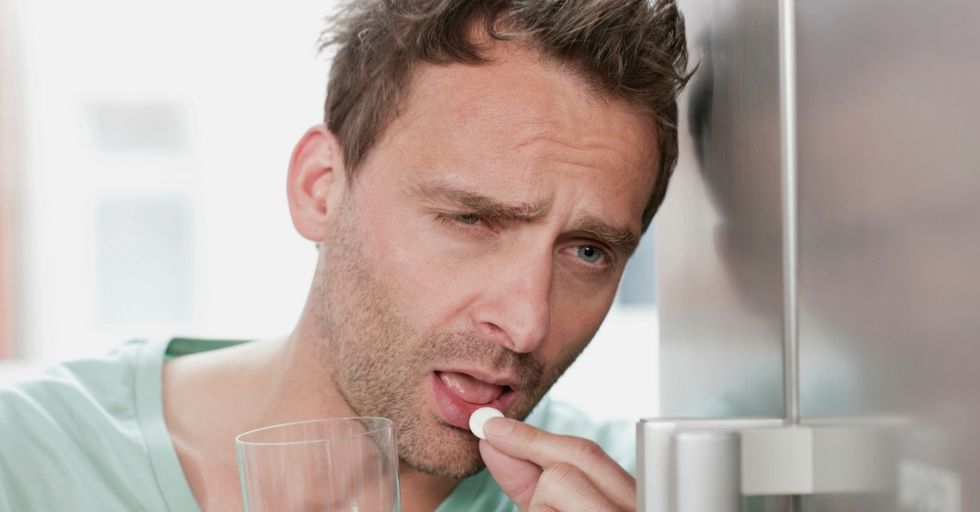 The FDA Has Finally Approved a Hangover Cure — but Does It Work?

Ah, the dreaded hangover. It's happened to everyone. You go out for an evening of fun with friends, the drinks start to add up and before you know it, the room starts to spin. You realize you should have stopped before that last margarita, but it's too late, and you can tell that you'll be paying for it in the morning.

But what if you woke up feeling on top of the world the next day instead of on the verge of death? A newly released drug may be able to give us just that.

This is not a drill, people.

Although people react to over-drinking differently, we’ve probably all experienced a hangover at one point in our lives.

And they’re not fun. While the length of time a hangover lasts for can vary from person to person, most experience relatively the same symptoms: a headache, nausea, extreme fatigue, and sometimes vomiting.

The cure for the common hangover has been sought for centuries.

Many people claim to have their own unique home remedies that will instantly cure a hangover. Drinking copious amounts of water tends to be a common one, which makes sense since part of what causes a hangover is dehydration. But sometimes water alone doesn't cut it.

Certain types of healthy elixirs have also been toted as magical hangover cures.

A healthy smoothie packed with spinach, honey and Greek yogurt has been reported to help. Greasy foods are also a common choice, which are supposed to "soak up" the alcohol in your system. Sadly for us, and our hash browns, this theory has been debunked, and it turns out it may even make you feel worse.

Ever tried ‘hair of the dog’?

It’s a method of fighting a hangover that basically just involves drinking a little bit of alcohol, or “the hair of the dog that bit you". The theory is that a hangover is caused from alcohol withdrawal, so consuming a small amount of it will reverse the symptoms. But does it actually work?

According to Cosmo, no.

It does not. Once again, this method will probably just make you feel worse. But the good news is that, thanks to science, we may have found a cure that will allow us to drink the night away without worrying about being bedridden for the next 24 hours. Keep reading to find out what it is!

It's called Morning Recovery, and it’s been approved by the FDA.

So just how magical is this new drug? On Morning Recovery’s website, three real people explain that it's pretty darn magical. “Being groggy is something that I know all too well," said Mike from Facebook. “I love to have a good time, but have always paid for it the next day. After drinking Morning Recovery, I woke up the next morning with no haze. I was mentally sharp and was ready to take on the day."

A man named Steve, described as being “from Pinterest", shared his experience as well.

“The morning after a big celebration for an old friend coming back into town, I tried MorningRecovery," Steve said. “I thought I was in for a rough day, but just an hour after I got up, I was feeling energetic and normal!" He didn't elaborate on how he felt immediately upon waking up, so that's something to consider.

Sair from Tesla talked about how she was a disbeliever of the new miracle drug at first before she tried it.

It turns out it's not so secret.

All of the ingrediets are listed on the website. According to morningrecoverydrink.com, Morning Recovery "is centered around Hovenia Dulcis, an Oriental raisin tree. It contains Dihydromyricetin (DHM) which has anti-hepatotoxic properties to help detoxify our body after alcohol poisoning."

"Morning Recovery is formulated to boost your body's natural response to alcohol. Drink it before going to bed and wake up feeling great."

Other active ingredients include milk thistle, taurine, electrolytes, vitamin B complex, and prickly pear extract. Morning Recovery is described on the website as "your liver's new best friend." We've gotta admit, that sounds pretty amazing. But how and when do you drink it?

Morning recovery comes in 3.4 fluid ounce bottles, and you can buy a six pack for $27.

To use it effectively, you have to drink one bottle after your last drink of the night. Then, simply go to sleep and wake up feeling energized, healthy, and not on the verge of death. It's that easy!

While we're still a bit skeptical about the true effectiveness of this new miracle drug, it is an exciting prospect.

While it most likely wouldn't be able to reverse the effects of copious amounts of drinking, it might be able to make the morning after a night of socializing and moderate enjoyment just a bit better. And that's something we can all toast to.