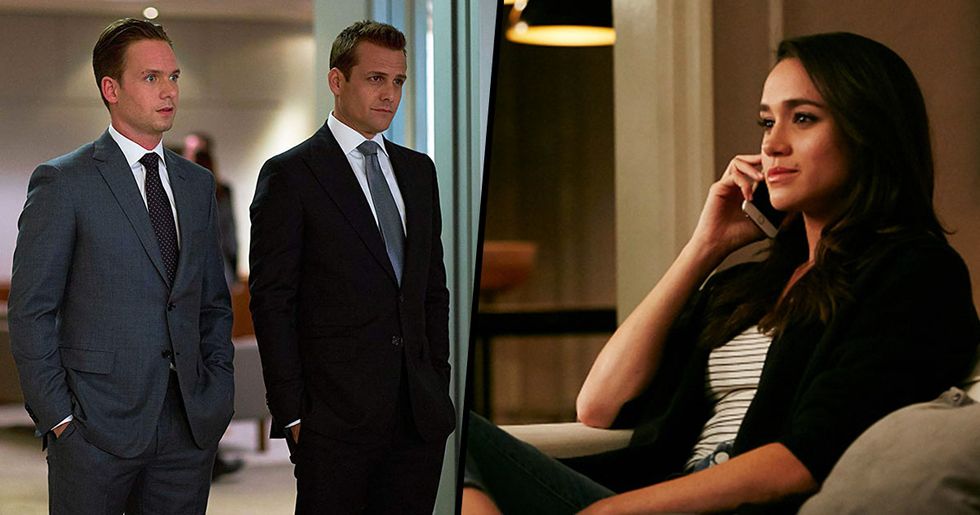 Legal drama, Suits, has become a binge-watching classic over the years as well as a fan favorite among law students across the world.

Set in a fictional law firm in New York City, the show, which first premiered in 2011, has garnered a huge fan base But, sadly, 8 years on from its debut, the series has finally come to an end.

And, amongst all the emotional goodbyes from cast members on their social media accounts, fans couldn't help but notice one thing about the finale - the quite blatant joke about Prince Harry in the last ever episode...

The legal drama premiered on June 23, 2011, on USA Network, and quickly became a fan favorite.

It's the network's longest-running original series.

The show follows intelligent college dropout, Mike Ross, who's on the run from a drug deal gone bad.

He finds himself landing a big job working as a law associate for Harvey Specter.

Despite never attending law school, Mike accidentally interviews for the job, and gets it, landing himself a top positon working with Harvey Specter, one of New York City's best lawyers.

The show focuses on Harvey and Mike closing cases, all while maintaining Mike's secret.

And, let's be honest, being a lawyer without going to law school is a pretty big secret to have.

The hit series has had 8 full seasons so far.

The show has been on our screens for a whopping 8 seasons (with the ninth currently airing) and has seen itself become a popular pick amongst law students.

It's also got a very famous cast member...

The Duchess of Sussex, Megan Markle, played Rachel Zane in the drama but left in April last year to join the Royal Family. What a turn of events.

The drama has just begun airing its final ever season.

With the final episodes of season 9 airing later this year, it will be the last time that we'll see the show on our screens.

The cast have already started saying their bittersweet goodbyes.

As they wrapped up production on their final ever episode, the cast took to social media to bid the show a final farewell.

Leading the tributes was Gabriel Macht - aka Harvey Specter.

The actor took to Instagram to pen a poignant message about the show, thanking his wife, Jacinda Barrett, for sticking by him as well as the team, and, of course, thanking fans of the hit series for their support.

In the Instagram post, he wrote: "9 years ago I started the @suits_usa journey. It all began with the most important person in my life by my side." This life that has offered us so much... some easy, many challenging, countless miles apart and hours, days, and months separating us and our loved ones, not to mention years of sacrifice on so many levels." He then went on to thank his "wonderful" crew and "fantastic" fans: "I count my blessings you sticking with me through to the bittersweet end of this era. As I have thanked my wonderful crew, my talented ensemble, and the fantastic fans that keep coming back for more... I am most grateful for @jacindabarrett because without her there is no way any of this would have happened."

Meanwhile, Sarah Rafferty, who plays Donna Paulsen in the series, posted a snap with Rick Hoffman, aka Louis Litt, to mark the occasion.

“And that’s a series wrap on my brother @rickehoffman." "No words for this one," she wrote.

He thanked her for supporting him every step of the way during his "9-year dream." "So it’s the last week of a 9-year dream, and the person responsible for bringing me in to meet my boss, and reading with me, supporting me every step of the way, and therefore changing my entire life is @bonnieezane," he wrote. "Her warmth and sense of humor, and passion for casting every fun role around us was contagious. A family member for life. Thank you dear Bonnie. I love you."

She called the entire cast her "family" in a touching Instagram post. "My salute to the MOST delicious cast and crew, was wonderfully private, including hugs I can still feel. "Today I say goodbye for the second and last time to all that made this show so very extraordinary. You know who you are."

And it's not just the cast bidding the show farewell - fans are also saying goodbye.

Although many viewers seem disappointed that the show is coming to an end this year, many are saying that the final season is giving the show the best send-off.

Fans finally saw the drama between the Spectre, Litt, Wheeler, Williams law firm come to an almightily head when Harvey promised Faye that he (and his new wife Donna) would leave to move to Seattle with Mike Ross to help fight for good.

But, of course, one important character was missing...

The character of Rachel was absent throughout the full last season because her real-life counterpart, Meghan Markle is busy being a Princess in the British royal family. Duh.

Meghan famously left her acting life behind her when she married into the royal family.

And her character, Rachel Zane, was subsequently written out of the show with a move to Seattle at the same time Mike Ross left.

Many of the Suits cast were actually invited to the royal wedding.

So, of course, they paid tribute to Meghan's absence in the final episode.

The show have made hints at Meghan’s current status in the past. When Mike first returned to Season 9, his character was asked how Rachel was, in which he replied: “If I told you how good, you probably wouldn’t believe me."

But this joke was a direct reference at Meghan's life-changing marriage.

During Louis’ wedding to Sheila, Harvey does his best to psyche him out so that he "won't notice that Sheila’s sister is missing." Louis is looking all dapper wearing a fancy hat and a long suit when Harvey says, “Wait a second. Are you wearing a morning coat?" to which Louis replies, “Of course I’m wearing a morning coat. Frankly, I’m disappointed you’re not." And then, Harvey quips, “Louis, you’re not the prince of England." I couldn't have put it better myself. Looking for something to watch now Suits is over? Keep scrolling for the very best Netflix has to offer, ranked.