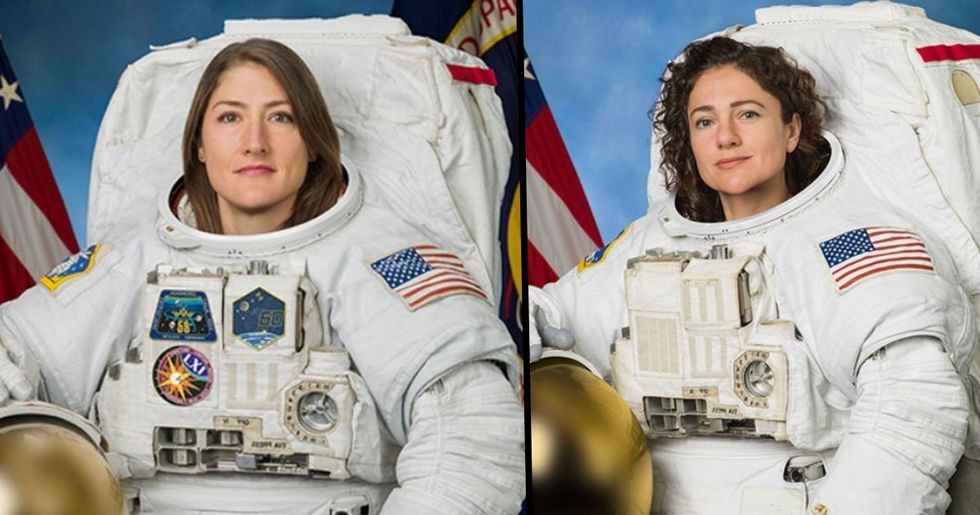 Astronauts can now spend up to half a year living in international space stations and many are sent to and from space all the time.

Spacewalks happen all year round, but the team of astronauts who are sent is always dominantly male - but things are about to change.

In the next forty-eight hours, it is scheduled to send the first-ever all-female spacewalk crew into space and it will make history in the world of astronomy, so keep scrolling to learn more...

Astronauts spend up to 6 months living onboard the ISS.

The space station travels through space at a staggering 17,500 miles per hour at an altitude of about 220 miles, and each mission lasts around 6 months - which is the time an astronaut will spend at a time onboard.

Any time an astronaut gets out of a vehicle while in space, it is called a spacewalk. A spacewalk is also called an EVA. EVA stands for extravehicular activity.

Spacewalks are a regular occurrence today in 2019.

Today, astronauts go on spacewalks outside the International Space Station and now, spacewalks usually last between five and eight hours, depending on the job.

But there's a noticeable trait in NASA astronauts...

In similarity to airline pilots, it is noticed that the majority of astronauts and teams that jet off into space are primarily male.

Astronomy is an industry that goes back decades.

As put forward by News Scientist, this is an industry predominantly designed for and tested by men, it has always struggled to understand and accommodate the different needs of women.

Being an astronaut has always been built around the male form...

In the early years of space travel, one group of researchers said women were advised not to operate any complicated machines whilst menstruating. When America's first female astronaut, Sally Ride, was going on a week-long stay in space, she was offered 100 tampons along with a make-up bag. Even today, space radiation shields designed for women struggle to fit the female body.

Only fifteen women have ever been on a spacewalk.

These women have always been accompanied by men, and this is out of the 200 spacewalks that have since been completed by astronauts and cosmonauts.

But things are about to change...

NASA has announced that they have been planning an all-female spacewalk and it is due to set off late this week - predicted to be within the next forty-eight hours.

The spacewalk was initially postponed...

It was originally scheduled to take place more than 6 months ago, involving astronauts Christina Koch and Jessica Meir, but it was delayed because Nasa did not have enough of the correctly sized suits available and ready to use on the station.

It is vital that an astronaut's spacesuit fits correctly...

There was only one useable medium-sized suit available in time, and the women needed one each.

More and more women are venturing into space...

“It turns out that over the next couple of years we’re having a lot of medium-suit people fly, and so that’s the sweet spot," the program manager for the International Space Station, Kirk Shireman, told a press briefing earlier this month.

This walk has been highlighted as "historic" by NASA.

The pair of astronauts were asked what they thought about their possible participation in the first-ever all-female spacewalk, and Koch responded with: "I do think it’s important, and I think it’s important because of the historical nature of what we’re doing, and that in the past women haven’t always been at the table. And it’s wonderful to be contributing to the human spaceflight program at a time when all contributions are being accepted, when everyone has a role, and that, in turn, can lead to an increased chance of success." "There are also a lot of people that derive motivation from inspiring stories from people that look like them, and I think it’s an important aspect of the story to tell."

She acknowledged their achievements in the context of their gender: "It’s just normal, we’re part of the team, we’re doing this work as an efficient team working together with everybody else, so it’s really nice to see how far we’ve come."

This could be the start of a new era...

The new lunar suit that has been designed for this mission should help overcome NASA's spacesuit sizing issues as it is a one-size-fits-all garment designed for men and women. The all-female spacewalk will certainly go down in history, and it will hopefully encourage NASA to send more and more women into space without the need of male assistance.