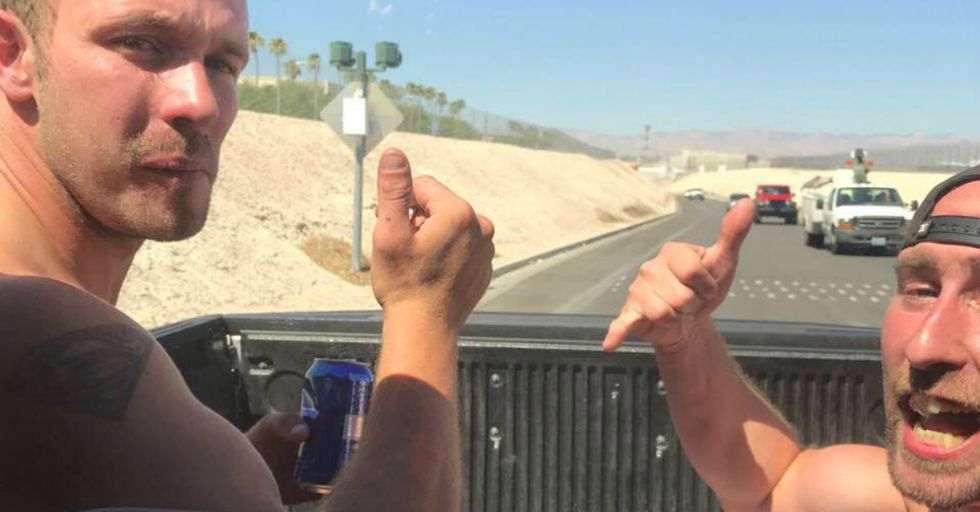 They say what happens in Vegas stays in Vegas. But technically the Hoover Dam is just outside Las Vegas near Boulder City on the Arizona-Nevada border, so we can share this completely insane story with you.

Here it is: Arron Hughes, 28, from the UK, was arrested for swimming across the Hoover Dam, making him the first person to survive doing so, thanks to some amazing luck and potentially a lot of alcohol.

The city of Las Vegas is the ultimate bachelor party destination.

So you'd think by now that the people of Las Vegas would have seen, well, everything.

Unfortunately, that wasn't the case.

The Hoover Dam is over 700 feet long and no one has ever survived a swim in its murky waters. In fact, 275 people have reportedly died in them within the last ten years.

This fact, as well as basically every other fact, was largely unknown to 28-year-old Arron Hughes after his 37-hour bender in Vegas.

He was in Las Vegas for a friend's bachelor party, and after over a full day of partying, decided it was hot, and he'd like to go for a swim.

But instead of taking to the hotel pool, he decided to rough it a bit.

Choosing to instead tackle the dangerous waterway in front of the Hoover Dam. A swim that took him 30 minutes and left him feeling "knackered".

The man, who works back in the UK as a forklift driver, was subsequently arrested.

But not before making history as the first man to accomplish this feat without dying horribly. But his story definitely wasn't over yet...

His survival stunned everyone, including local authorities.

“They were like ‘nobody has ever done this before.’ So in the end I just got a fine." he told the Daily Post after his arrest.

Mr. Hughes was especially lucky, because a large number or the dam's turbines were actually turned off.

“Because I went close to the dam first and I could feel it sucking me in, I thought ‘I've got to get out of here quick.’" he told the paper.

Even more impressive, he completed the entire swim with his shoes still on.

Something that came in handy when he got to the other side and had to climb up the rocks to reach the police officers who were waiting for him.

Obviously, Twitter had a field day with this tale of the ultimate drunk escapade.

Of course, a hangover was the least of what this guy had to worry about.

Considering there was a very real possibility that he could've, you know, died by being sucked into a whirring turbine. Luckily, he had a secret weapon...

He comes from a land where drinking is the national pastime.

That said, let's all try and stay out of the water from now on, kids. We're pretty sure they'll end up turning the rest of those turbines on at some point.