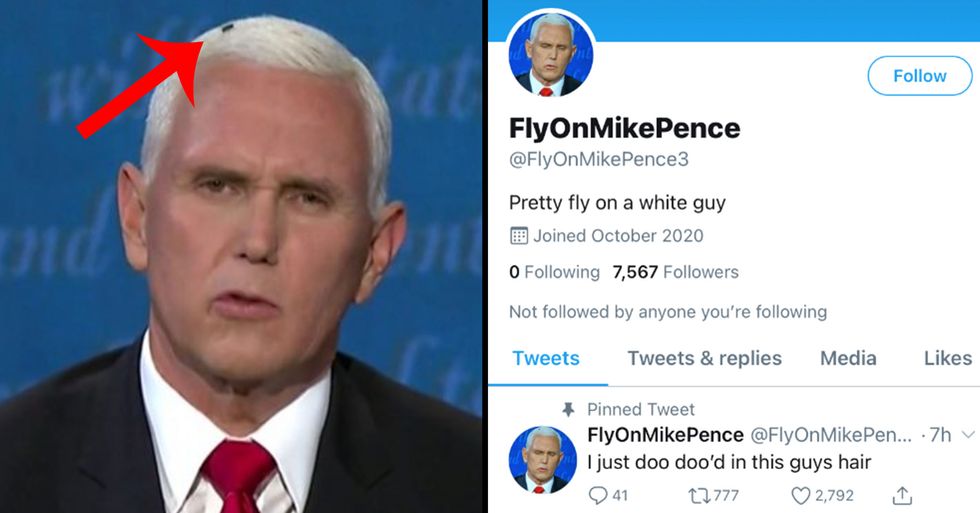 The fly that landed on Mike Pence's head during last night's vice-presidential debate has been stealing all the thunder and now, it has it's own Twitter account.

It's probably the most hilarious thing you'll see today...

Following the explosive debut presidential debate nearly 2 weeks ago, it is now time for the vice nominees to have their say.

It was a ferocious debate, to say the least...

But there was one thing that caught everyone's attention.

Because a fly decided to land on Pence's head halfway through the debate and this has turned the vice-president into a complete laughing stock online.

But before we get into that...

Let's firstly meet our candidates and see what went down last night.

Standing for the Republicans, we have the current Vice President, Mike Pence.

So people were expecting a real show.

Well, a show is what people got!

Of course, the pandemic became the main talking point of the event and in the 90-minute live debate at the University of Utah in Salt Lake City, Harris accused Pence and the president of deliberately misleading Americans about the lethality of coronavirus: "They knew, and they covered it up."

Referring to a blunder that ended Biden’s 1987 run for the presidency when he plagiarized a speech.

Susan Page, who moderated the event, then quizzed Harris on whether she would be taking any government-approved vaccine in the run-up to the election...

But aside the vicious comments and hot-headed debating, there was one thing that people just couldn't help but notice.

And that was a fly that decided to land on Pence's head during the debate!

It was honestly the funniest thing to witness, and the internet has been going wild for it!

And trust us when we say this, the fly has been having a field day on Twitter since it made its debut on Pence's silver locks.

Houseflies live for 28 days! That means I will get to see Biden/ Harris win the nominee!!! Go vote! #FlyonMikePence
— FlyOnMikePence (@FlyOnMikePence)1602124141.0

This was actually the biggest piece of shit that I’ve been on! https://t.co/uINchMQ6Vn
— FlyOnMikePence (@FlyOnMikePence)1602124957.0

We all know that flies love things that are dead on the inside. https://t.co/hMME6U5Aei
— FlyOnMikePence (@FlyOnMikePence)1602127574.0

We're not sure how Pence will bounce back from this...

But we've sure as hell had some fun all thanks to that trusty housefly! Keep on reading for the latest on President Trump's condition...