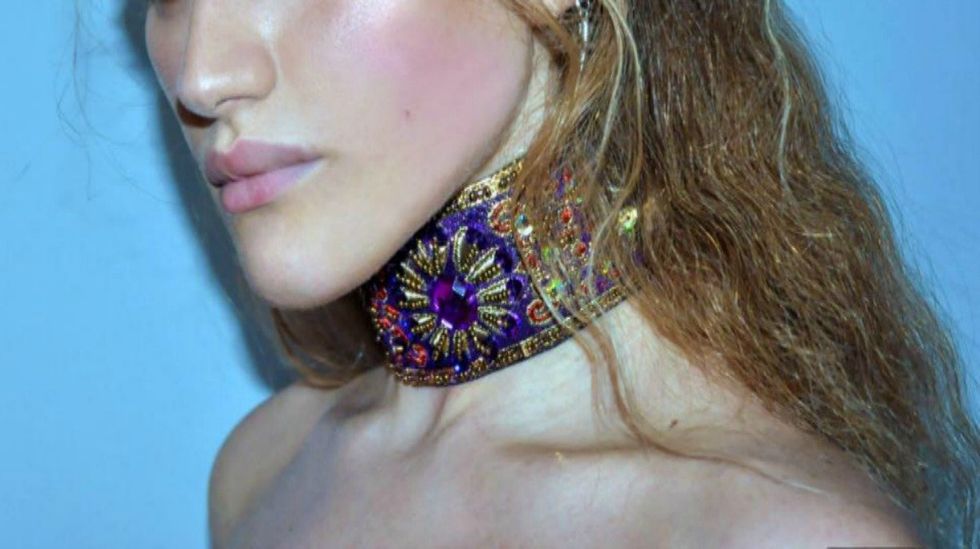 A Model's Unibrow is Taking the Fashion Industry by Storm

Among the various rituals of self-grooming, those of us endowed with full, bushy eyebrows know the struggle of keeping furry caterpillars in check. Waxing, tweezing, and threading are just some of the many lengths we go to in order to chase perfect arches. It's a tortuous battle.

But one lovely lady is proving it doesn't have to be.

Gifted with lush brows and killer cheekbones to boot, Instagram model Sophia Hadjipanteli is proving to the world that beauty is far more than the sum of one's waxing ability.

And frankly, we're all a little relieved.

The Cyprian model has nothing but praise for her unique brows, and what other's think doesn't seem to ruffle her. In a recent interview with Harper's Bazaar, Hadjipanteli doesn't mince words when it comes to her personal style. "I personally think my face looks better this way. Others disagree, and that’s totally cool."

Not just another pretty face.

Hadjipanteli isn't getting by simply on her good looks, however. The stunning beauty is a marketing major who's also aware that her brows, famous as they are, don't define her.

"I want to be sure that I am not defined by the way I look right now. I look at my unibrow like it's winged eyeliner or red lipstick," she says.

She's not asking everyone to be just like her.

With nearly 100K followers on Instagram, the unique-browed beauty might feel compelled to step into the role of "influencer." Instead, she has a different message:

"I am not trying to get anyone on the unibrow bandwagon. If I like this, just let me like this."

But on another note, don't ask her to change.

More than a few people hold the opinion that perhaps Hadjipanteli's eyebrows buck today's beauty trends a little too much. Her response? She ain't got time for it: "Don't call me beautiful and then end the statement encouraging me to change something about the way I look."

She's been involved in brow experimentation.

Though a brow purest, Hadjipanteli isn't adverse to trying new things with her arches. The tinted look she rocks from time to time was somewhat of an accident. Or fate. "I saw a video on YouTube where someone tinted their eyebrows. I tried it, and I must have messed up and made them black," she says. "My brother was like, 'It kind of suits you.'"

But she admits to being a little confused.

The standards of beauty aren't lost on the blonde bombshell. She's simply trying to figure out why people draw the line at her natural brows. "I think it's kind of bizarre that people who fill in their eyebrows, not that I'm hating on people that do at all, but they're annoyed when I don’t fill mine in and leave them as they are. We are both trying to achieve the same standard of beauty, but in a different ways."

Her looks stun wherever she goes.

Admitting that her style can be blatantly eye-catching, Hadjipanteli does her best to stay true to herself, while not going too far over the top. It's no secret that she loves bold eye shadow and dramatic lipstick, and that can be a lot for her fellow classmates to take in. "Sometimes it does look like a lot, even for my preference," she says.

She gets it from her mama.

Well, it's probably a little bit of her mom and her dad, but there's no question that Hadjipanteli hit the genetic jackpot. Her family also did wonders for her self-confidence, she says, and her mom helped her with invaluable grooming routines early on. "If you’re in a family where your brother and dad also have really nice eyebrows, you’re never really self-conscious of having thick eyebrows," she says.

Let's talk about those grooming habits.

Like any other model, Hadjipanteli has her own beauty routine. Sure, her brows are born free and run wild, but that doesn't mean she's thrown grooming habits out the window. In addition to tinting her brows, she relays that she highlights her orbital bone with castor oil. "It really does help, it's not just a myth," she says.

All that maintenance pays off.

Well-groomed brows definitely come in handy when you're portraying one of history's most famous unibrow sporters. Hadjipanteli recently did a photo shoot dressed as Frida Kahlo, and the results were beyond beautiful.

She has no plans for change.

Content to rock the awesome style she's carved out for herself, Hadjipanteli doesn't seem to have any pressing plans to jump on the plucking train anytime soon. And why would she? This girl is in a fabulous league of her own. "In five years I might look back and think, 'that was a cool phase!' But until people start to accept others for this specific feature on their face, I won't feel ready to move on from it," she says.

She may have been searching for the perfect caption in this photo, but it looks to us like she's just a regular girl, living a regular, if un-plucked, life. But maybe Hadjipantel is truly on to something. Perhaps we should all let our brows run wild for a bit. It looks like it might just be a lot of fun.