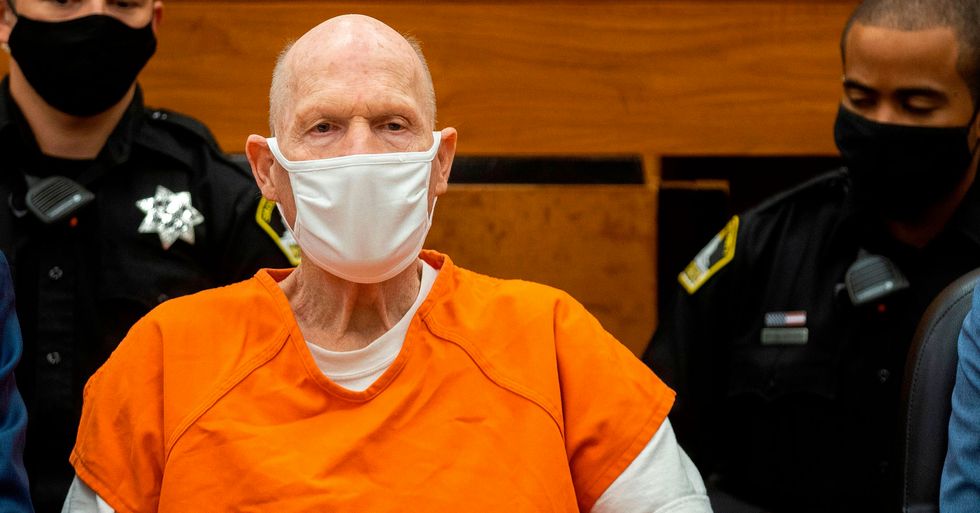 The Golden State Killer Has Been Sentenced To Life in Prison

The urge to kill has been a subject of intrigue for decades - especially when it comes to serial killers.

And now one of the most notorious has finally been sentenced for crimes committed decades ago...

Fans of true crime will know this one ..

The story of the East Area Rapist / Original Night Stalker is truly the stuff of legend.

This man is also known as the Golden State Killer.

He terrorized the state of California for decades under different aliases, managing to evade capture.

But all that changed.

The true-crime community got their teeth into the cold case, and something miraculous happened.

This is Michelle McNamara.

The author (and late wife of comedian Patton Oswald) wrote I'll Be Gone In The Dark, the story of her attempts to solve the grisly crime.

The incredible story was made into a popular HBO documentary.

As the discovery of the real identity of the Golden State Killer (Joseph DeAngelo) was discovered.

The urge to kill has been a subject of gross fascination for years.

Serial killers have struck up terror in society for decades, so it's no wonder that many of us are fascinated by what causes them to kill.

The subject of murderers, in particular, serial killers, has become the center of countless true-crime documentaries and films.

The streaming giant's series, Making a Murderer, arguably skyrocketed everyone's fascination with the overarching true crime genre. The story dealt with a man who may or may not have been wrongfully imprisoned for the murder of car photographer, Teresa Halbach.

Ted Bundy has been the focus of a more recent Netflix offering.

Bundy is one of the world's most notorious serial killers, who confessed to killing thirty young women from 1974 to 1978. Although, the actual number of victims is unknown.

Many of us are curious about what motivates their cold and calculated crimes.

And these monstrous killers have long been the focus of countless psychological studies.

The sheer conflict between horror and humanity has fascinated many professionals...

Why anyone would want to inflict such horror on another human being is truly a mystery.

There's one huge factor that physiologists have been unpicking for decades...

It's a trait shared amongst most serial killers.

The personality disorder essentially creates reduced connectivity to the emotional system in the brain - meaning that these individuals can exhibit a wide range of behaviors including lack of conscience, inability to follow rules, tendency to lie, and manipulation.

The long-standing debate over what exactly causes psychopathy is still ongoing, with a set cause not yet determined.

But what makes serial killers even more chilling...

Their psychopathic tendencies can allow them to blend well into society - leaving many people unsuspecting.

An investigation into serial murder by the FBI’s Behavioral Analysis Unit in 2005 concluded that: “they are not monsters and may not appear strange. Serial murderers often have families and homes, are gainfully employed, and appear to be normal members of the community." Their "humanness" is one of the aspects that makes them so compelling.

It's also one of the reasons why the police rarely catch them early...

And why they can go on killing, undetected, for years - sometimes even decades.

Some of the most notorious serial killers of all time were diagnosed as psychopaths.

Including Ted Bundy, Jack The Ripper, and Jeffrey Dahmer.

In fact, these Ted Bundy quotes truly sum up the mains traits of psychopathy...

And it seems Joseph DeAngelo fits the same mold.

His sheer number of crimes boggles the mind, starting with burglaries, then moving into rapes, and finally murders.

After being caught (largely thanks to the work of McNamara) he has now been sentenced.

DeAngelo pled guilty to 3 counts of first-degree murder and 13 counts of kidnapping for robbery.

DeAngelo also admitted he was guilty at least 50 rapes and more than 120 burglaries for which he was not charged.

And luckily, it seems as though his sentencing fits his crime.

"Are you capable of comprehending the pain and anguish you have caused?" Sacramento County Superior Court Judge Michael Bowman asked him.

This was the maximum possible sentence.

Many on Twitter had huge reactions to the news.

But as the historic criminal case comes to an end, victims and prosecutors struggle with what constitutes justice a… https://t.co/Ne2Zuuelg1
— Los Angeles Times (@Los Angeles Times)1598030823.0

@latimes He was my literal next door neighbor growing up. He would yell at me and my mom when we drove or walked by… https://t.co/IrqDS6ryRy
— Squirmy Spermy (@Squirmy Spermy)1598032879.0

@latimes It’s disgusting how long it took to find him , How many people suffered because of him and he has the ten… https://t.co/tAFSFTsSBT
— robeagle (@robeagle)1598033321.0

Scroll on for the latest Ted Bundy documentary updates...