The Good, the Bad, and the Ugly of Matt Lauer's Career | 22 Words 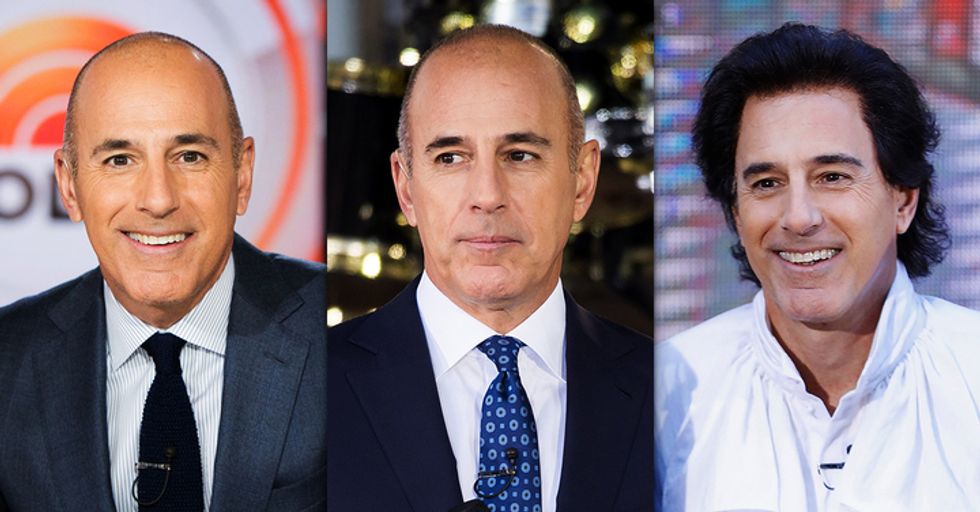 The Good, the Bad, and the Ugly of Matt Lauer's Career

Matt Lauer was fired from NBC this morning for sexual misconduct. This came after an employee entered a complaint that accused Lauer of "inappropriate sexual behavior" in the workplace.

People who worked with him weren't necessarily surprised. But most people who have woken up to his smiling face on their TV for years were in for quite a shock.

Matt Lauer has been a staple in NBC news since he started hosting the Today show in 1997.

When he began on the Today show, he helped NBC bring the morning segment up to the top of the Neilsen ratings, beating Good Morning America. He regularly hosted parts of the Olympic Games, as well as the annual Thanksgiving Day parade.

He used to host a "Where in the World is Matt Lauer" segment.

Viewers loved the lighthearted series, where Matt showed reported from different places around the world. He had an iconic interview with then-first lady Hillary Clinton about the Monika Lewinsky scandal that helped him move to harder news. He eventually interviewed other high-profile people like Prince William and Harry and past presidents Barack Obama and George W. Bush.

This year he dressed up as Dolly Parton. He's also dressed up as Lucy from 'Peanuts,' C.J. Parker from 'Baywatch,' Paris Hilton, and Jennifer Lopez.

Matt is not afraid to go to extra lengths for a segment.

In February of 2015, he had an interview with Fifty Shades of Grey actors. Ellen photoshopped him casually wearing a bondage vest and holding a whip and handcuffs. Actress Dakota Johnson did not appear comfortable with this.

He has a history of treating women badly, whether it be straightforward inappropriate behavior or more general creepy comments.

Conan complied some of Lauer's creepy moments on air. Remember, these are only the ones caught on camera. If someone is saying these types of things when they're aware that they're on national television, what kind of things are they saying and doing off the air?! His on-air behavior only gets worse...

Katie Couric, who worked with Lauer for years, openly admitted that Lauer acted inappropriately around her.

In an Interview, Andy Cohen asked, "You co-hosted the Today show with Matt for fifteen years. What is his annoying habit?" She said, "he pinches me on the ass a lot." For Katie to say this so openly on air, it must have really happened often.

In this clip, Sam Seder talks about some of Matt's creepy behavior.

Most notably, when Matt was interviewing Anne Hathaway, he began the conversation by asking her about an inappropriate picture that was taken of her at a movie premiere. Immediately after saying good morning, he creepily said, "[I've] seen a lot of you lately." Anne, who like many other women felt the need the laugh and apologize to brush off a creepy comment, giggled and said, "sorry about that." She continued, "I'd be happy to stay home...but the film." So here's a woman who would like some time to herself after being publicly violated, and Matt decided to make a scummy joke about the incident on national television instead of talking about her acting abilities.

But he wasn't done!

He continued, "Wardrobe malfunction from the other night... what's the lesson learned from something like that, other than that you keep smiling, which you always do?" She clearly does not want to be smiling right now, Matt, but she is because that's the only way to not offend you while you're asking this inappropriate question. Anne said, "It kind of made me sad...We live in an age where someone takes a picture of a person at a vulnerable moment and rather than delete it, and do the decent thing, sells it. And I'm sorry that we live in a culture that commodifies sexuality of unwilling participants, which brings us back to 'Les Mis,' because that's what my character is." She clearly did not want to talk about what happened and had to steer the conversation back to what she was supposed to be talking about on the show. Matt said, "That is one of the most creative turns of a question I have ever heard." This is just one example of women having to jump through hoops to sidestep uncomfortable situations with creepy men.

Not only did Matt Lauer allegedly touch women inappropriately, he also sidelined them during interviews.

In part of the article included in this tweet, Adele M. Stan talks about the negative consequences of Lauer and other men acting openly sexist towards women. An example of this is during an interview that Lauer had with Hillary Clinton before the election. She wrote, "When questioning Clinton, Lauer was all alpha-male, interrupting her and tsk-tsking her for criticizing her opponent after he had asked her not to do so. But when paired with Trump, it became clear who was the alpha in that set-up. It clearly wasn't Lauer, who allowed Trump to talk over him, and to evade specifics. When Trump criticized Clinton, Lauer allowed him to slide."

This is just one example of how men have gotten away with being openly sexist.

B.L. McMillan said, "Any man who feels entitled enough to do this in public, will treat #women even worse in private." In response to the quote from Stan's article, Twitter user juliesauls901 explained how sexist behavior goes beyond rape and assault. She said, "Yes, excellent example of how this behavior permeates a person's entire life. It isn't just sexual assault, harassment, and abuse, it's an attitude that degrades and belittles all individuals in the group chosen by the abuser." There are starting to be consequences for this type of behavior in the media, but not in other public places like *cough* the oval office *cough*. It is ridiculous that it is taking this long for misogyny to start being followed by actual change.