The Gorgeous Dogs in Training for the Iditarod, Alaska's Famous Sled Race | 22 Words 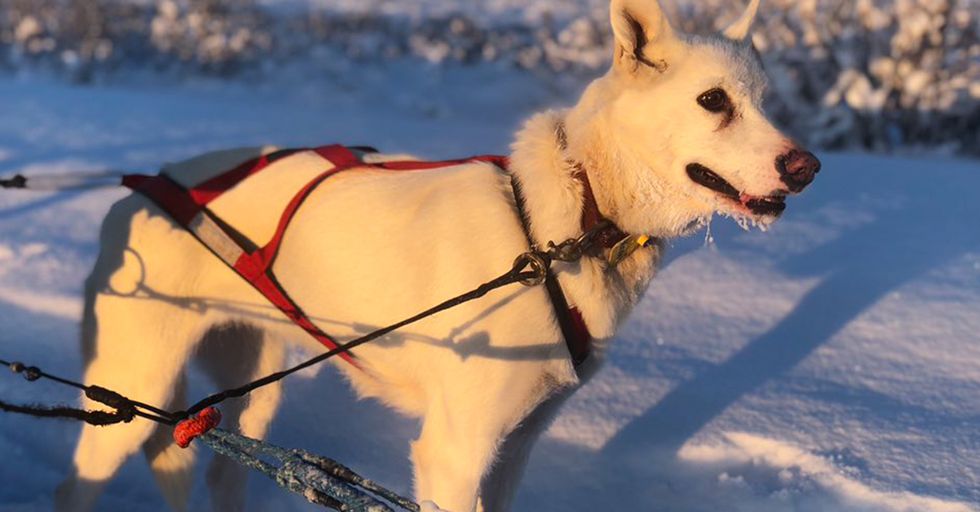 The Gorgeous Dogs in Training for the Iditarod, Alaska's Famous Sled Race

Some people call it "The Last Great Race on Earth" others call it "The Best Place to See Cute Doggos." Okay, no one actually calls it the latter, but it's still very true.

The Iditarod is a dog sledding competition held annually in Anchorage, Alaska, and it seems like every year, the competitors just get more adorable. This year, one of the dog trainers has so graciously allowed the public to meet some of the dogs she is training to compete in this year's race. Although these dogs are obviously adorable and fluffy, there are also some of the greatest athletes and most serious competitors in their leagues.

With so many unique personalities, these sled dogs are for sure going to sweep you off your feet and impress you with their amazing athleticism. Get ready to meet the team.

Welcome to the race

The Iditarod Trail Race started in 1973 in Anchorage, Alaska and the tradition has only gotten stronger since then.

The dogs who compete in this race have been training since they were puppies to endure the intensity and extreme conditions they will experience in the race.

These are some fast pups

The race is a total of 938 miles, as the dog's race from Anchorage to Rome, Alaska. It takes a team of 16 dogs, plus their musher (the person on the sled) anywhere from 8-15 days to complete the race.

It's about to get chilly

Conditions get intense, as temperatures can drop to -100° F, which I didn't even know was possible. These dogs need to be in the best shape possible in order to endure the entirety of the race.

Only the best from Blaire

Blair (@BlairBraverman) is a total B.A. dog trainer and she's got a hilarious Twitter. She decided to do a little profile on each dog, sharing the cutest photos and fun facts for each pup.

Pepe is obviously adorable, but she's also a total beast. She leads the pack with fierceness and intelligence. The leader of the pack is chosen wisely and has to have the skill and endurance to lead the entire team.

She can't be stopped

Athleticism runs in her blood. Blair shared that Pepe's mother, who was a racing dog that just recently retired, will be proudly waiting for Pepe at the finish line this March if she gets chosen to compete. Did this make anyone else slightly emotional?

I relate with Flame on a few levels. It's okay to love cuddling, we feel you Flame.

Fun fact: Flame is terrified of human babies but loves baby animals. She’s been an aunty to all our puppies and onc… https://t.co/ITER1bbIB6
— Blair Braverman (@Blair Braverman)1546395830.0

Flame adopted some chickens and although she looks a little uneasy, apparently she loves chickens more than she loves human babies. What a quirky little pup.

Meet Jenga, who is Flame's half-sister. She is definitely a boss and did not come to play games. She's a natural leader and thrives in adversity.

Fun fact: Jenga carries the weight of the world in her chin and often rests her head on the dog next to her. https://t.co/WT95dqcWNP
— Blair Braverman (@Blair Braverman)1546396474.0

Even queens need a place to rest their heads. Keep it up, Jenga. We're rooting for you.

The Grinch stole my heart. It's okay to be adorable and a little confused at times. He's goofy and strong, what's not to love?

A borderline train wreck, turned into a hero

Poor Grinch did not have the greatest potential predicted by doctors, but look at him now, rising above his trials.

He can only run in one direction. But when he finally runs, he does it well. It just takes him a minute or so, which is totally fine.

We all know someone like Colbert. That one friend who is always ready to jump up and go on an adventure. They are usually morning people and we love them, we just can't all be a Colbert naturally.

The most fun facts

Colbert has some super fun facts: he's afraid of heights and he's the only Catholic dog. I wonder if he attends mass?

The puppy with a troubled past, but great endurance. An underdog for sure.

Boudica just loves love. She wants kisses and cuddles and I mean, who could say no to that face?

Another reason to love Blair, she created the Sled Dog Softness Index or SDSI. It took some science and a cool graph to explain it all. And guess who's number one? Our girl Boudica.

8. Helli (age almost 3) Helli, previously nicknamed Hellbitch, is our latest addition to the team. She is skinny a… https://t.co/yJ6NGWmBex
— Blair Braverman (@Blair Braverman)1546399617.0

Short for, well you can see her full name in the tweet, this dog is not messing around. I wouldn't want to meet her in a dark alley. Small but fierce, Helli is one hell of a dog.

Sometimes a little sisterly competition can be good and clearly, these sisters have a little jealousy going for them. Hopefully, they channel their anger into their racing abilities.

Meet Ebony's sister. They are a little different, but both love kisses and food. I relate to Lucy on a spiritual level: always having seconds and looking awkward in every photo. It's okay Lucy, your quirks make you beautiful.

The love story we were waiting for

One of the youngest pups in the squad, Wickson is energetic and excited about his new career as a sled dog. Hopefully, his energy as a young pup can bring some motivation for the other dogs on the team.

All he needs is a lullaby!

We are happy to help him manage his hyperactivity with lullabies and cuddles. The soft attention seems to temporari… https://t.co/RljH1vurcj
— Blair Braverman (@Blair Braverman)1546406103.0

Wickson is a man who knows what he wants and all he wants is a lullaby and a belly rub. He's just a giant teddy bear who needs a little extra love.

Spike has grown into his big head and now none of the other dogs can tease him for it. He's also Pepe's son so he's got some good genes.

The most adorable advocate

We love a sled dog that stands up for human rights. This dog is going to change the future.

Here's Clem, the potato-like late bloomer who has already stolen my heart. Look at that face. It's impossible not to love him.

Sister of Clem, Anya is the beauty and the beast. She may seem fragile, but she's killing snakes in her spare time, so don't turn your back on this one.

You can bet your bones that Xander will give you the paw if you've made him happy. He's a good boy and that perfect puppy smile says exactly that.

Champions get tired too

Fun fact: Xander got tired during the Percy DeWolfe race so he hung out on my lap and learned to drive the sled. https://t.co/3GXQ50DdiB
— Blair Braverman (@Blair Braverman)1546408773.0

Look at how happy he looks! He just wanted to ride shotgun in the sled. What a good boy.

Okay, this dog can run 17 miles per hour? There's no way I'm out running this dog. Her ham diet must give her super speed.

Blair calls these next few her "journalist pups" because she named them after some pretty famous journalists. Jeff is an award-winning writer, and Jeff is also a big-headed, talkative doggo. We love both Jeffs.

Wickson and Jeff Sharlet have an on-and-off friendship, depending on which one’s feeling more mature on a given day. https://t.co/4cMY9bzFlO
— Blair Braverman (@Blair Braverman)1546409888.0

At the end of the day, these dogs are just like any other dogs in the world: still playful and still annoy each other.

Talese, named after Gay Talese, the legendary writer and reporter, is also a legend of his own in the sled racing world. He's focused, ready to race and holds his own in the midst of chaos. I feel like we could learn a lot from Talese.

Named after the amazing journalist Hunter S. Thompson, our furry Hunter holds her own against the boys and doesn't allow her size stop her from being a total speed demon.

Boo, our final pup, is named after investigative journalist and Pulitzer Prize winner Katherine Boo. Boo gets cold, which is understandable and loves expressing his emotions. I think if I were a dog, I'd most likely be Boo.

And that’s everybody in training right now! I can’t wait to keep exploring with these friends. https://t.co/sWlUlwNa52
— Blair Braverman (@Blair Braverman)1546411490.0

Well, if that wasn't the cutest lineup ever, then I don't know what is. I'm rooting for these pups, even if not all of them will end up in the race.

It's all about love

@Kim_AussieGirl Nobody is getting rich from dogsledding, because it’s a tremendous amount of work and expenses (lit… https://t.co/n4n0dMjmyE
— Blair Braverman (@Blair Braverman)1546452193.0

Blair let us meet the champs and taught us a lot about the reality of dog sled racing. It's true that each dog has its own personality, and we can't wait to see these dogs compete and run their little hearts. Share this with your dog-loving friends and get them ready for the Iditarod!