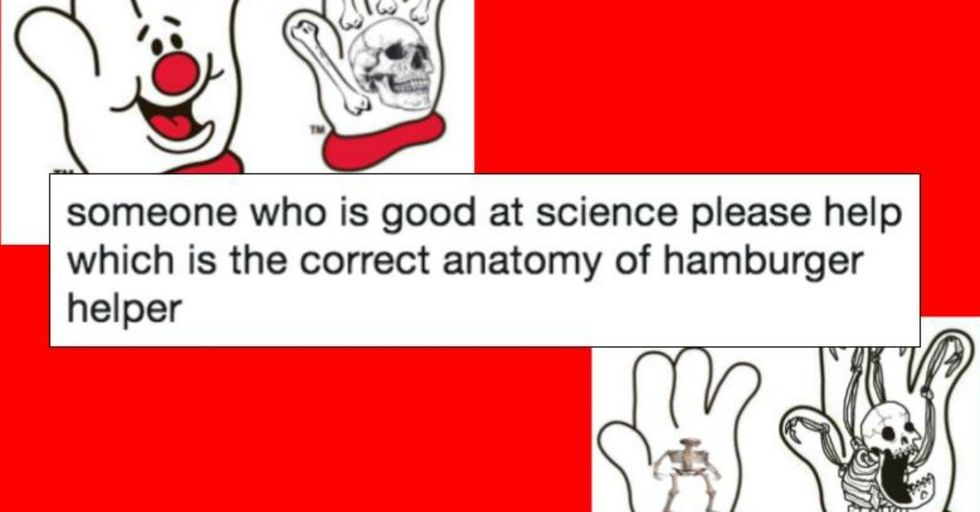 Hamburger Helper, which has helped families served up side dishes since the '70s, is perhaps best known for Lefty, the brand's "friendly oven glove" cartoon mascot. We all know Lefty's cheerful face and billowy, four-fingered figure. But what's inside that glove? Twitter user @soongrowtired asked about Lefty's skeleton, unleashing a thread of answers that we honestly were not quite ready for.

Twitter user @soongrowtired posted the question during the morning hours of October 10.

"Someone who is good at science please help... which is the correct anatomy of Hamburger Helper?" they yelled into the Internet void. The image compares the original logo with two possible skeleton structures. The first puts the skull at the center of Lefty's palm, with a bone in each of the fingers of the glove. The second places an entire small skeleton smack-dab in the center of the palm.

Unbeknownst to us, the internet apparently already had a lot of opinions about Lefty's internal anatomy.

@Wesley_Barton, presumably a doctor, biologist, or at least a cartoon-glove anatomy specialist, had an answer to this conundrum at the ready. "He's actually an invertebrate made mostly of very low density fluid and air sacs, kinda like a cephalopod or jellyfish in air, not water," he wrote.

Let's just assume everyone that replied to this thread is a cartoon skeletal specialist, OK?

The cephalopod theory was creepy, but this one is creepier. @cmacsbrain shared a hand-drawn photo of a skeleton that resembles that of an alien rodent more than a human. Who are we to assume that a human skeleton would exist inside a cartoon glove? The mysteries of the universe are vast and puzzling, friends.

Twitter user @cmacsbrain elaborated on his creepy-crawly drawing with some background information and a legendary pun.

"These aliens accidentally ended up on Earth. They didn't predict a cheerful glove as their host either, but that's the hand they were dealt," he explained.

@joelcarrol had a skeleton plan that, while still creepy, honestly looked the most appropriately suited to the Hamburger Helper hand.

It looks like a skull with a spinal cord supporting the back, with four finger bones sticking straight out of the top. According to the next submission, thinking this skeleton was the perfect match was an easy mistake for laypeople such as ourselves.

Twitter user @Sindershift drew a terrifying, stringy skeleton creature that looks like it was born in a Tim Burton movie.

They wrote, "I can see why you'd think it was one of those, but as an actual skeletologist I can confirm it's [the correct internal anatomy of the Hamburger Helper] actually this."

It's "mostly cartilage like a shark," they said, obviously an expert in their field. Turns out many believe Lefty to be some sort of a sea creature, but the masses are divided on whether he's more like a mollusk that uses the glove as a shell, or more like a dense shark made mostly of cartilage.

This take took the skull and fingers idea a step further.

@Artildawn added a few extra bones to the fingers, a jawbone to the skull, and a couple of tail bones for good measure, adding "Terrifying to think about." Indeed.

What if ... we'd been looking at this all wrong this whole time?

Twitter user @scitters created a model in which the skeleton is a complete human skeleton, turned upside-down, with only the skull flipped upright to look right at us. "Bit tired, my paint skills are a bit off tonight," they wrote.

And still, there were crazier ideas out there.

"It's obvious there's an Olympic high diver in there, doing some sorta reverse cowgirl triple-lutz backflip," wrote @doyousketch2. Obviously. We've gotta trust an expert, but which one?

Could the skeleton of the Hamburger Helper hand not be actually one medium-sized skeleton with seven smaller skeletons stacked on top of it? Why not?

One of the original poster's friends, Twitter user @G0NEGIRLLL asked a question.

"...do you accept constructive criticism?" she asked. "Of course," @soongrowtired, who started the whole Hamburger Helper skeleton thread to begin with, replied.

That's valid feedback. What do you think the real anatomy of Lefty the Hamburger Helper is, exactly? Does he have a human skeleton inside, with just a few adjustments, or does he look like a different species entirely?

Lo and behold. The true skeletal makeup of the Helper Hand. You're welcome.